Though this was not the last restaurant we went to on our trip, it was our last restaurant in Hokkaido. It was definitely the apex of high-end sushi that we had on our entire trip to Japan that year. The restaurants following this were more regional and specific to a certain style, such as chicken hot-pot in Fukuoka, a Kappo style place, which is a mix of raw and cooked dishes, slightly more casual than a kaiseki place, then a hitsumbushi/sea eel (unagi) in Hiroshima, and horse-meat basashi in Osaka. We oddly enough also went to an Italian restaurant with Japanese sensibilities in Osaka.

I digress, let’s get to the sushi. This was a true shit show, all with high-end ingredients, very rare, regional, and traditional. The chef is also quite a character and was a TV food personality at some point. He not only delivered with taste but also visual presentation and garnishings, which were artistic eye candy.

The ambiance was very intimate, warm and cozy, so I had to just set the mood with this picture above, which was the calm before the storm of umami.

Nice, yet unsanitary touch, where he asks you to open your hand and “he puts the uni in”. He should have a theme song, “I put the uni in”, very suggestive.  Like Buffalo Bill. “Put the lotion in the basket!”

“I put the uni in,” says the Sansai as he laughs diabolically.

You can imagine the conversation here via body language. He gestures, “ask for more and you get this hand in your face.” 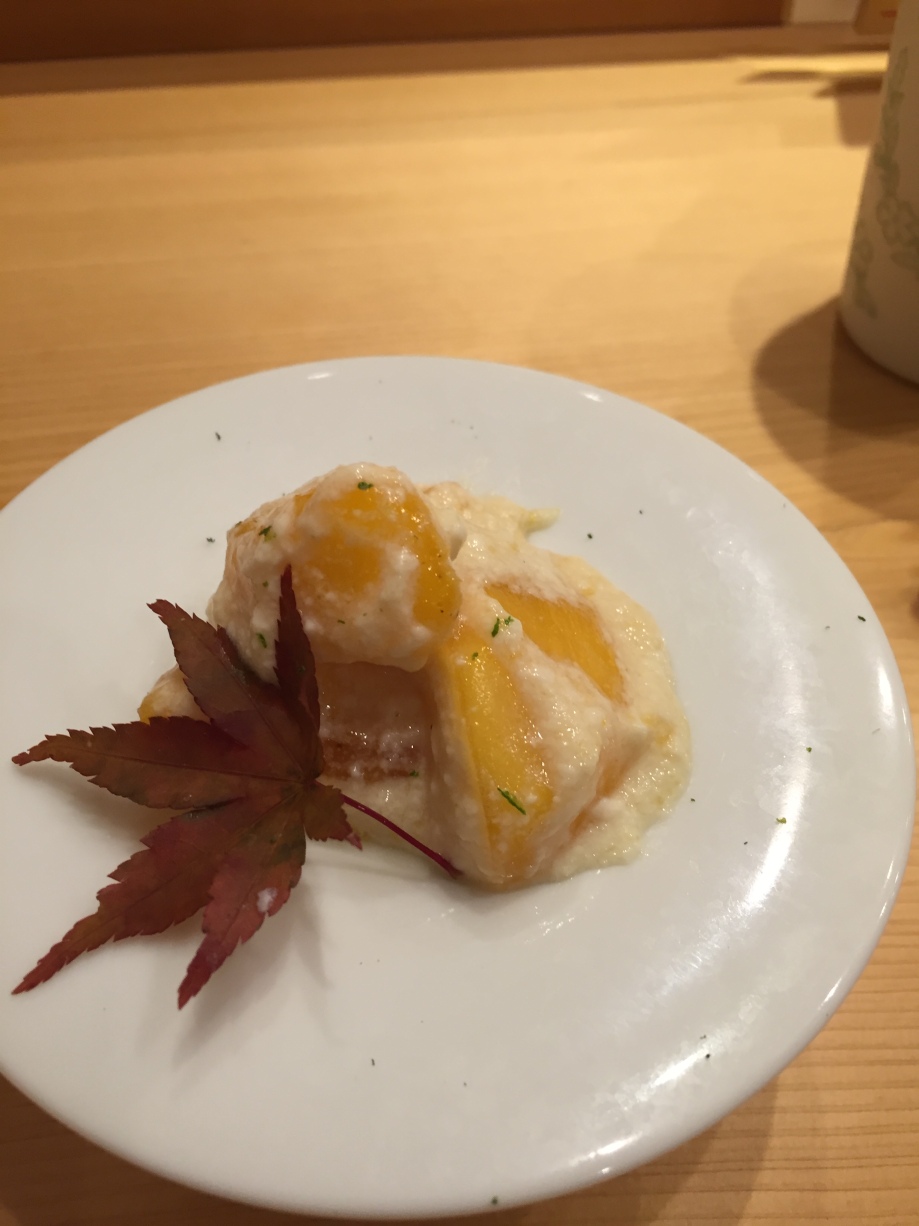 We start with the first persimmon of the season fermented in some clotted cream like miso paste. Persimmon to welcome the fall, as it was late October when we were there. This was so silky and nutty, what a mouthfeel. 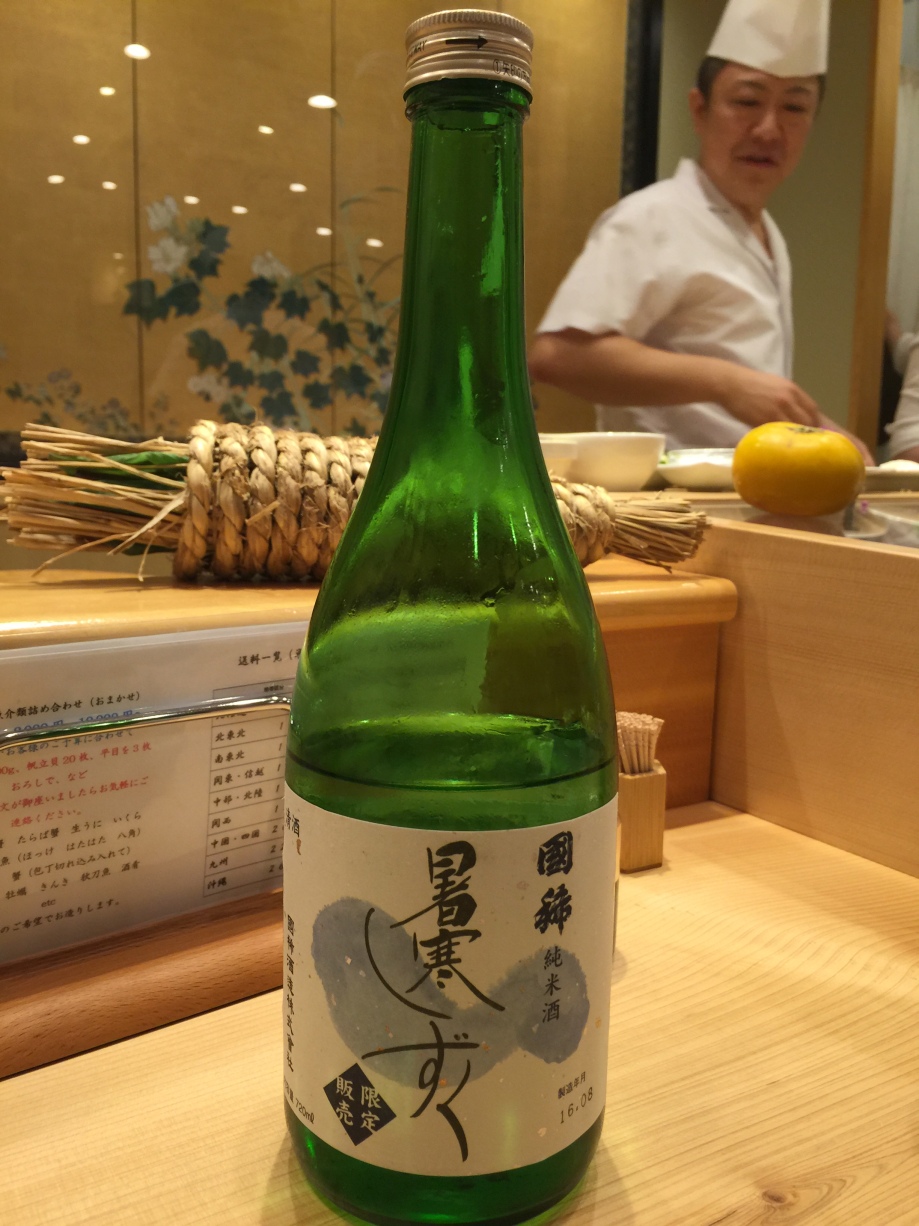 We were thoroughly juiced, as this was just the beginning of more to come. 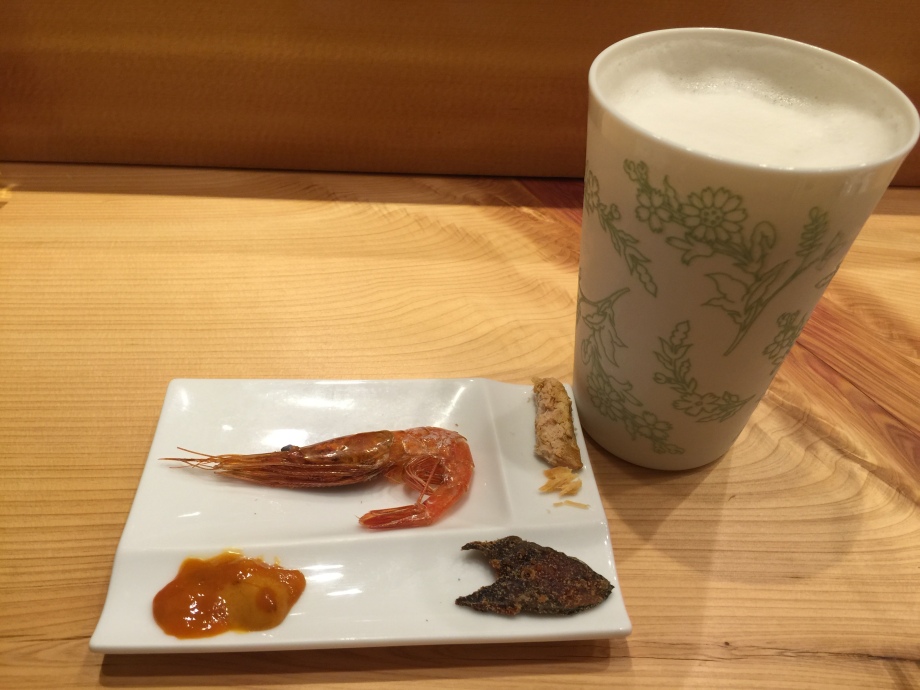 Oh, what a great pairing with some frothy beer. This was the part of the menu called “what the fishermen eat in a bar”. It consists of dried sweet shrimp, herring pickled in rice bran, uni pickled overnight in salt, and the Yamazuke was that flaky piece by the beer. Apparently, they put a piece of salmon under a mountain of salt and let it pickle in the salt for a long period of time.

Here is a close-up. Ouuu, look at that dissolved, fermented uni, looks like a Dali painting. 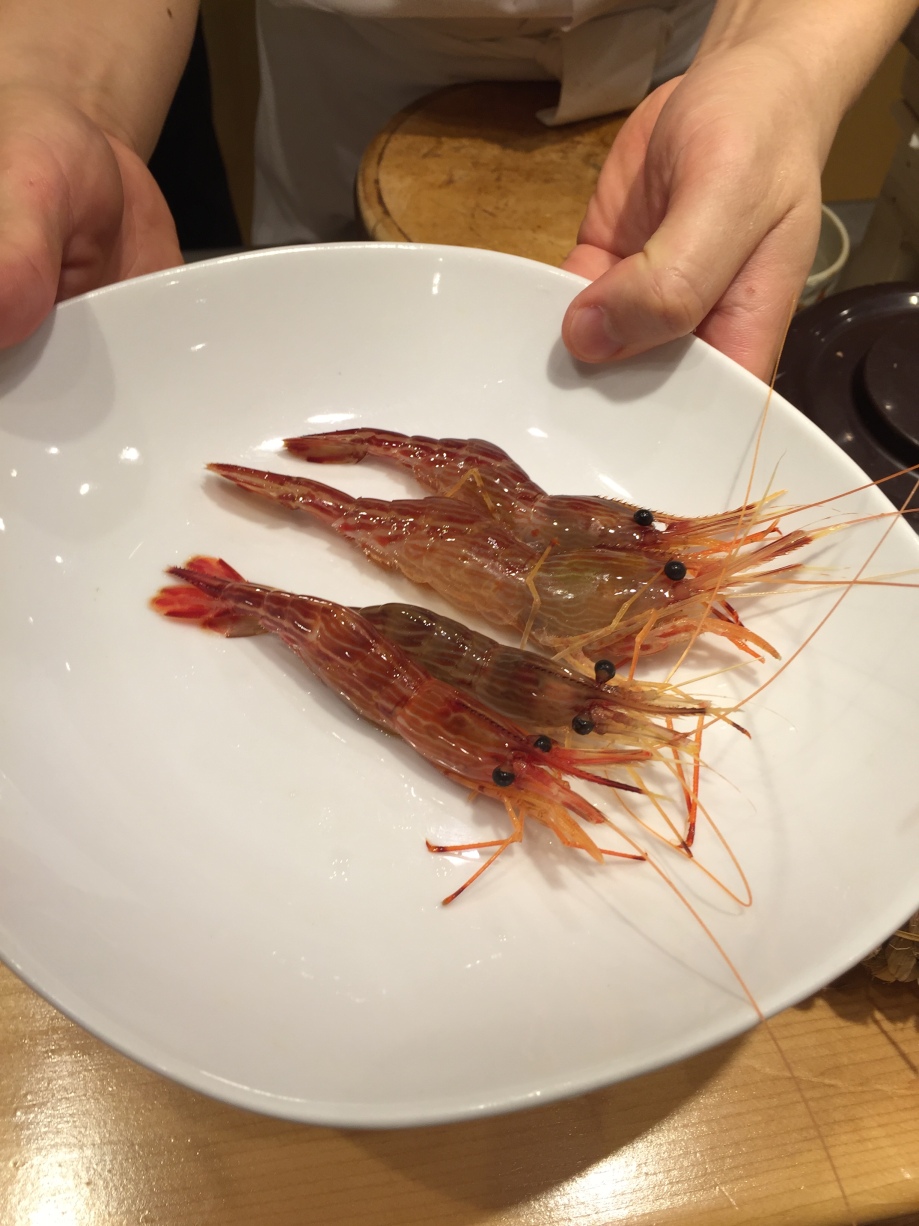 Now onto the Botan Ebi. These are the endemic sweet shrimp of Hokkaido. They have these characteristic blue eggs. This was one of the 5 items on the sashimi sampler you will see shortly.

Bonito, one of my favorite fish to eat in Japan, also on the sashimi sampler. I think they smoke this in straw, giving it a smokey infused flavor, which may also give it that dark color. It’s already a very red colored fish. 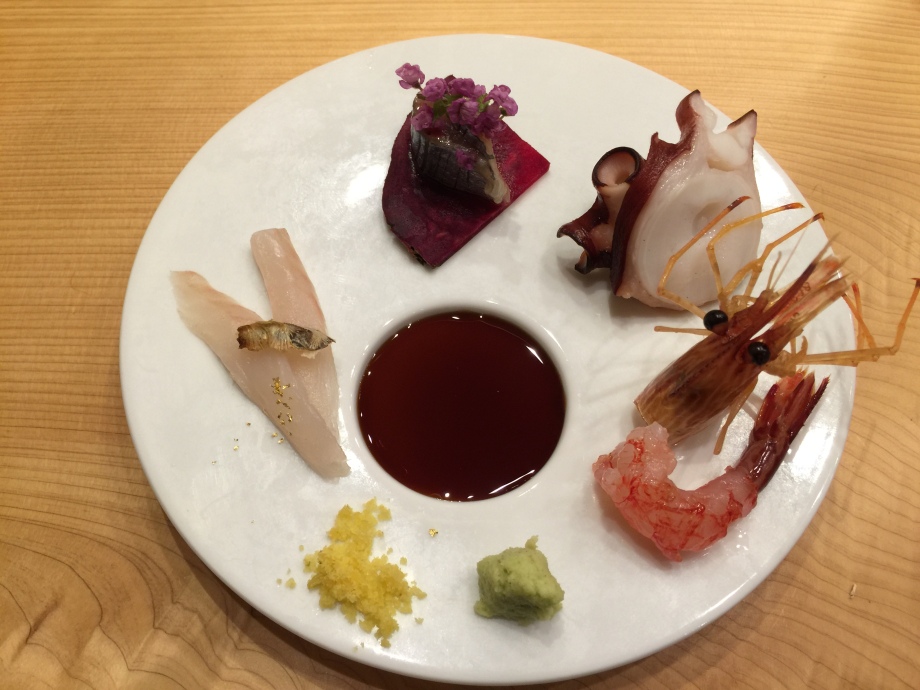 Beautiful display. The bonito topped with flowers, the octopus, Botan Ebi, and I think the other fish is a rockfish with gold flakes. 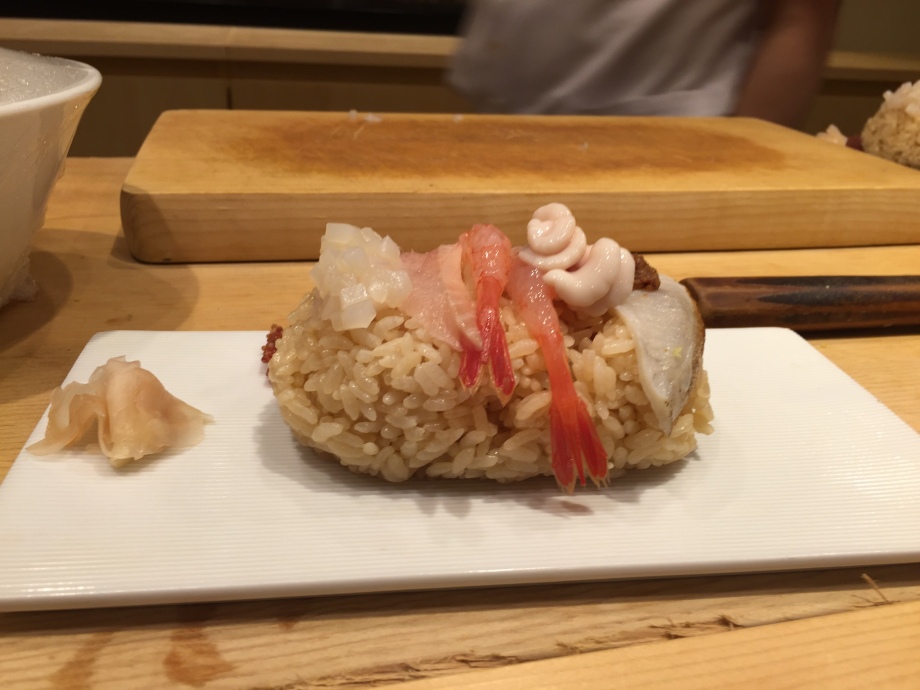 Our friends got the sushi sampler, like a giant sushi burrito, where you get a different fish with every bite. This rice was amazing, it’s not even brown rice, it’s sushi rice with a red wine vinegar marinade.

Here is the big Botan Ebi served with its roe on it’s back. Below is the aerial view. In the ponzu was more uni and squid bits. This guy was so generous with the uni, it was like a condiment for every dish that came on the side. I would seriously go back to Hokkaido just for this restaurant.

Besides live Botan Ebi, I was pleased to have live abalone, rather than the steamed and pounded preparation, this was alive in the salt water, still moving as I was eating it. Surprisingly tender and amazing. for a live abalone, the lower half had a harder tendon-like consistency, however. Again with a side of uni. I wish more things in life came with a side of uni. I wish you could get ketchup packets of uni and squirt them on things.

Then, the abalone in various ways, boiled in its own liver, the liver by itself, and then slices and grilled.

Then served with some fermented pickled with miso paste. Such slime umami here at every level. A meal fit for an Ogre like me.

This is the preparation scene in the back room… 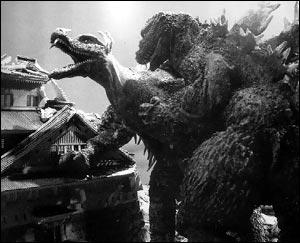 Next was the hairy crab, taken out and steamed, then put back in its shell. and baked Amazingly sweet, again side of uni, we were in heaven.

Then he started using this steam pot covered in saran wrap to slightly steam some of the fish. I had never seen anything like this, shabu-shabu sushi. 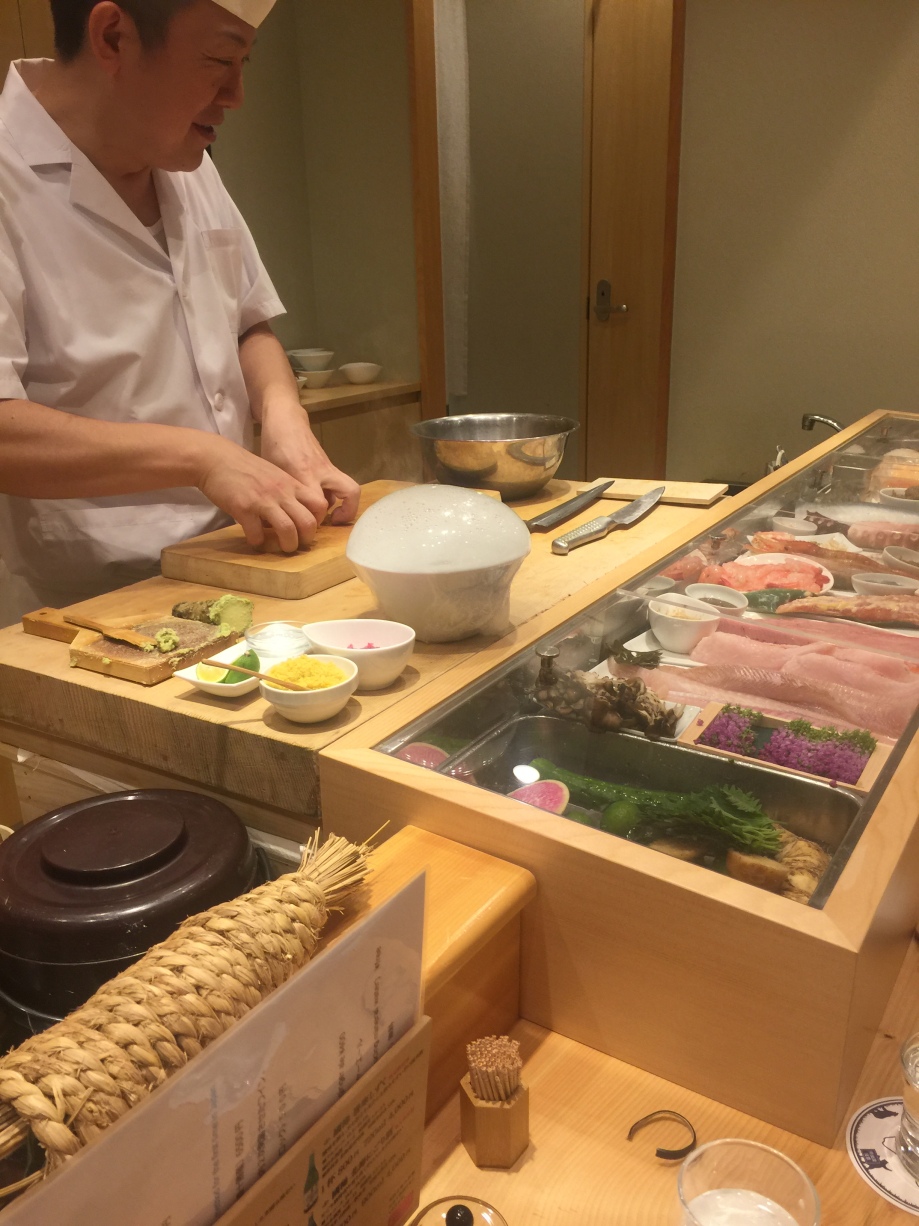 Here is the umami contraption in action. He puts caviar on top of the lightly steamed mackerel as he prepares ever more uni in little spoons. My apex in the dinner kept getting pulled higher and higher just when I thought it was time to go downhill. One pleasant surprise after another. 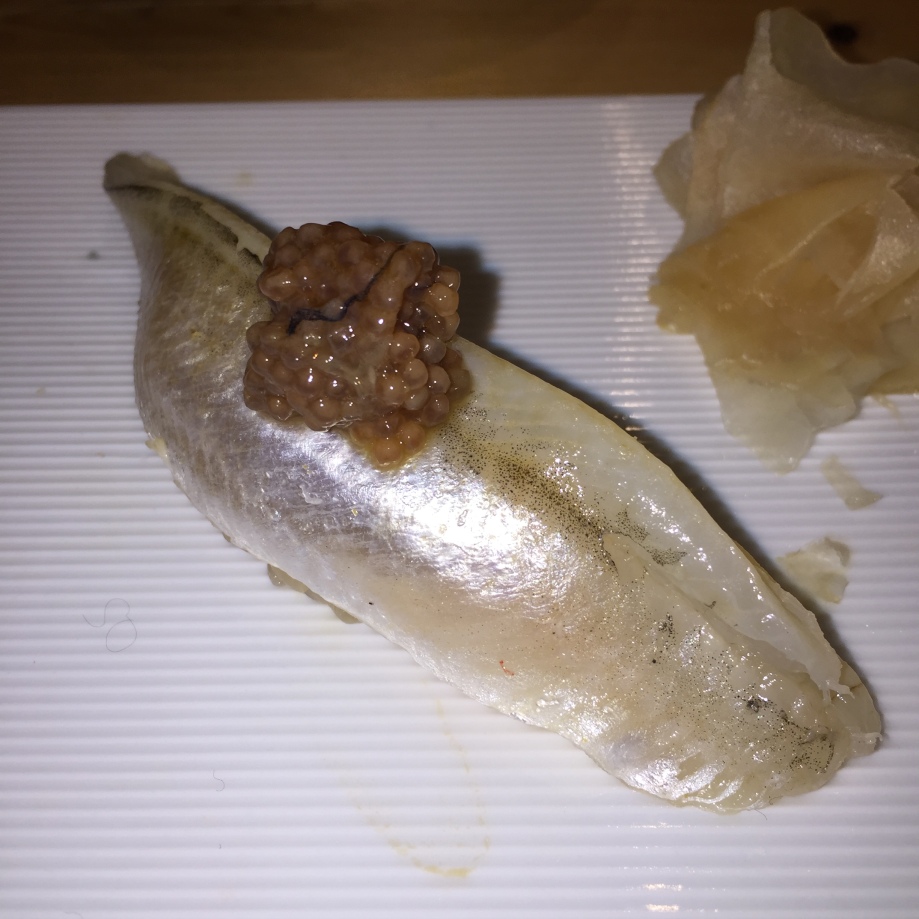 Then the most perfect pairing with the relentless uni, caramelized egg yolk. 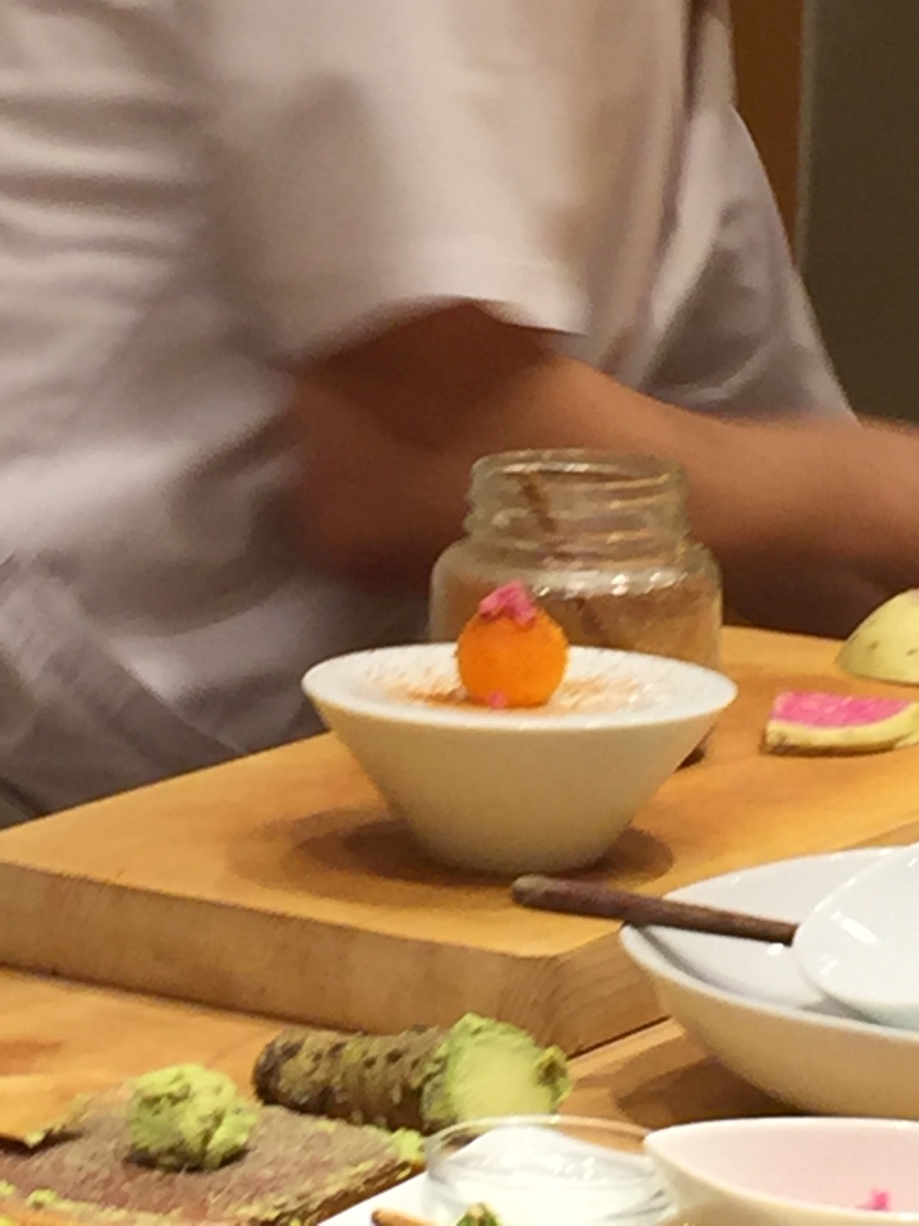 He prepared it both as a sashimi, as well as sushi.

In the meantime, the uni parade continues. This came right after the egg yolks so you can combine both bites in your mouth at the same time. Perfect pairing. He told us how he prepared it, 6 minutes boiled, then you put it in ice and the egg yolk congeals immediately. 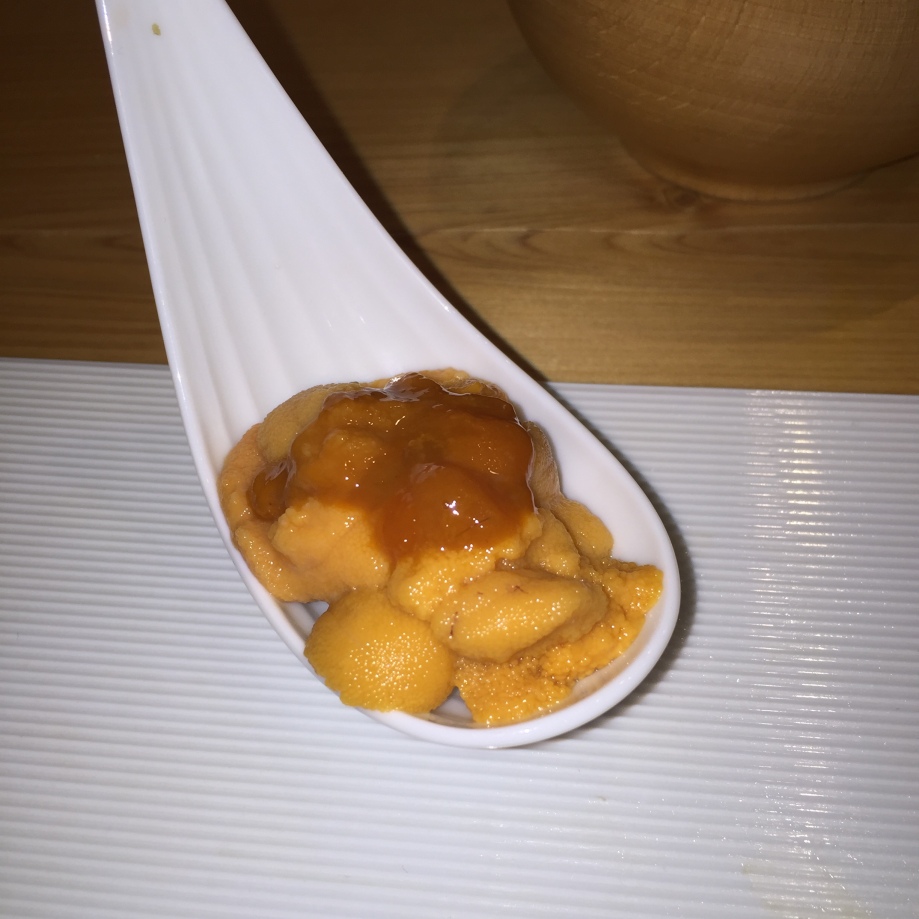 To wipe the sweet taste out and bring in the salinity, Ikura with miso past drenched toro of some sort. I was shit faced by now and stopped taking notes so apologies for not tracking the type of fish it in the photos. 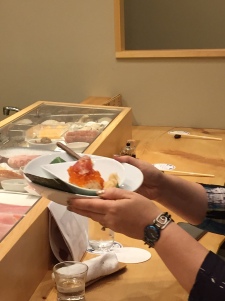 Then some clam broth to cleanse the palate.

Followed by more sushi, which I thought may have been seared albacore. 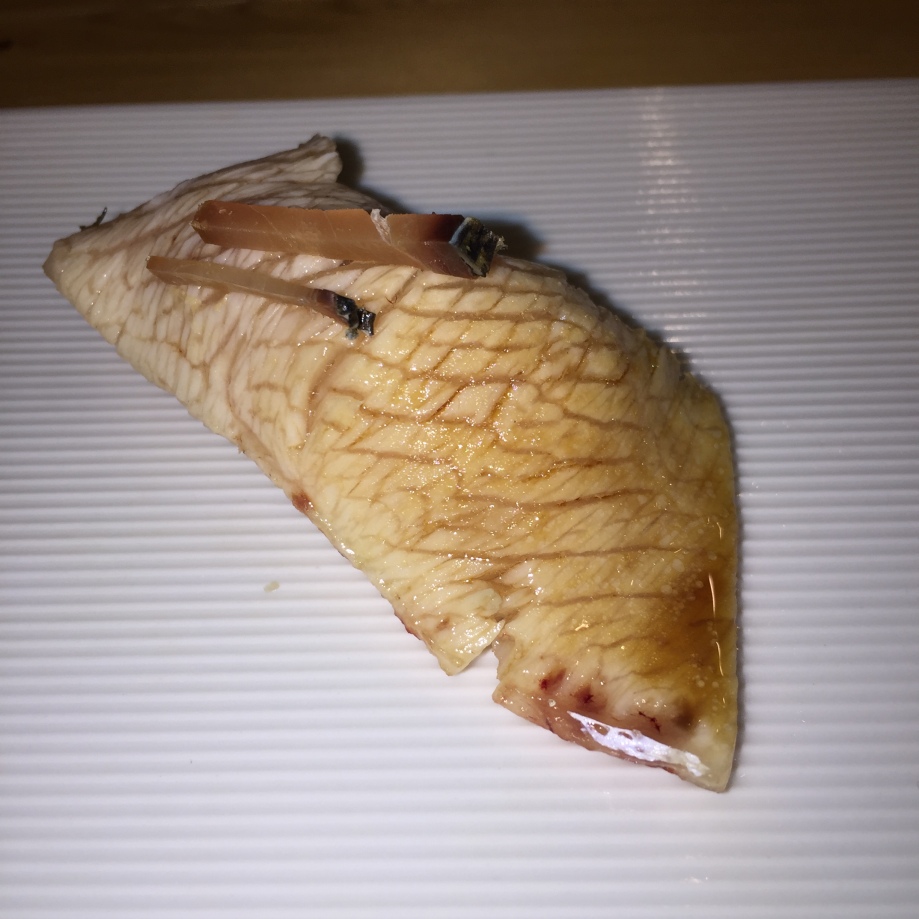 Then some sweet shrimp sushi.

Then back to the Ikura. The sequence was intentional so as to keep your tastebuds going off like a slot machine, so as to never let you acclimate, but rather go from sweet to salt and back and forth.  Then he served some other fish roe that was tiny on top of some other toro from a white fish that he minced. Then he puts caviar on top. A bonanza of roe in all shapes and sizes. 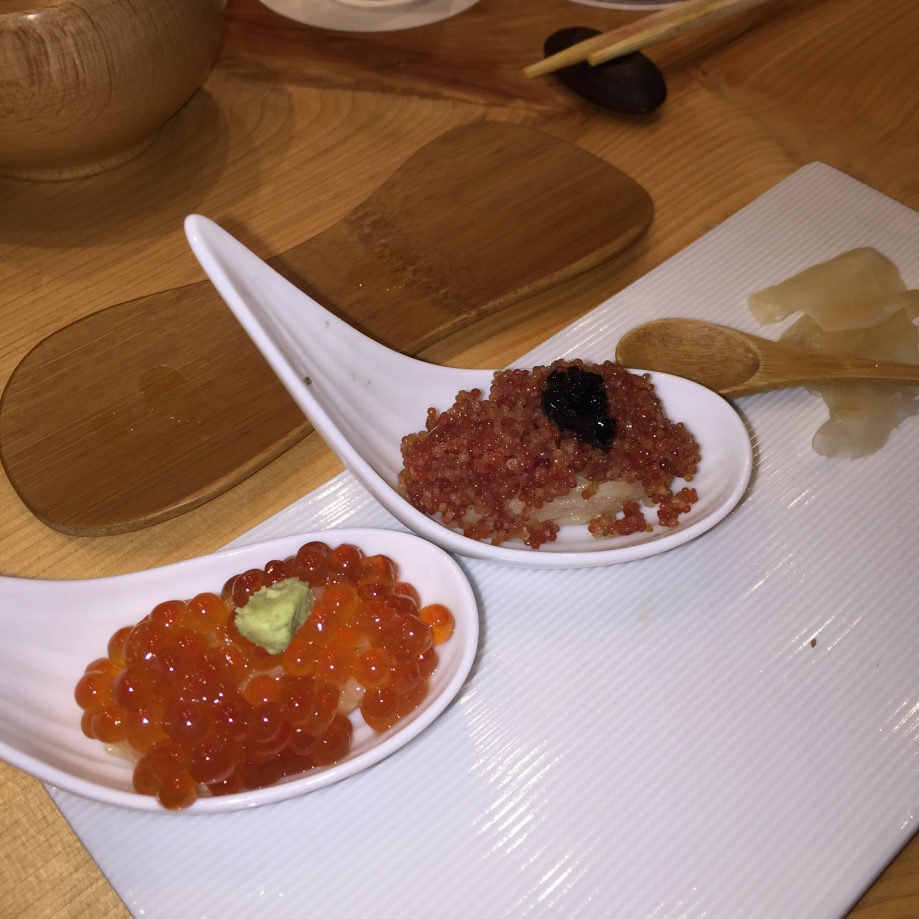 Now for the rare slimy stuff, you don’t get in the US. Sea snail, but I’m talking big bubba sea snail. Like some Lord of the Flies Piggy “I got the conch” seriousness.

Only a ‘bit poisonous’ he says.

What blew my mind was the white wasabi he pulled out, started carving, then grinding and shaving to put on top of the sea snail. It was mild and sweet but still had that zing, what a treat this was. 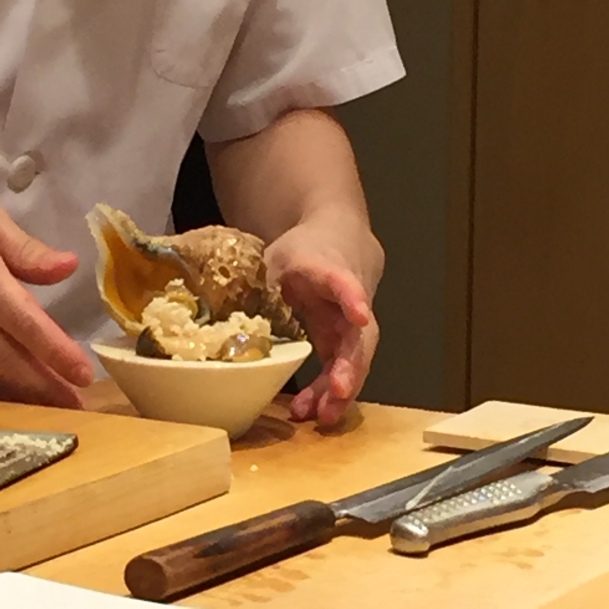 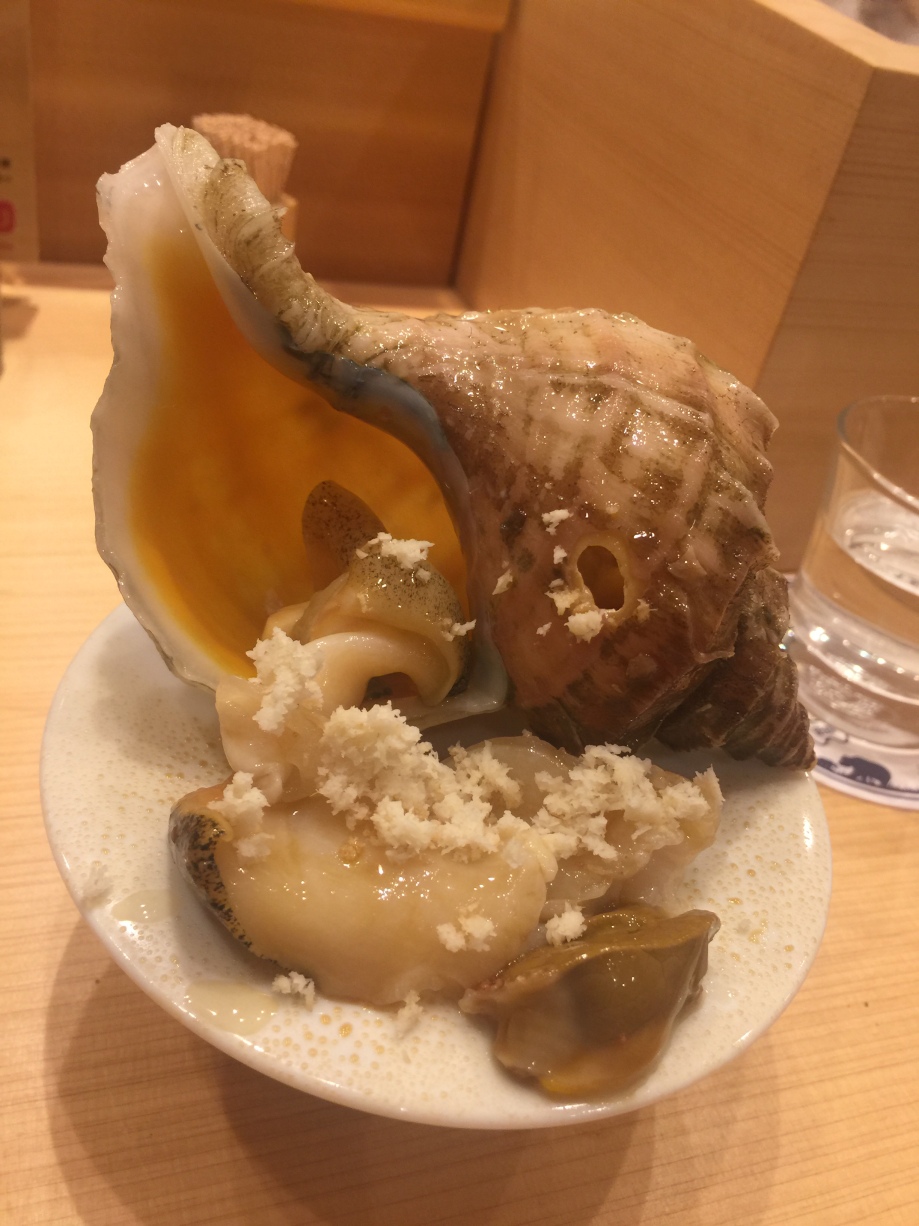 What a beautiful scene. Wow, it tasted as good as it looked. Covered in fresh ground white wasabi.

Delicious but dangerous, this should be the title of this experience we had. 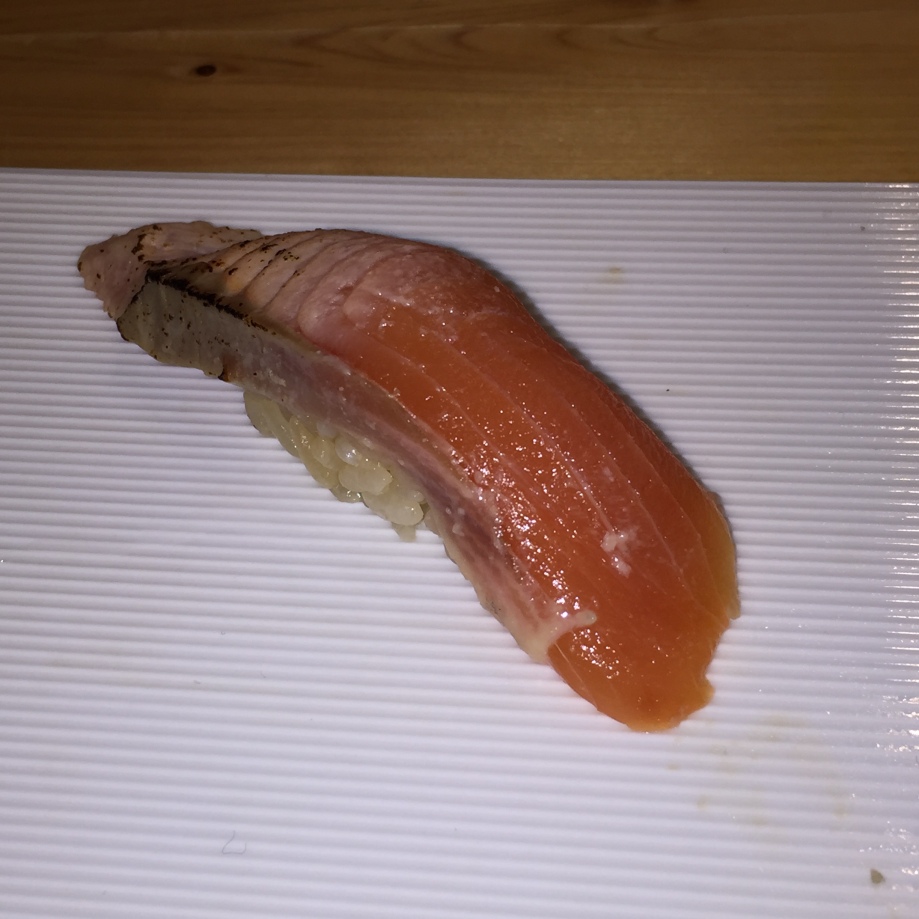 I think this was salmon or arctic char. Slightly seared on one side. On further review of menu, I think this was Channel Rockfish from Hokkaido called Kinki. It definitely looks kinky.

Wow, never had Saba like this in the US. It had a thick layer of fat underneath. Toro of Saba, outstanding. I guess because of the waters being so cold in Hokkaido, they have a thicker layer of fat, especially as the winter season was approaching, the fish was probably storing more fat to prepare. 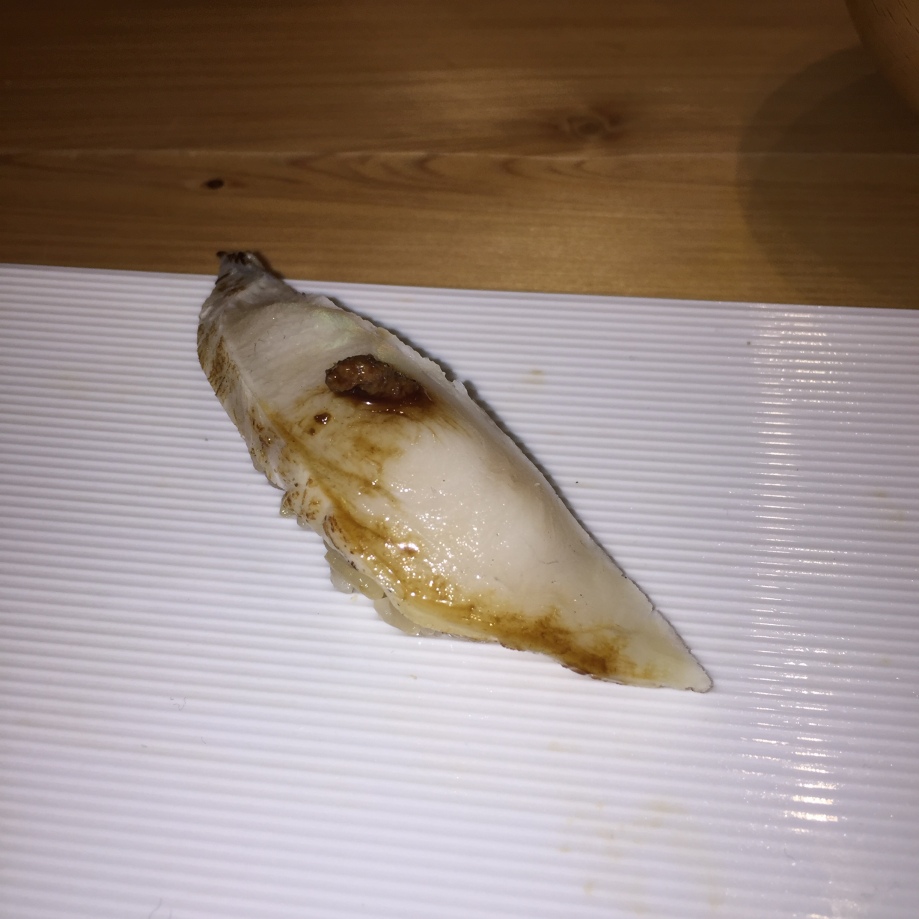 I can’t even remember what this was, but it was amazing, like everything else. It was so sad to say goodbye. What an amazing dinner. Total satisfaction. Novelty factor, taste, service, appearance, ambiance. Total dining experience. 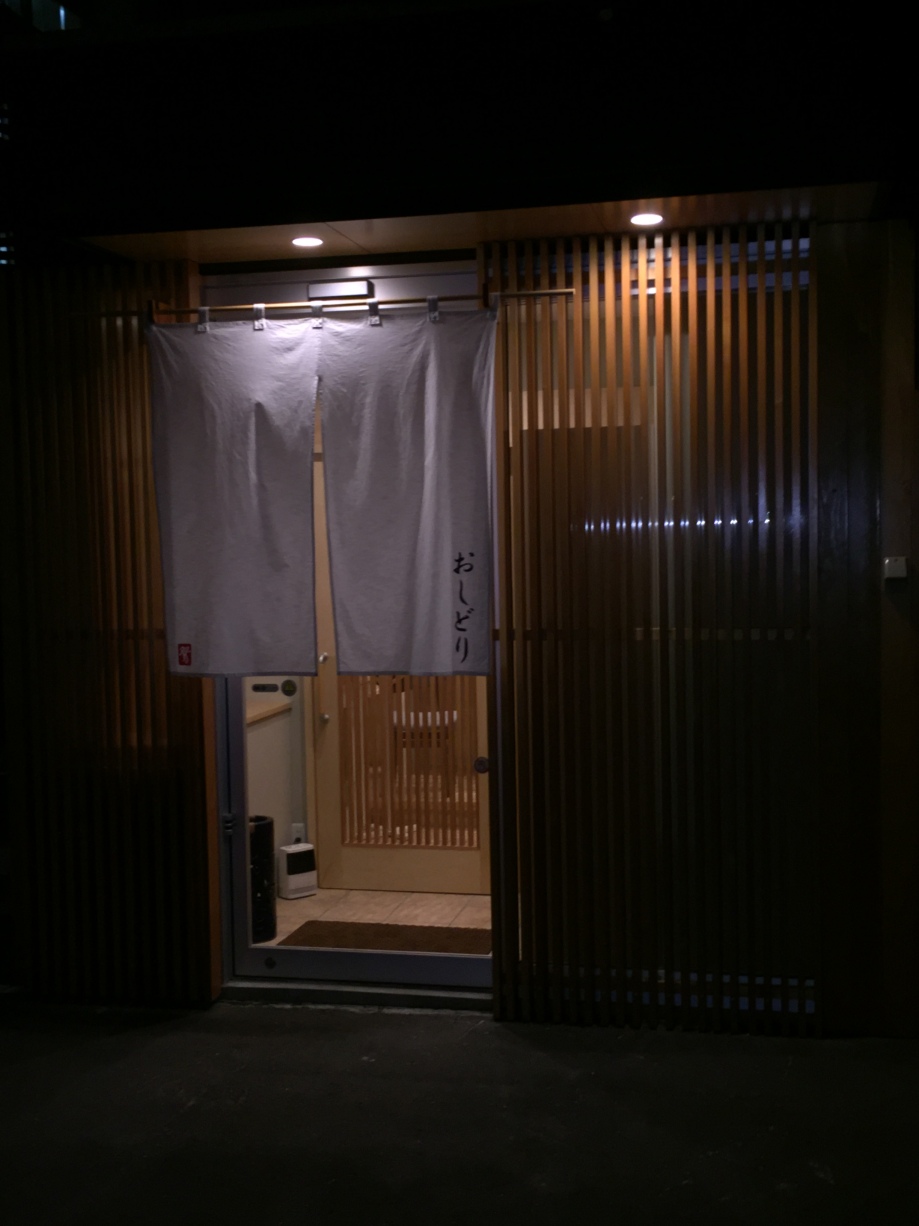 A total must go for Sapporo. Probably the highlight of our entire trip on this visit to Japan.