Besides Yamakase, this is my only other blog post about an LA restaurant. I am a native Angelino, grew up here, went to high school and college here, moved away for med school and came right back to live here for good. I have been to Providence more times than I can count, but could never post about it on my blog exactly for that reason. I also agree that though places like Shunji, Hayato, Shibumi, and Trois Mec are all 1 Michelin star worthy, and good at what they do, they are essentially classic Sushi, Kappo and molecular French venues. What is really exciting me about LA right now are places like Nightshade, Jungsik, and Manpuku. All future blog posts I will delve into, but what is beautiful about LA is the depth of the second-generation young hip Asian American chefs in this city. The second generation kids from the Chinese and Korean community in LA are like a super unique breed different from the east coast or anywhere else in the US, which is finally giving birth to this freshman class of LA restaurants shattering our schemas and giving LA the bragging rights it finally deserves when it comes to Asian food. And I’m not even Asian, I grew up with these kids in high school, who were second-generation immigrants like me. We reveled in our “otherness”, being teased by the white kids for bringing weird ethnic food like congee for lunch and rebelling through common interest like hip hop and “rice rocket” slammed cars.

I also have mixed feelings of the Michelin guide coming back to LA. The absence of the guide since 2009, gave us a convenient excuse to go to SF as much as we could and made it easy to focus on highlighting restaurants in Europe, Japan, etc.  I am frankly not surprised that there were no 3-star restaurants in LA, as the people here are too lazy to keep such a place in business, as everyone wants to go to gastropubs, or refuses to wear a blazer and nice shoes to dinner. I am also slightly irked about the Los Angeles Times doing full-blown centerfolds on all the hottest new restaurants in LA. Places that would have taken at least 2 years to get discovered and blow up are almost becoming impossible to book overnight. Case in point, Hayato. Erika and I were one of the first 5 people to eat at his inaugural dinner, and ever since he has had a meteoric rise and remains impossible to get into. 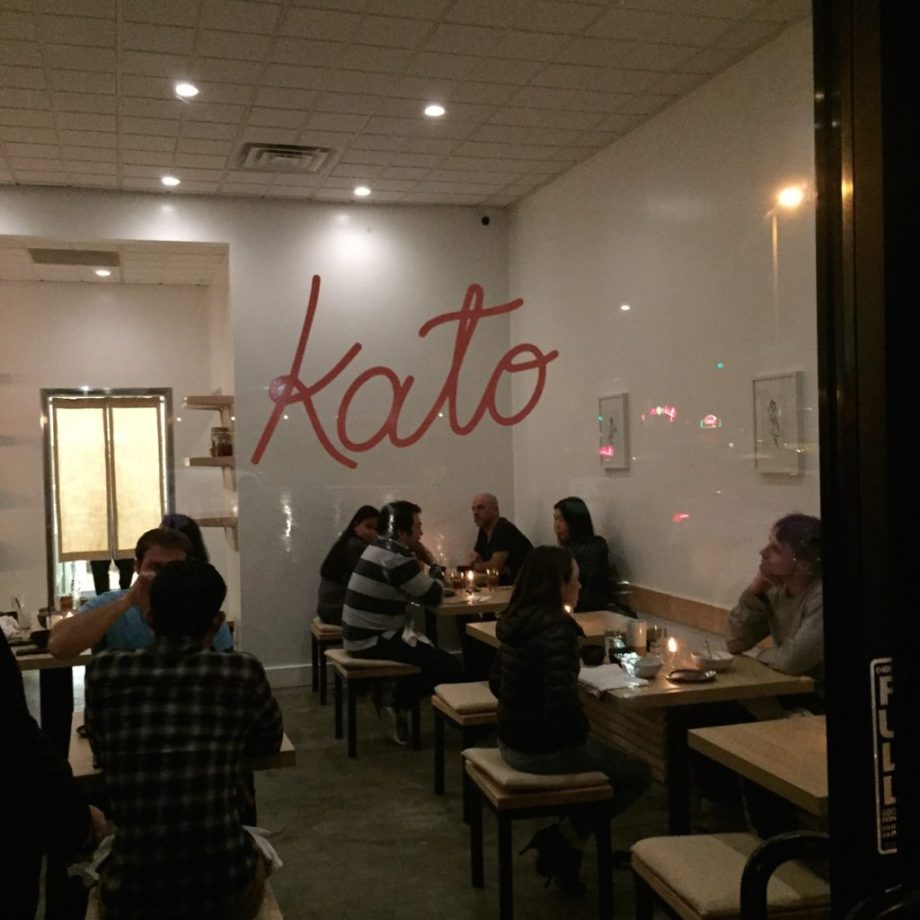 Then there is Kato, here comes a restaurant you can’t ignore. They are punching way above their weight. For the pure unexpectedness of this location in a strip mall on the Westside, my expectations were all over the place. I hate to make comparisons, but this is like a poor man’s Benu.  In no way am I being derogatory, but the value of what you get here for the price is beyond anything I have ever seen. Best kept secret; corkage. I will say no more about that. The sheer beauty of taking Taiwanese food and modernizing it in a tasting menu format is worthy of a blog post and fawning over. This was my new favorite restaurant in LA until I tried Somni on my birthday last week, which overtook first place, but let’s focus on Kato for now. I did not photo the amuse bouche as they came on a plate that was being passed around and it was do-or-die, get it before it was gone kind of thing, as I was out with my wine society. I do remember the uni tapioca being amazing, however.

I brought the middle three oddball bottles, an Eau de Vie de Prune, knowing that there were Asian deserts at the end, Time Machine Vintage aged dessert sake, and a nicely funkdified aged sake I bought in Hiroshima whose name I don’t even know, that blew my fucking socks off. It even impressed Richard Green, who is a very hard to please member of the Hollywood Food and Wine Society. I could count on champagne, riesling, and chardonnay for days from the others, so I brought the hand smuggled weird shit that I always bring back from abroad.

First up was the amberjack tomato. I think there were green tomatoes underneath. The dill almost gave it a nice sweet pickle accent to it, totally freshening the amberjack with relish-like after taste. Went great with the acidity of the Selosse champagne, which is not to be fucked with if you know about this champagne. If anything, menus heavy on the fish just give me an excuse to drink more champagne. 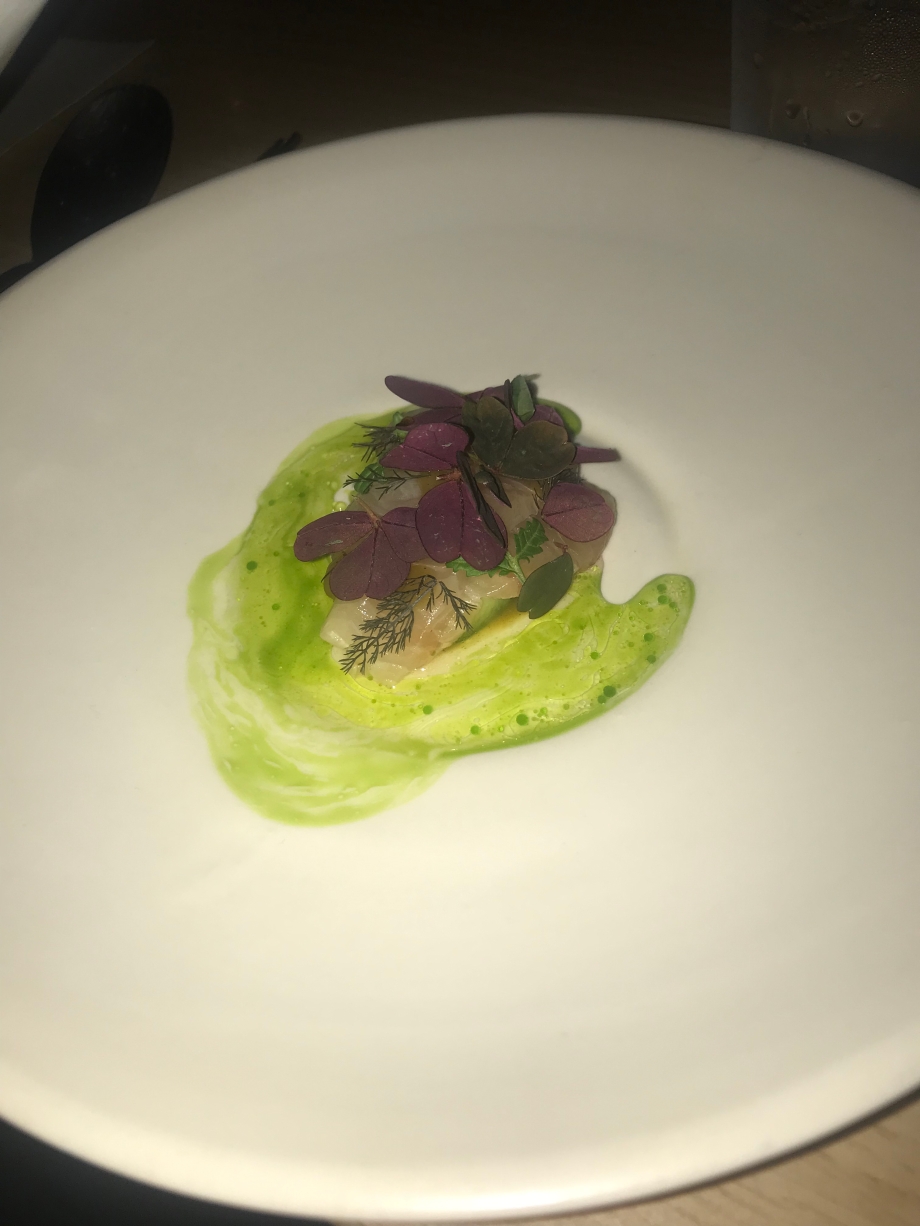 Here comes the green tomato foam, which was almost like a tomatillo consomme. First impressions were off to a good start. It just kept getting better. 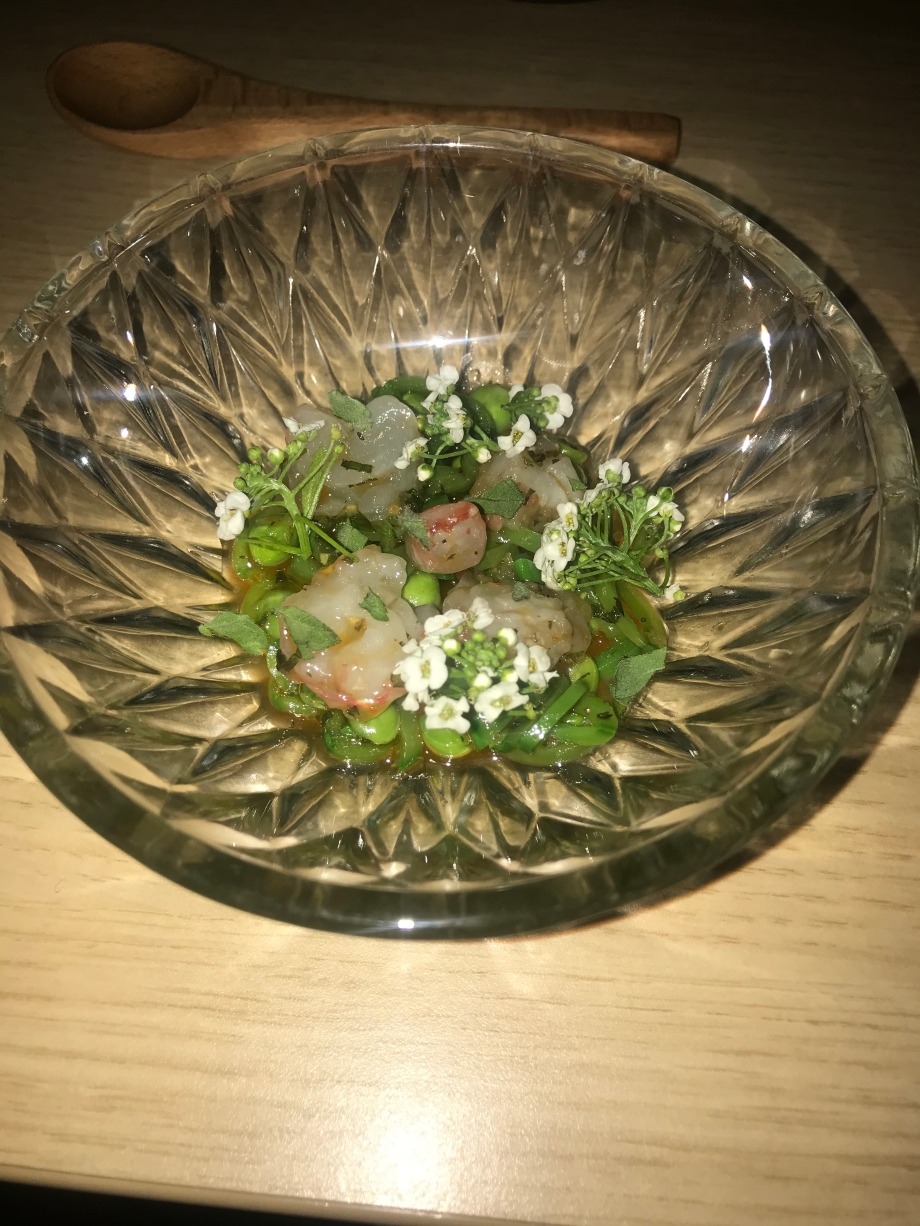 The spot prawn and peas were just damn amazing. This is like something they would serve at Providence. The freshness and pop of the peas in your mouth with the sublime sweetness of the local gem Santa Barbara spot prawn was a match made in heaven, especially with some White Burgundy to balance the sweetness or some 1981 Reisling or CA Chardonnay to complement the sweetness perhaps. One hour discussion ensued about which white varietal went best with this dish with the wine society.

I loved the Kaiseki styled bowl. I like how they were claiming this as upscale Taiwanese, which could easily be mistaken as Japanese. I like that they are highlighting how Taiwanese influenced food can be elevated to a level that usually is reserved for French/Japanese Michelin biased flavor profiles and that Chinese food does not have to be inexpensive.

There was this whole thing in the LA Times about how even these young Asian American chefs themselves fall victim to this idea that people expect to pay less when they are having Chinese food. I like that they are slowly turning this idea on its head. 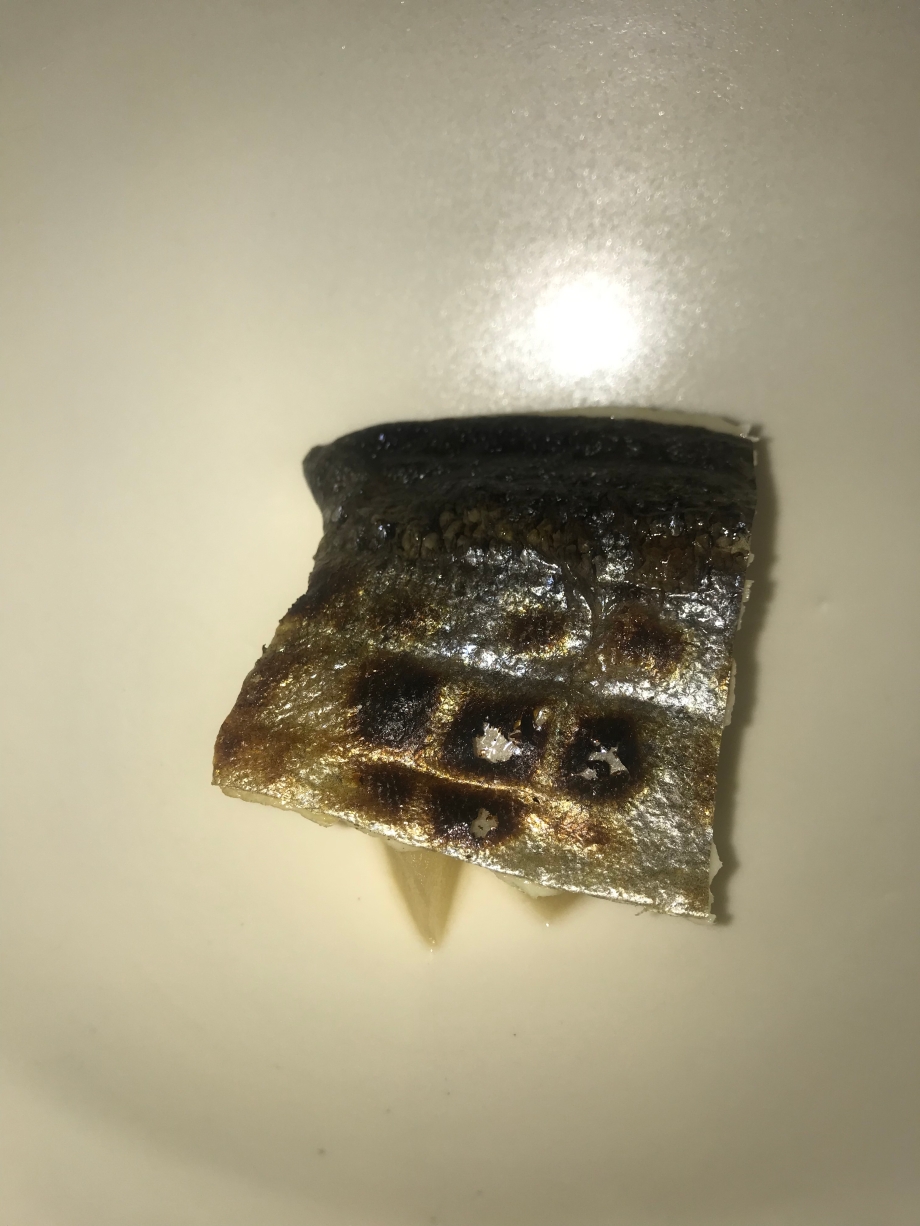 Next up was the white trout with daikon. It had that fermented cabbage broth smell to it that actually led me to transition to the sake. The fermented sake slightly overpowered this dish, so I stuck with the Beaune 1er cru for the rest of this course as it was more subtle. 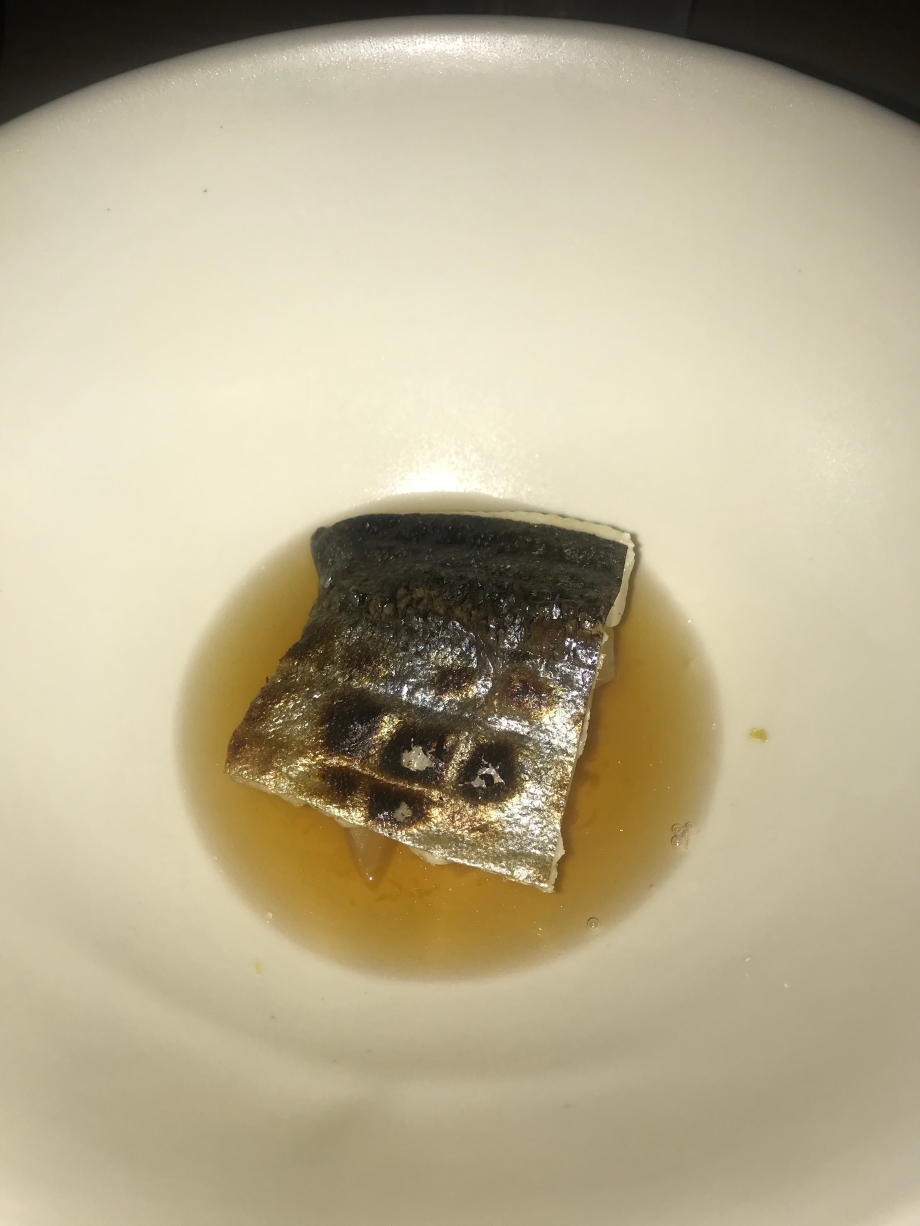 The French technique really came through in the amazing dashi consommes throughout, each with its own level of restraint or exuberance.

This has to be my favorite dish I had all night, and one of the best pairings of sake and food I have ever had in my life. This was the ocean trout with black vinegar. At first, I thought it was truffle on top, but upon closer inspection turned out to be the grilled skin seared to a crisp. This was the most Benu-like dish that immediately made me realize it was Taiwanese influenced with the vinegar. Look at the perfect sear on that fish. It had such umami and was so fatty and deep in texture, that the funky, mushroomy, chocolate fudgey, barnyardy aged sake was dancing with this in my mouth. 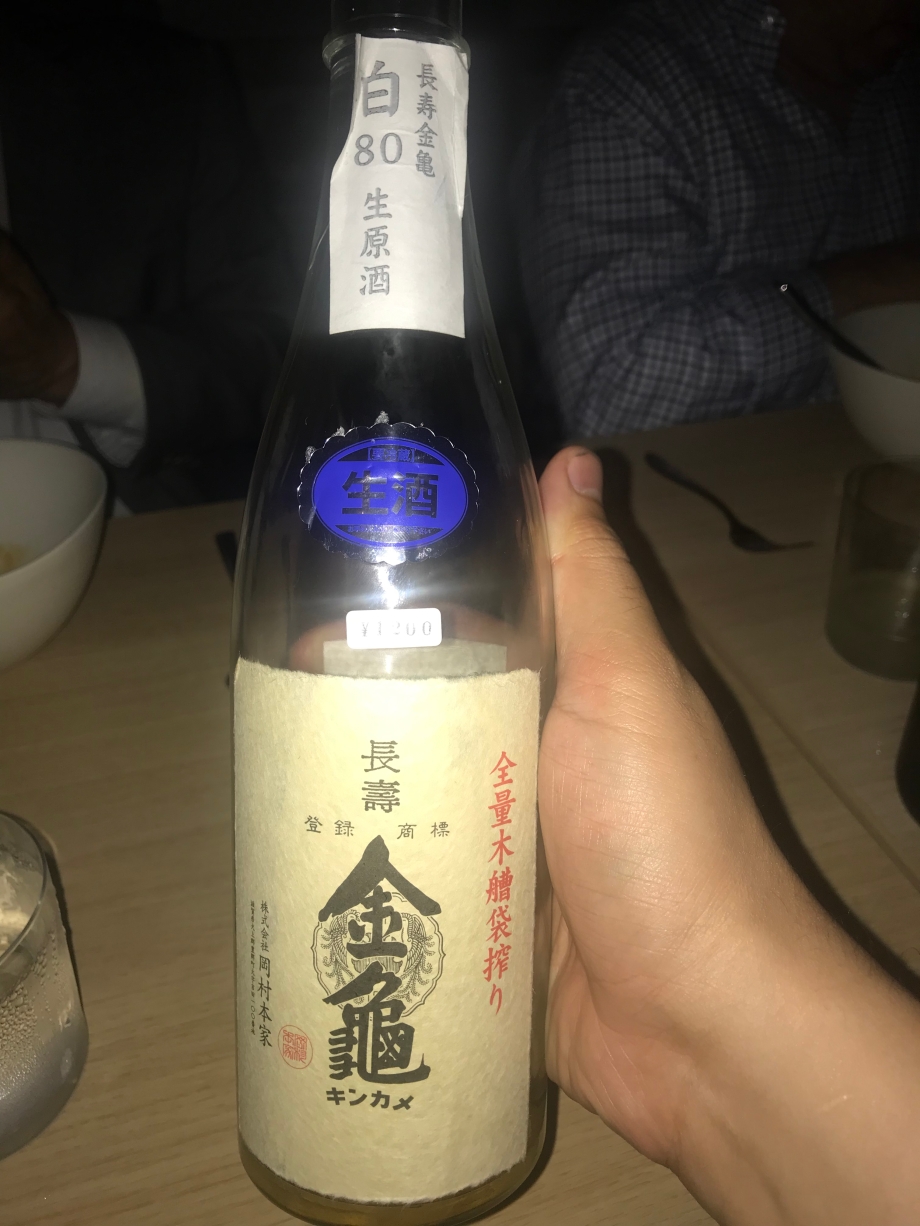 I literally told the taxi driver in Hiroshima to take me to a small hidden place that sells aged sake with an address written on a napkin by my hotel concierge and I found this bottle that I brought back in my luggage. I have no idea what it is even called.

Upon closer inspection, this is the brand:

I apparently bought the Longevity 80, from an area close to Kyoto.  What a home run, I am glad, I thought to bring this bottle to dinner tonight.

The Spanish Turbot with soy…

sprinkled with what looks like Matcha powder. Just the elegant lace-like texture of the soy sheet was amazing to look at. Again, the dashi sauce just brought it all together. They did not let me down on even a single dish here. The scallion bread came and went because we were all fighting for a piece, and it was either eat it or take a picture of it but not both.

Despite fully enjoying myself, I was afraid I would leave hungry, but the most crave-worthy dish just arrived next.

I could eat six plates of this on my own until I burst. OMFG!!! I have not had such a strong reaction to a single dish since I first tried Jitlada’s crispy pork belly pad thai. Like taking a universal dish and adding a super-rich fat-laden protein to infuse the whole damn thing. This was the loup de mer and rice, but there was some other umami bomb going on here, like bacon, or fermented plum paste. I could not figure it out, but it was in heaven.

Then the desserts. Being a grass-jelly boba fan, I could not stop making this association with the first dish. It was simply called yogurt, grape. The sour tanginess of the yogurt, with the sweet freshness of the grape slush, was a perfect tango of a pairing. I had trouble pairing this, would have gone nicely with a Dolcetto or a Sauterne, but the Eau de Vin de Prune was not a bad substitute. I even went back to the Riesling for this one. 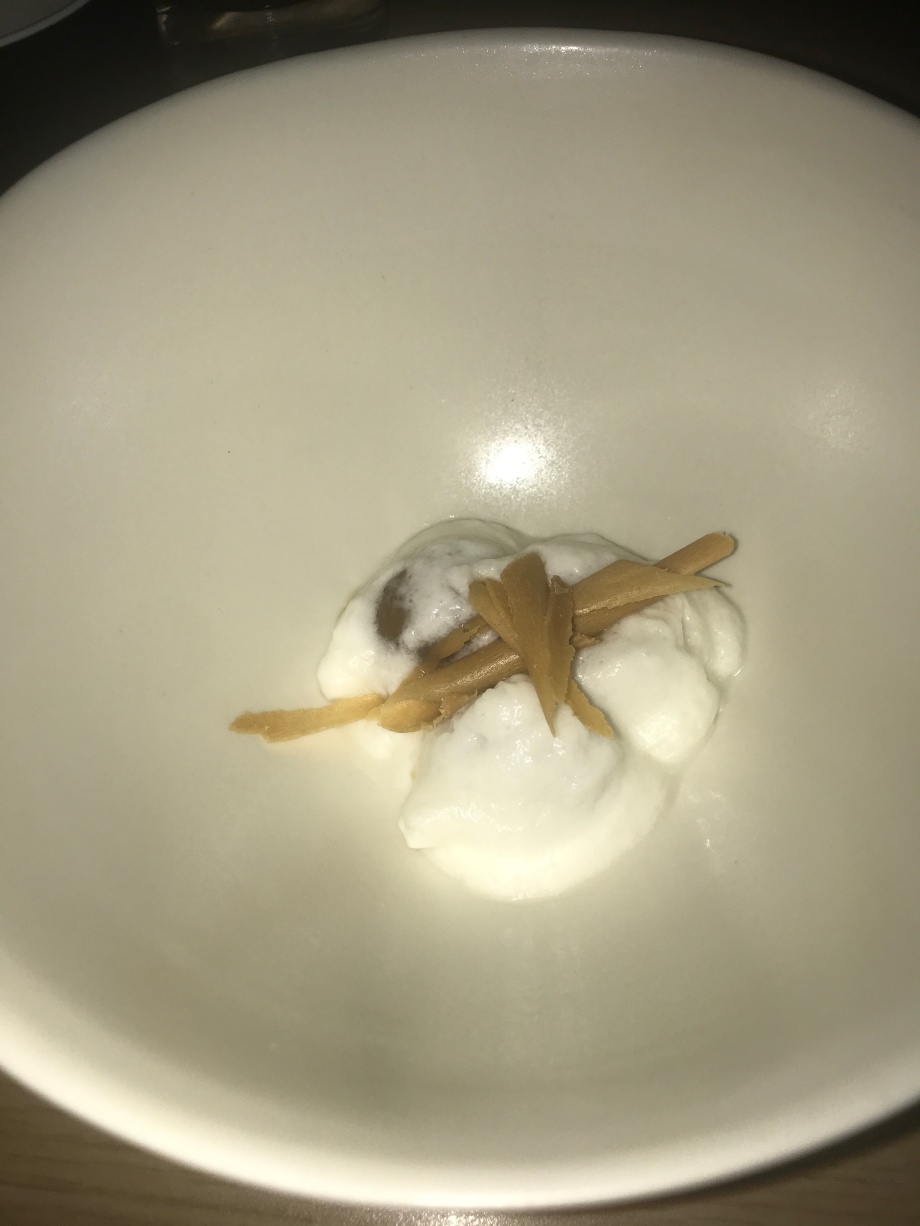 Then the sweet potato for a more savory dessert. Wow, rich yet light, and I had to Thank the infamous Richard Green for the atomic bomb pairing for this dish.

Good fucking God, this was a no holds barred baller style dinner. What a damn pairing. Candied yams, salty, sweet, intensely alcoholic, the mouthfeel, the finish of the bourbon. All I needed was a cigar to finish this night off.

Kentucky Bourbon and sweet potato, does it get more southern than that?

Here is the line up for the night. Damn it feels good to be a wine society member.

All jokes aside, this was like all in $100-120/person. Best damn value in LA. Once again, comes back to the discussion of value given to Chinese cuisine with a Western perspective. All I can say is “I see you” Kato, no hegemonic racist bias can fool me to think this should cost less. In fact, you should jack your prices up to convince all the doubters.

In fact, I spoke too soon…