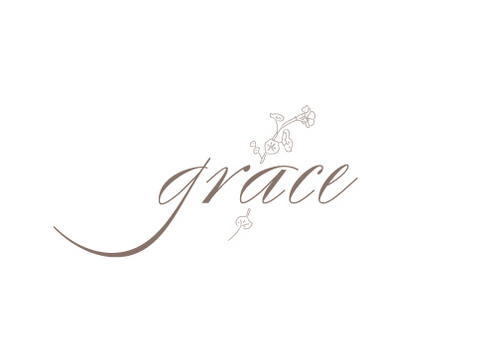 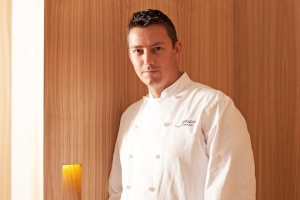 So we were very pleased with Grace. Curtis Duffy was amazing. What was extra special about this place was the personalization and attention to detail and service. With regards to service, it was one of the best experiences we’ve ever had in the US. They completely made us feel like we were the only people in the restaurant and everyone else there were just extras on a movie set. It was as if we had a set of 3-4 waiters that only attended to us at all times. It was truly ridiculous, as I like to say. This is what 3 Michelin star quality is all about. It’s that extra umph. I can’t even put it into words, it was not ‘Japanese-type’ of service, where they were quietly bowing and expressing subtleties, it was more like Mexican grandma service. I don’t even know how to explain this, like a non-intrusive, warm, non-chalant, yet respectful, it’s all about you not me kind of attitude. Open ended questions, truly curious about and interested in us, our likes, and dislikes. It was like getting a tailor-made suit made for you. Again, in a non-intrusive, non-groveling, yet super personal way. I wanted to give the guy a hug at the end for the way he treated us. I think I was so drunk that I actually did. He gave us a damn bottle of pear cider and the last of the entire Bruchladdich MCMLXXXV bottle to take home as a souvenir. It was like, “Sir, I noticed your facial experession when you were having the cider and the scotch, so this is our gift to you. I was decided that this truly would make your night” kind of service. Like, “Is this really happening?” 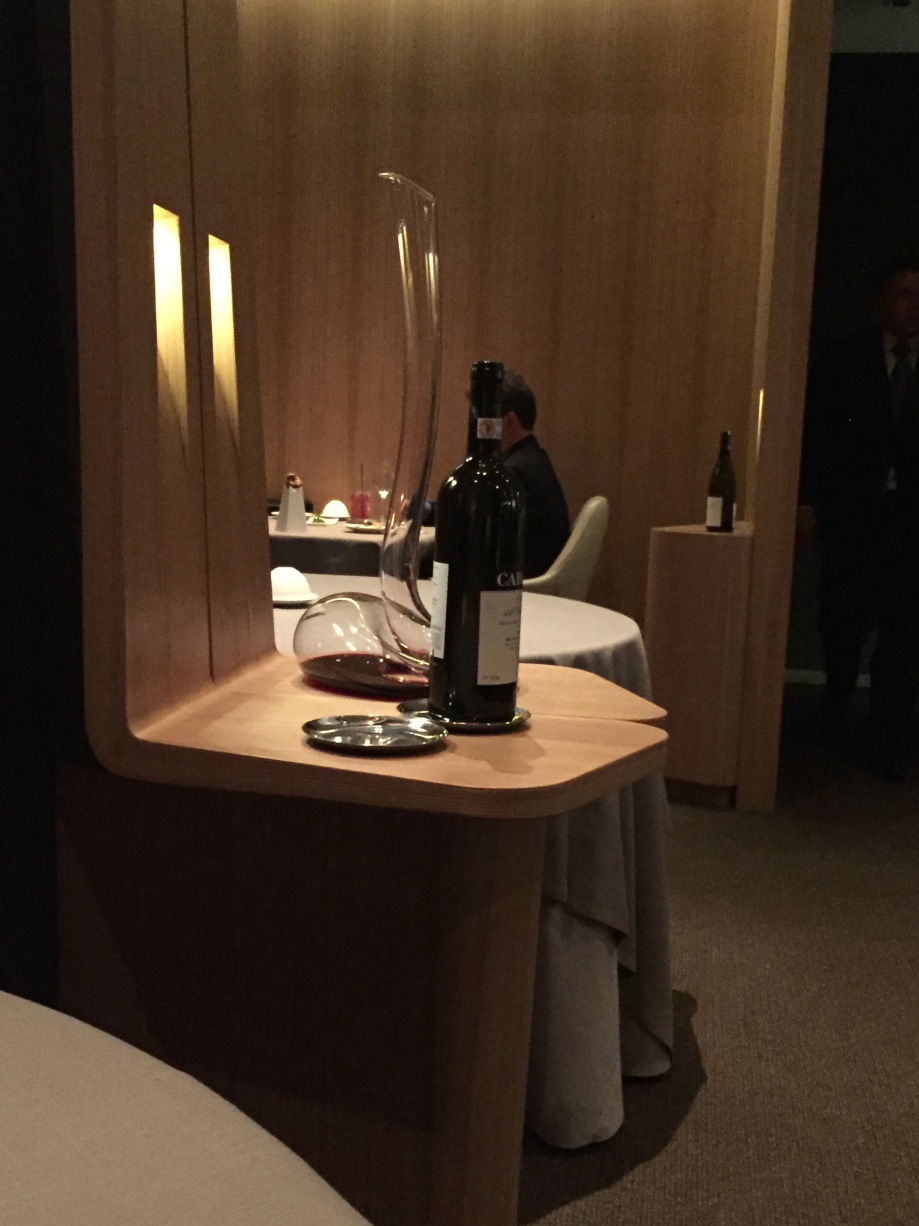 Before the food, look at the damn Eve decanter by Riedel. I had to buy one of these. I told Erika to have all her family members pool their Christmas gift money to buy me this one gift for Christmas, what a damn Scrooge I am. One of the best presents I’ve been gifted though. The wrist action that it takes to aerate the wine in this contraption and get it out of the snake truly requires the technique and strength of an adolescent wanker.

The lighting was difficult and they did not let you take pictures with flash, so the pictures may be a bit dark. This was the first of the amuse bouche dishes, it was a tea ball that exploded in your mouth. I think it had some sort of white darjeling tea, or something super fragrant like that, which they grown in their own garden. There was one additional amuse bouche of a house churned real vanilla ice cream in a mini-cone, that came on a giant wooden palate that we just picked the cones out from. I couldn’t crop out our faces to show the ice cream cone in isolation so that picture was not posted.

This was the first flash photo we took before they threatened to confiscate our phone. It was three separate amuse bouches perched on those hot massage stones and pine branches. We totally forgot to write down what we thought it was and forgot to ask them as we were so transported to our first Alinea experience with the pine branches and shaved ice. Nice cross over that he brought from Alinea since he was there for so long. I think that the little bite in the broth may have been a cross section of octopus. Anyhow, this was a sign of all the goodness to come. I was getting excited with seeing the pine branch props, such a sucker for theatrics. 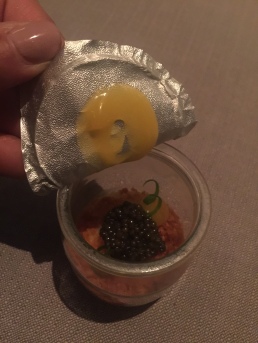 First up, Osetra caviar, with brandade, lemon and scallion. Brandade is an emulsion of salt cod and olive oil eaten in winter with bread or potatoes. This was a lovely amalgamation of ingredients and the melding of the lemon curd with the smoked aroma that came out of the flask upon lifting the gold tin seal, carried the Alinea torch of totally nailing the olfactory component of molecular cuisine. This is truly complex, yet subtle, but not trying too hard, yet it blows you away. It takes you to another place, like when the Alinea version of the olfactory vehicle of flavor delivery is supposed to remind you of autumn when you rake the leaves and then burn them. The osetra with the brandade was so nice and briny, with velvety/buttery texture that just coated your mouth, with the smell of the smoke still in you nostrils as you eat. Sophisticated, masterful ninja level witchery was going on here. I was just thinking to myself, “Damn, this guy is coming out swinging, we barely started!”

Wow, just pause for a minute and look at this work of art. It is almost three dimensional. This is his signature dish that won him the James Beard award. Beautiful is all we could say. It was like you were drowning in an ocean of gastronomy and just as you come up for air another wave of beauty hits you and pulls you back down. We had to sneak in another flash photo of this dish. If you look at the top of the page you will see a profile view of the same dish in a different glass. This is his Alaskan snow crab preparation. I’ll use smaller examples of the non-flash versions below. The snow crab underneath with the Ikura and cold cucumber gazpacho with sudachi, which is like yuzu, was so damn refreshing and clean tasting, with the sweetness of the crab and the little mint accents.

Then came the hiramasa crudo with cannellini beans, zuchini and squash blossoms, very Japanese meets Italian, meets Mexico City. Hiramasa is yellowtail amberjack, one of our favorite white fish varieties usually found at authentic sushi spots. The fish wrapped around the squash blossom led to an interesting crunch with the soft flesh of the amberjack on top. The sweetness of the beans gave it a depth that broadened the flavor profile beyond just the fish. We thought it was unique to see sushi grade fish with sweat beans. Though an odd pairing, it worked well. Reminded us of the oyster inside squash blossom from Meadowood. Squash blossom seems to be a popular vehicle for presenting seafood nowadays at molecular spots. 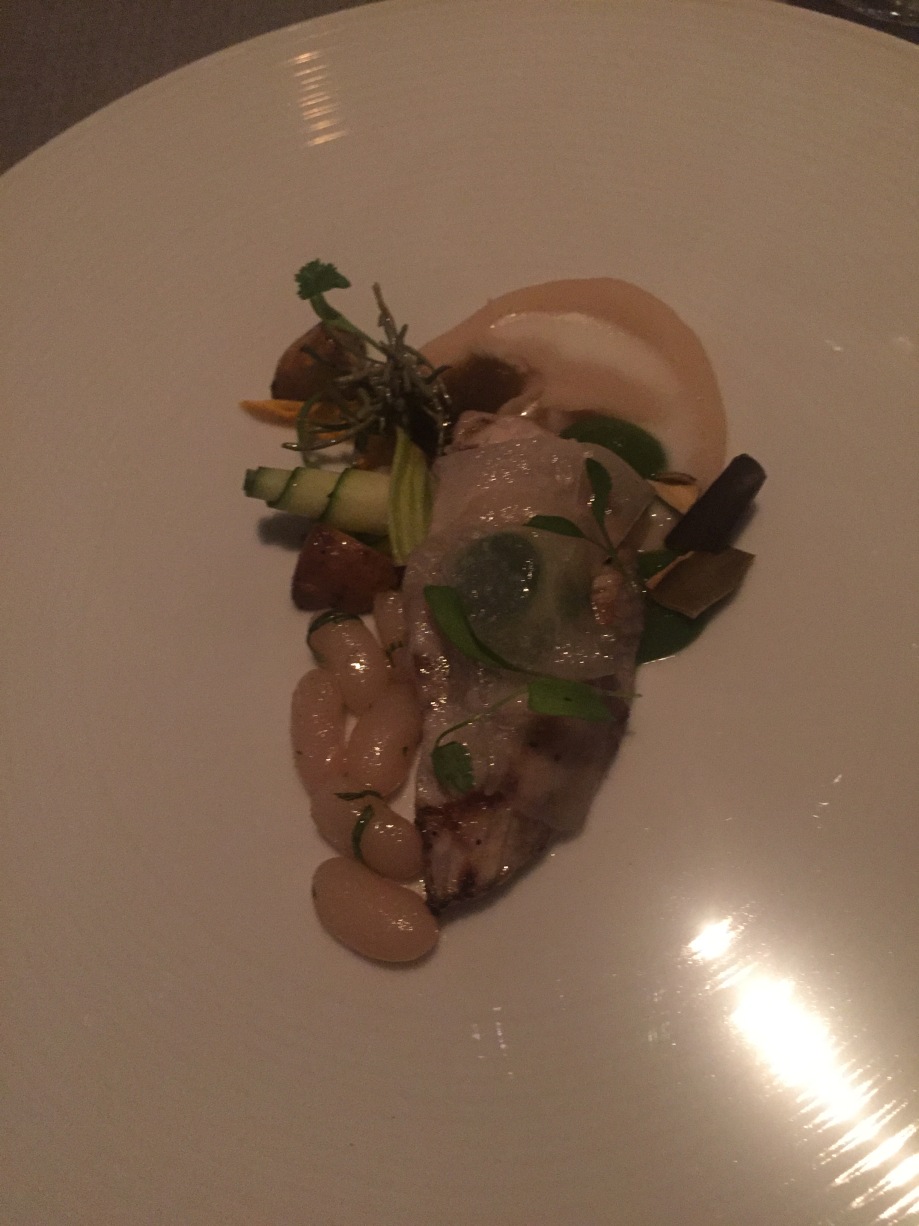 This was followed by the squab, which although lovely appearing, did not do much for us. We subconsciously even forgot to take a picture of it. It was the lull before the storm, when the exoticism began again with the pig tail seen below. It was prepared chicharron style, with endive, cauliflower and oxalis. Just how we embraced pig ear salad at Animal, we were happy to finally see this Mexican delicacy at a top molecular spot. Afterall, El Chapo’s narcotic empire’s hub was in Chicago, where there is also a large Mexican population, so it was fitting to see the Mexican influence in the food and also the waitstaff who were primarily young Mexican Americans. 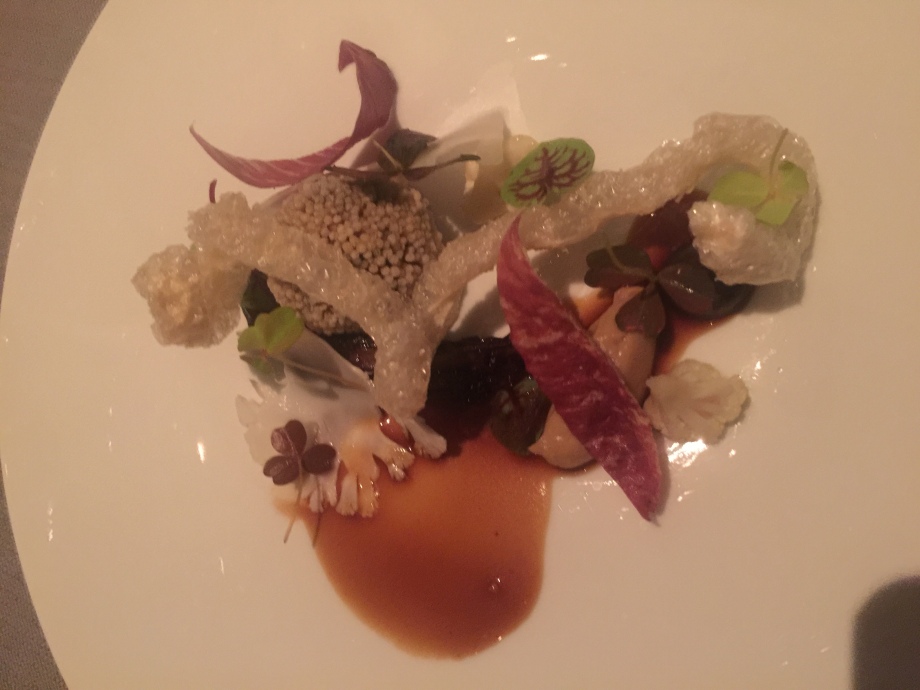 Then came the extra bonus points. White truffle agnolotti supplemental dish that was not on the flora nor fauna menus, with a obelisc of alba white truffle showing it off like the damn trophy that it is, shaved like a pencil to the eraser line all over our little agnolotti dumplings.

Plate looks like a bowl of milk splatering in slow motion with stop-frame photography. 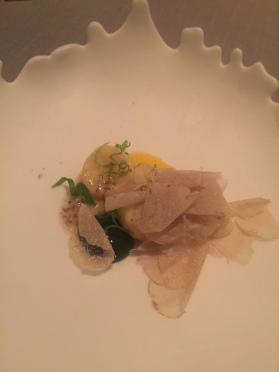 Then the crescendo before dessert started. A5 Mizayake Kobe with vitnamese herbs, romaine and peanut. I was skeptical of the mustard sauce, again, possible corned beef with mustard Chicago reference. Then, very Japanese wagyu served with Vietnamese accoutrements, lemongrass broth again, which we noticed the night before at Tru. It’s like they all spy on each other at the Michelin places to see what the other is doing and steal a ideas from each other. What was interesting is that they served the A5 Kobe 2 ways, raw/sliced shabu style and also seared to perfection at just the right thickness, like at Providence. The peanut made it taste like we were eating shabu, the romaine? They should have done napa cabbage in our opinion, if he was going for the shabu theme. Nevertheless, A5 Kobe this good, done 2 ways, we’re not complaining. It’s hard being creative, even if you are mashing Thai, Vietnamese and Japanese, which we would have otherwise normally scoffed at the Asian fusion concept.

Then Hazelnut, apple, brown butter sorrel for dessert. I really can’t remember the flavors of this dessert. My mind may have been erased by the last dessert. Anyhow, it looked pretty. This was where the amazing pear cider from Tru was brought back out from when we had it the night befor to our great suprise. 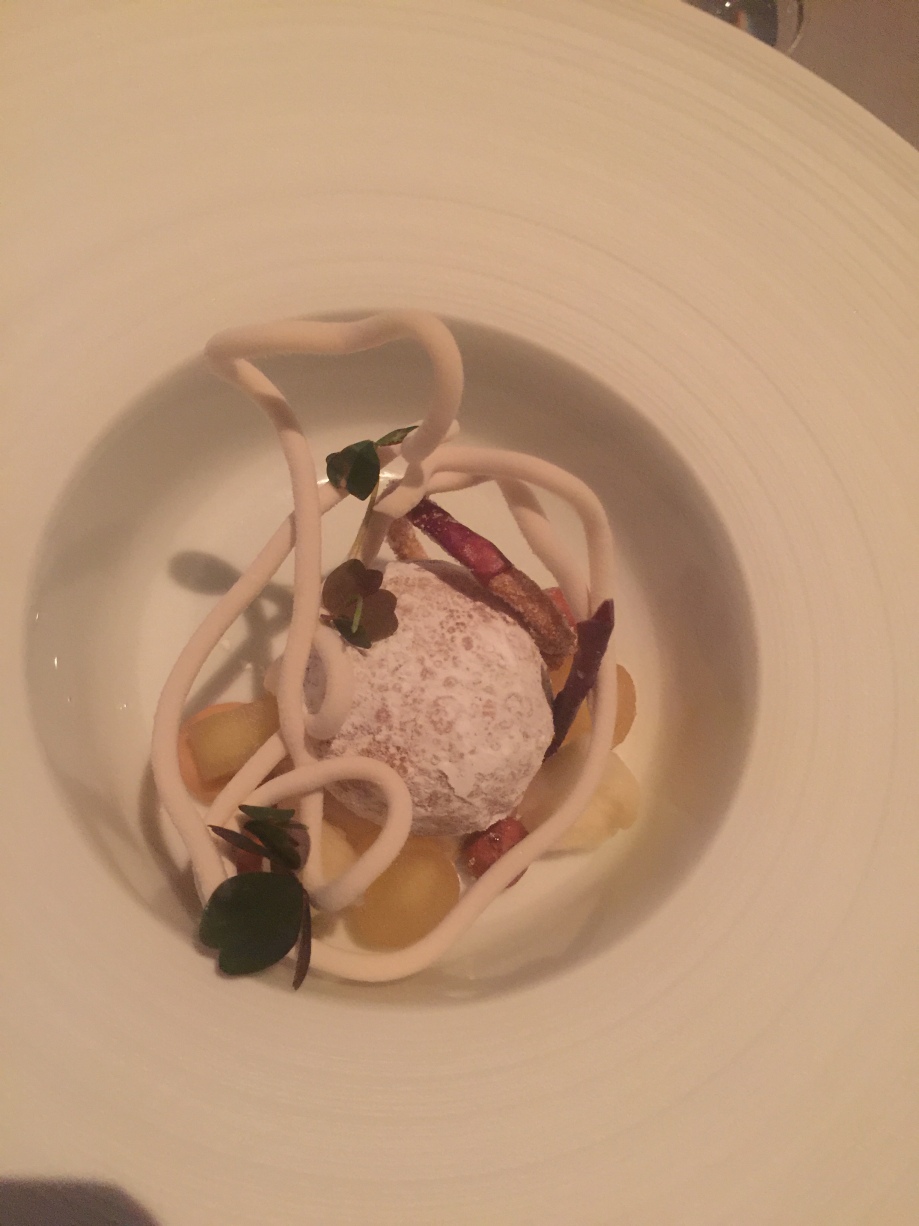 Felt like Bill Murray in Life Aquatic, all the aquarium scenes reminded us of the now defunct Red Medicine in Beverly Hills, whose chef is personal friends with Curtis Duffy. We loved the miniature garden biopsy with faux soil going on here. This looks like a savory dish but it was actually the final dessert, with chocolate at the bottom, lemon sorbet, and pickled and peeled olive to add a tangy twist to it. Chocolate truffle hiding under matcha jelly and tangerine lace. We think the matcha was also cooked into the fluffy cake bits.

Ok, here is when I start waxing poetic. This menu was so damn enigmatic. I couldn’t link the menu descriptions to the pictures half the time. But this was what we expect from a 3 Michelin star restaurant. We don’t want to see things that have been done everywhere else. Very beautiful dessert to end the night, bravo. At first glance, when I was putting the photos in order, I even forgot that this was the dessert since it looks so earthy. We love the visuo-flavor dissonance, it adds an extra angle to the overall perception of the dish. Liike abstract art, you have to dwell on how it makes you feel uncomfortable at first when you can’t exactly identify it, or pin it down to a preconceived notion you have about something that doesn’t neatly fit into a psychic skema. 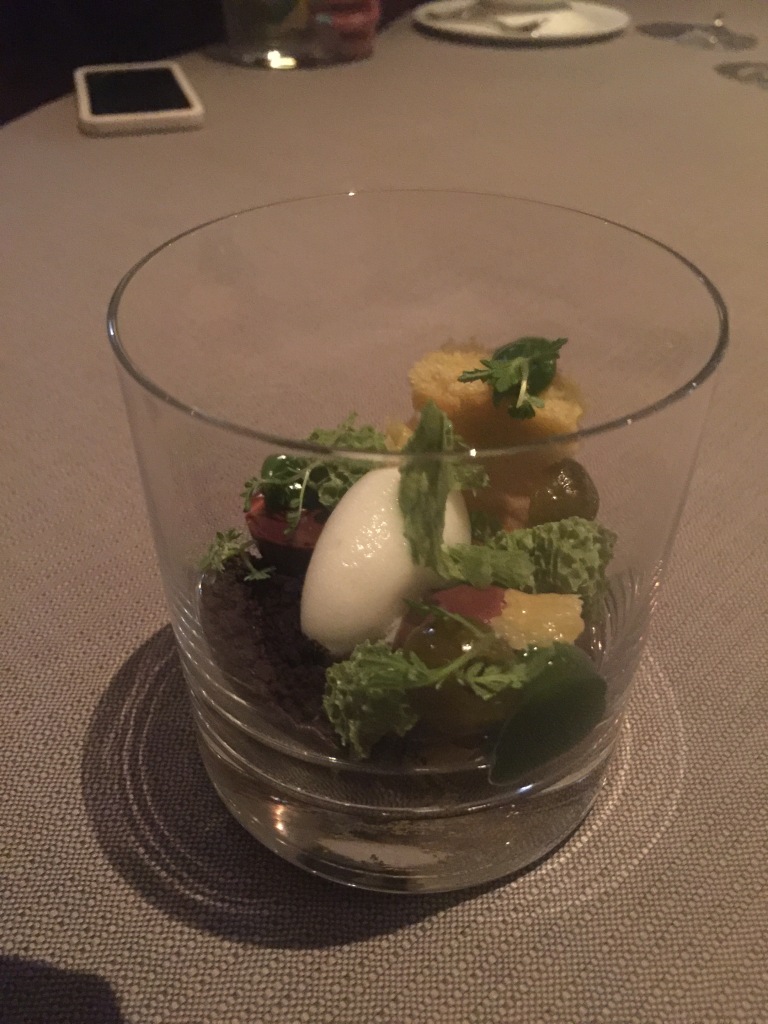 They had a formidable selection of carefully selected scotch as well.

Good to the last drop. We have never left a restaurant with two bottles of alcohol gifted to us. Great, great, left such a good taste in our mouth, both metaphorically and literally. Could not have been happier with everything overall. The personalization, on top of the amazing flavors, creativity, stunning visuals, and multiple sensory integration, with highly cerebral concepts, made for a tour de force dining experience. They were firing on all cylinders. This was the most ‘whole’ 3 star Michelin meal we’ve had in recent memory. Up there with Benu, but service at Benu did not compare to this place. Do not miss this if you are in Chicago, it lives up to the hype.