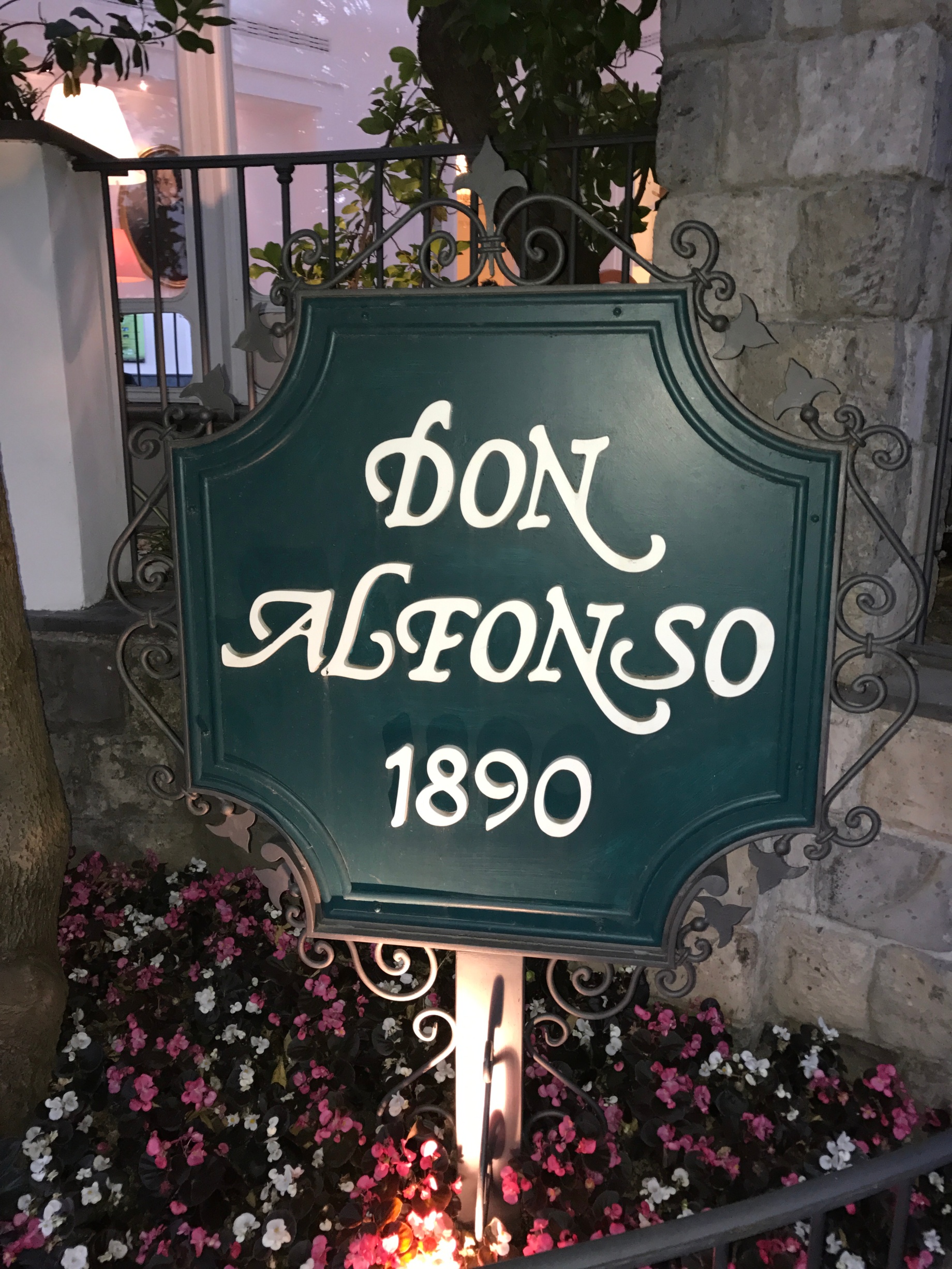 This place was seriously like a museum, but at the same time as if you were having dinner at someone’s home with a Jumanji basement that felt like you were entering another land, like walking into the Goonies scene where they discover the pirate ship.

If I am not mistaken, this was a bottle they found deep in this cellar when they acquired the restaurant, and they had no idea what wine it was as the label had deteriorated beyond recognition, but they dated it back to 1890. At some point, they opened it and drank it, so here is the empty bottle, or so Maurizio says. 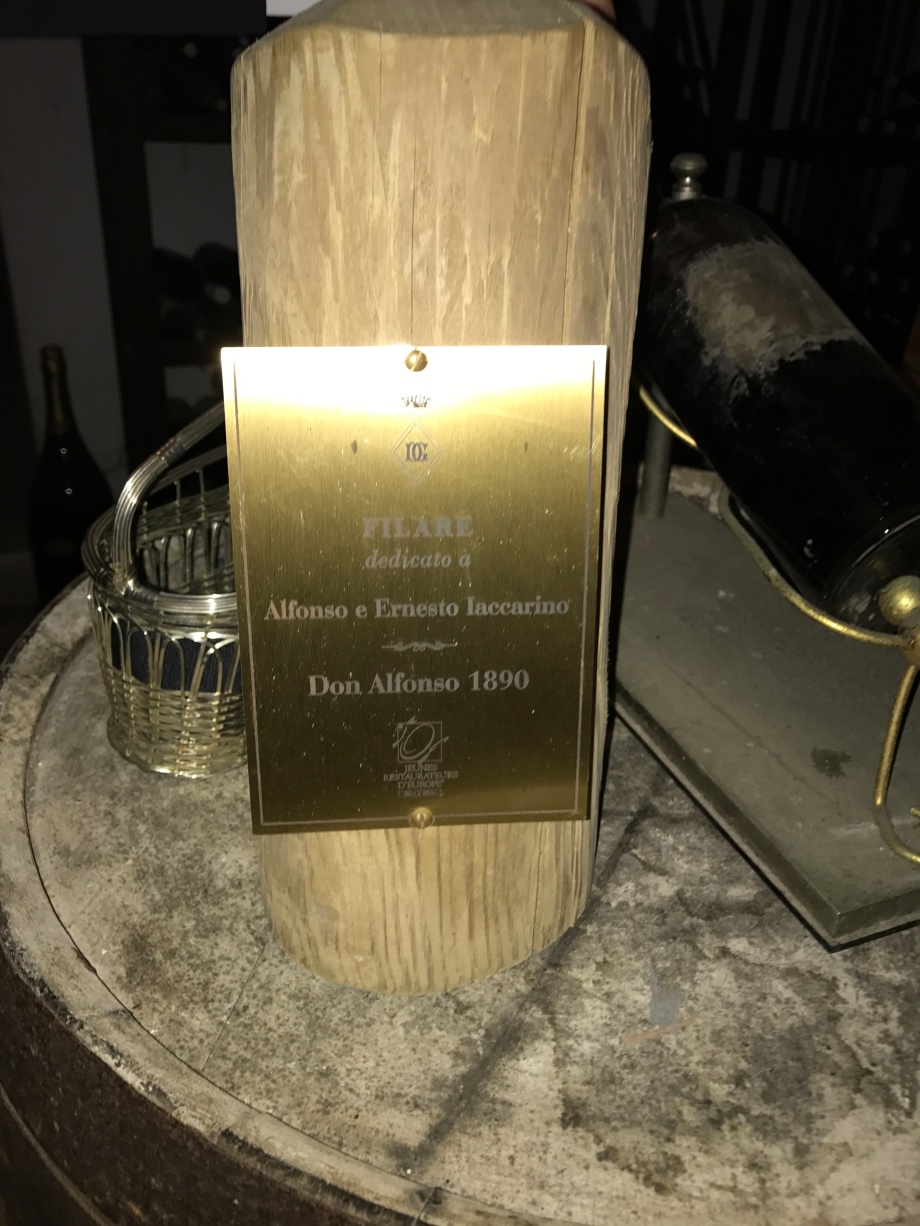 Pretty lax security for a cellar of this caliber if you ask me. Opens straight to the outside of the hotel. You can see where my mind was heading already.

These bottles are easily $4500-$6500 each for retail. I can imagine what they sold for in-house with the markup. 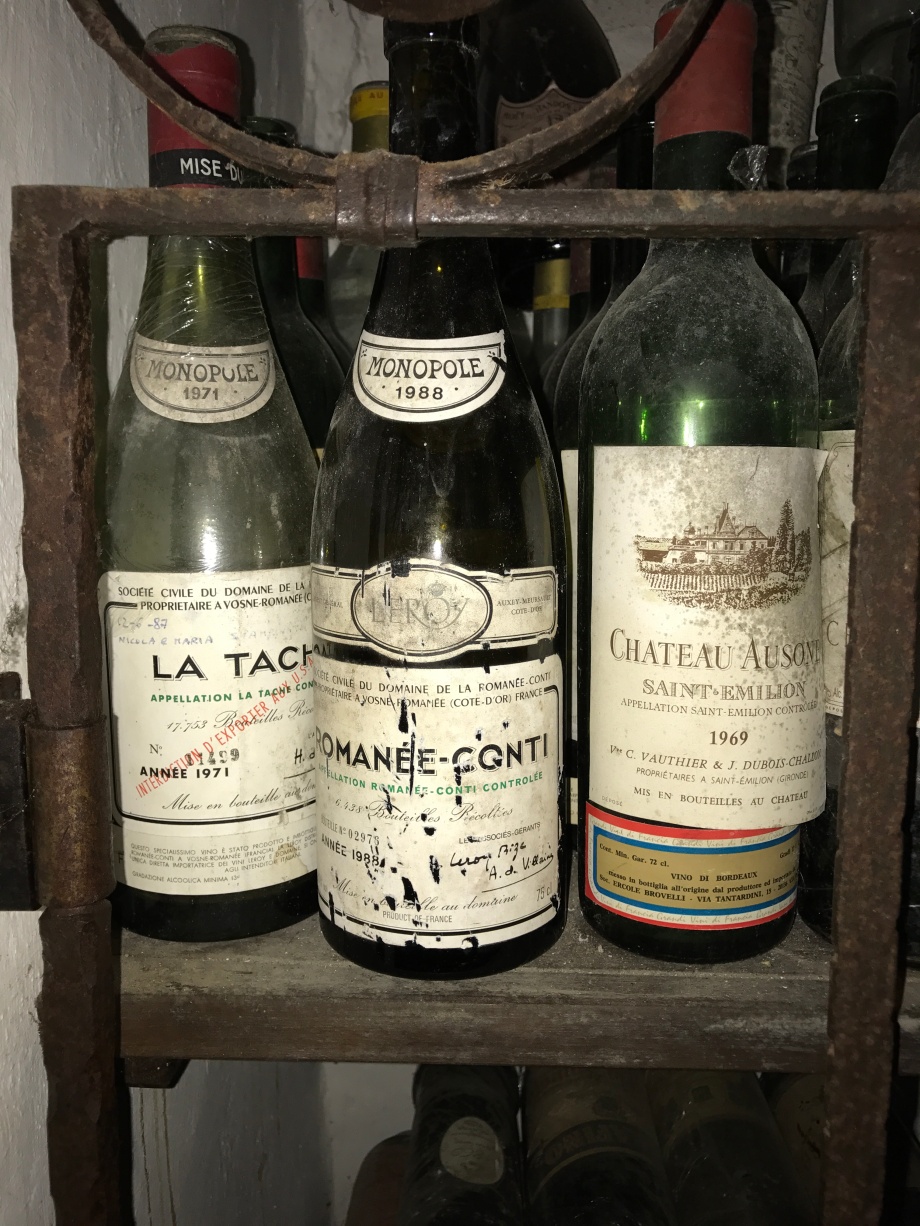 Look at all this old Gaja. Stacked for days. Unbelievable. Each of these bottles is no less than $1000.00 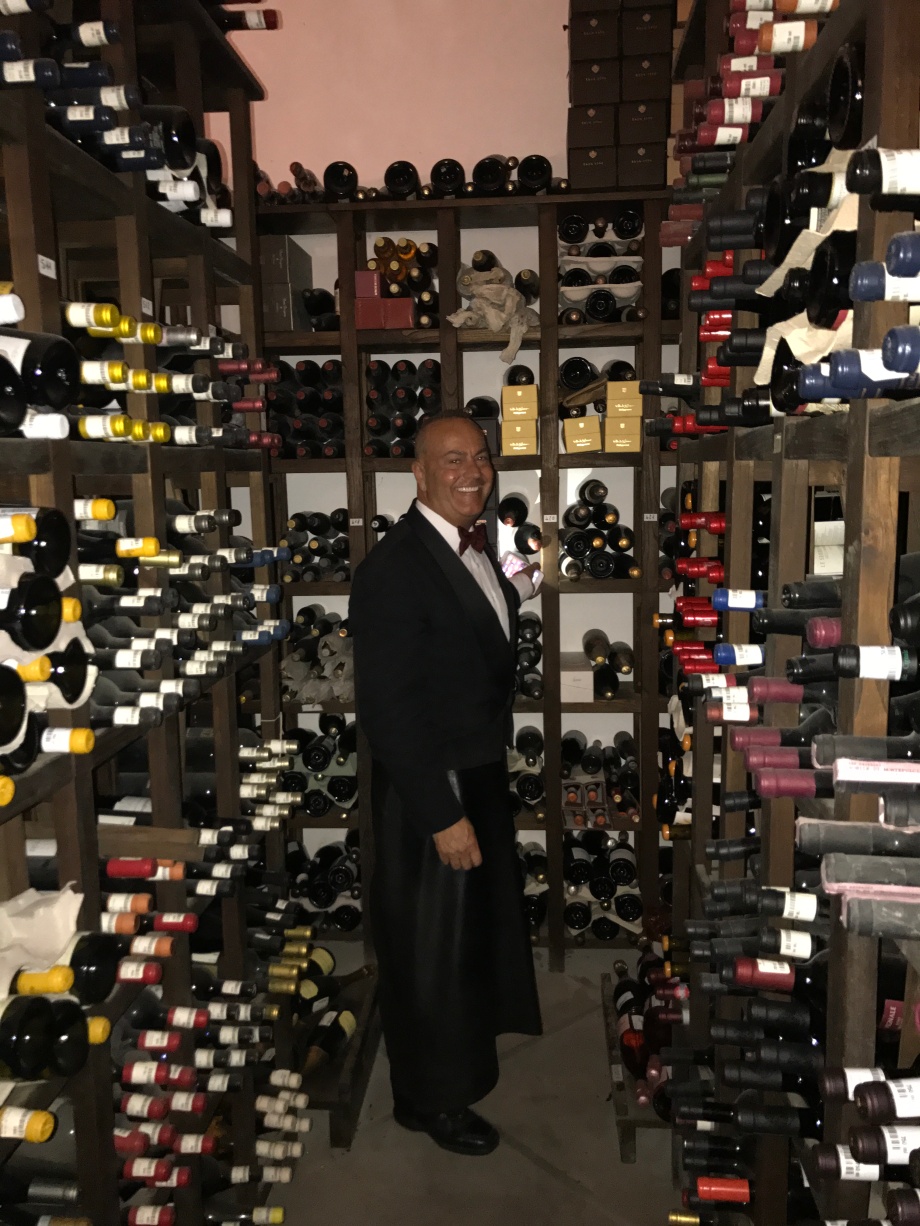 This lucky bastard gets to taste every single bottle. Wow, Maurizio, the som. You are one lucky fuck! 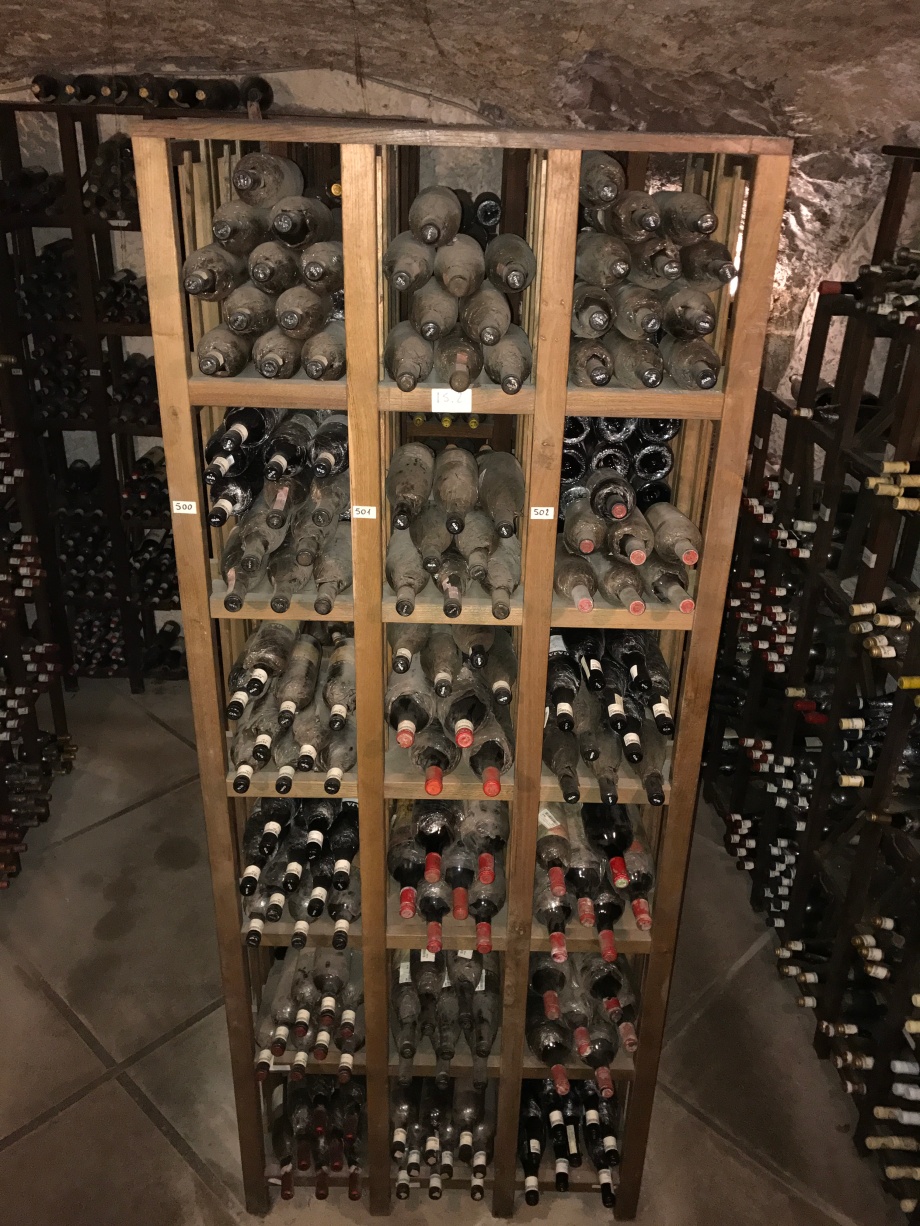 You can’t take two step without tripping over some ancient, priceless gem. Stacked deep with no end in sight.

Child-like giddiness came over me as I saw the staircase. More?!

As I look up I realize there is no turning back. 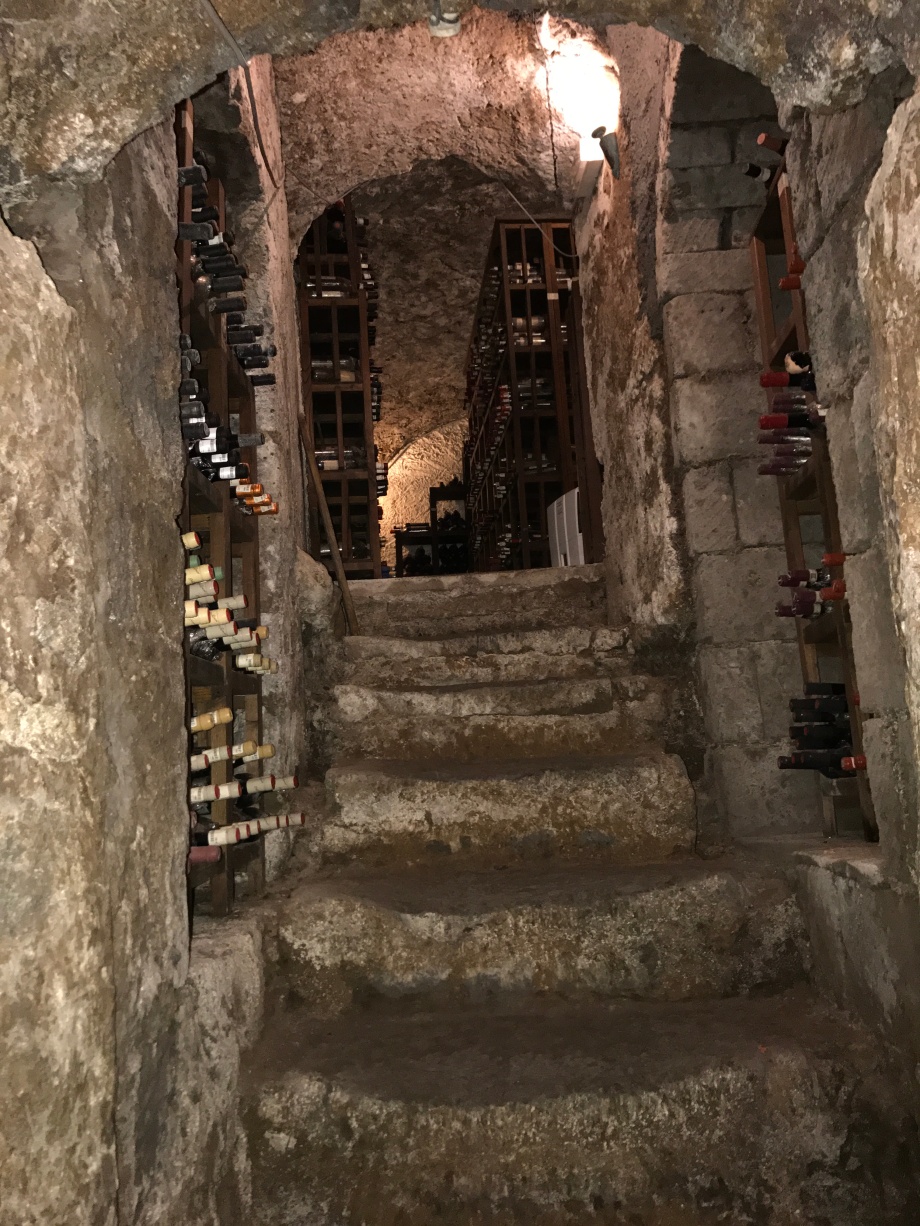 If, God forbid, there is a mudslide or earthquake, I pray that I can find a bottle opener somewhere down here. At least I would die happy.

Only the penitent man shall pass….

Talk about religious experience. We were walking in the footsteps of Etruscans that built this cave in 600BC. It leads all the way down to the ocean.

Apparently, they found this artwork here on an archeological dig. 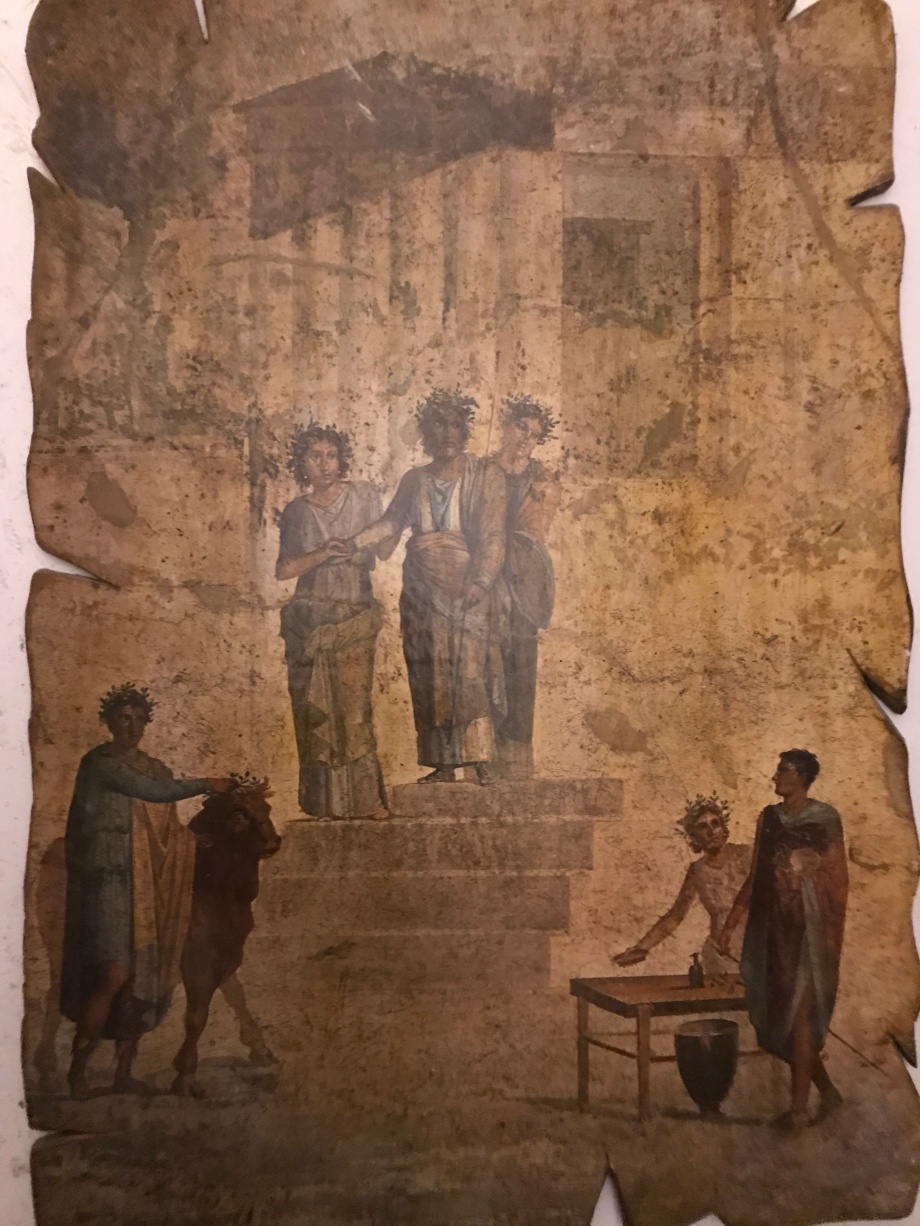 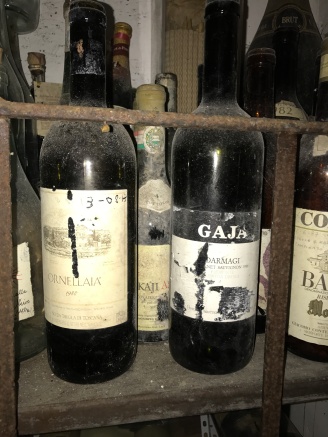 Endless. I read some article about this place in Forbes saying, “I challenge you to show me a more mystical wine cave.” They were not exaggerating, bust out your toga and let’s make an animal sacrifice. 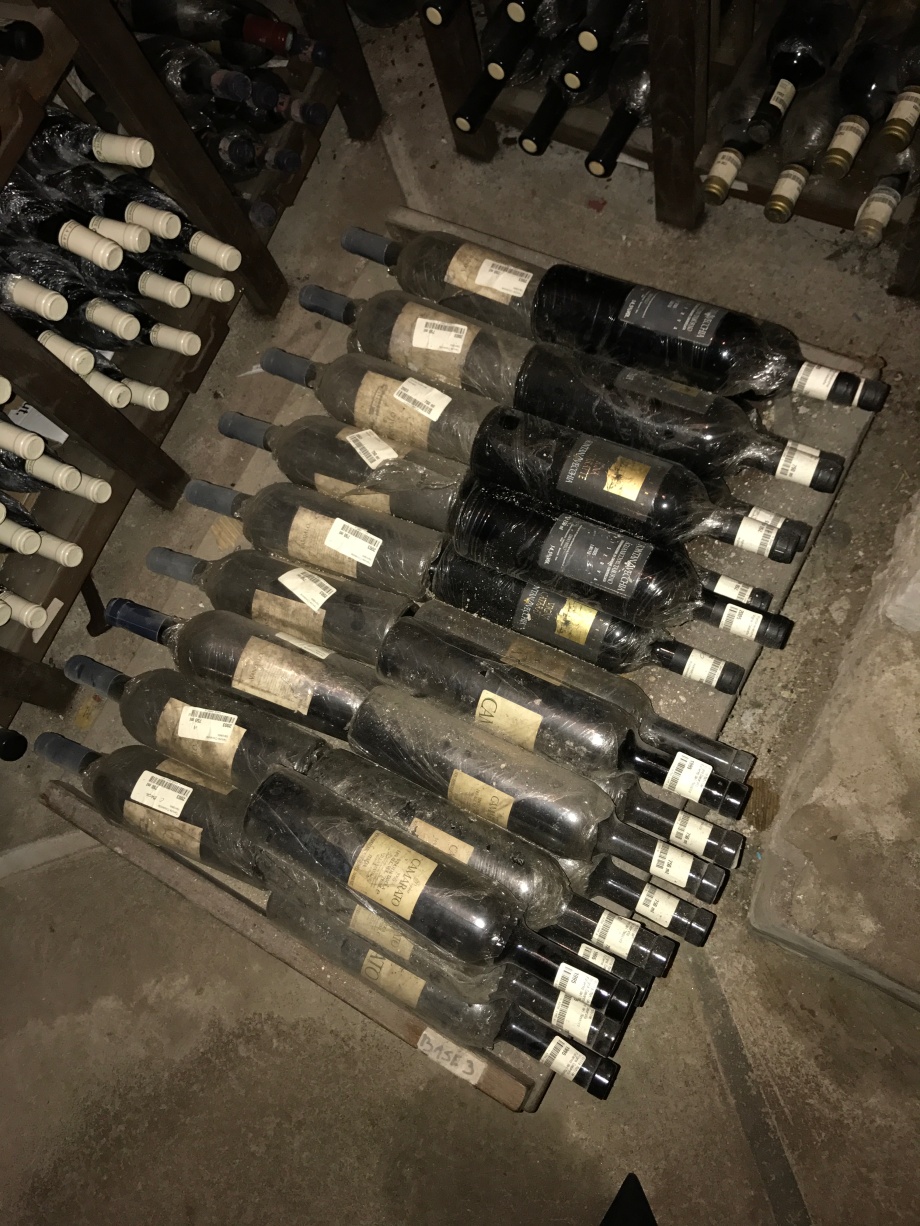 It just kept getting more and more freaky. 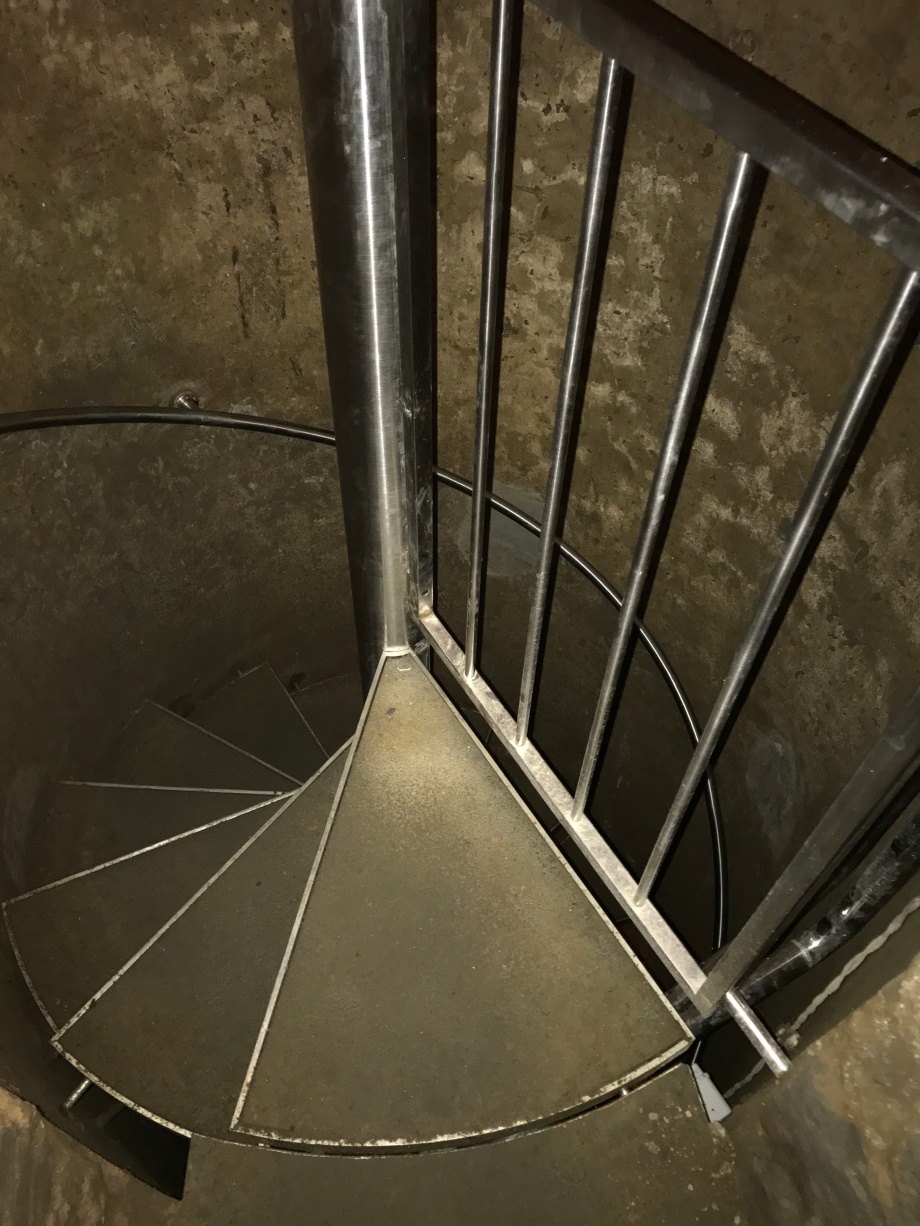 And deeper…I don’t know why the hell I did not go all the way down, but I was told that they store their cheeses down here and that it supposedly goes all the way down into the ocean. I started getting shortness of breath and didn’t want to get stuck down here so I just started having a panic attack and ran all the way up the stairs, it was fucking hilarious. 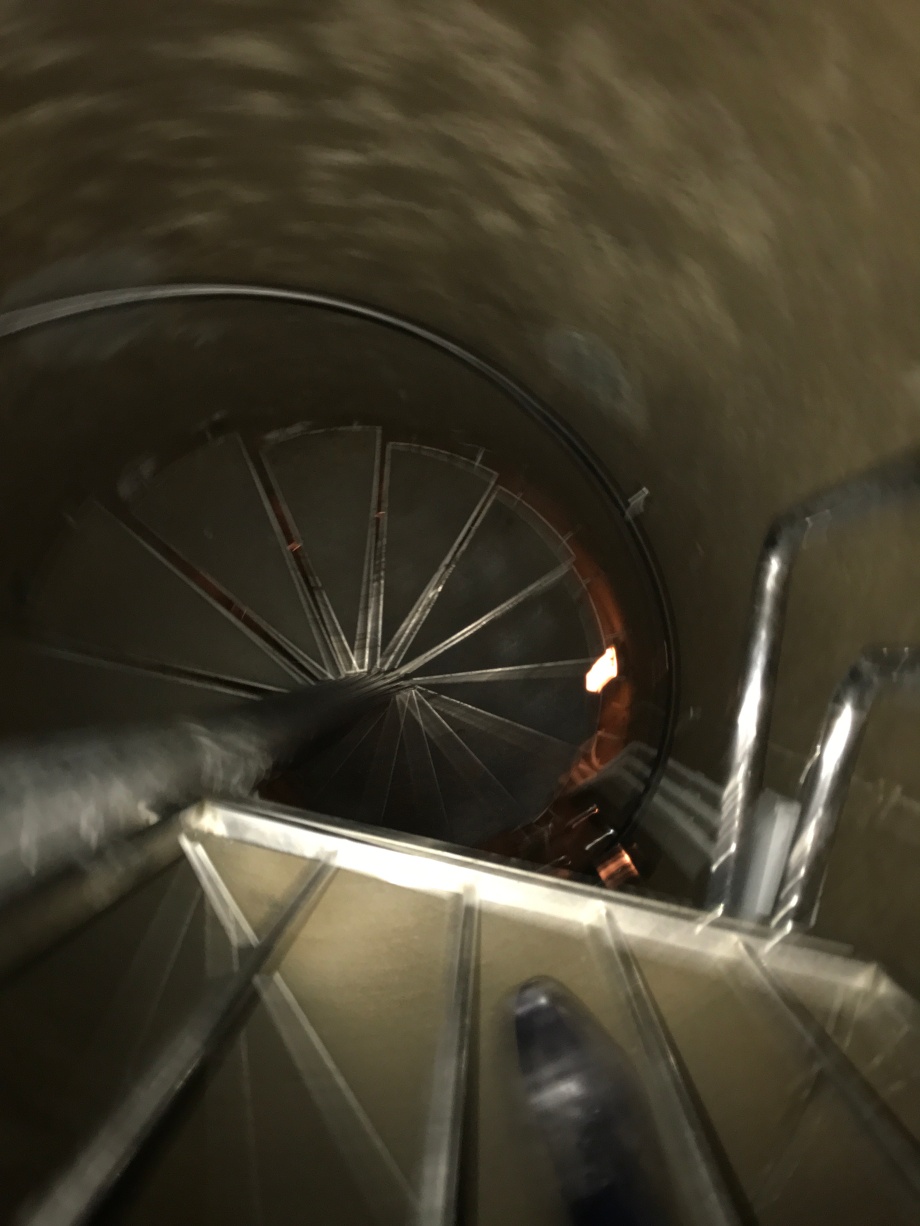 As we ascend from the Tolkien-like underworld and resurface to reality, we see an inviting living room scene, where you can hang out in if you are staying at the hotel.

This leads to the patio. It would have been nice to have the time to smoke a Cuban cigar out here.

And now the restaurant…

Wow, I must say, the internet photos don’t do this place justice. So much so, that I thought the rooms were too gaudy and we did not end up actually staying here. I thought it was a mish-mash of bright colors that overwhelmed, but actually, the over-riding theme was bright white-wash with splashes of color throughout the house. Impeccably decorated and designed.

The beautiful tiles everywhere reminded me of Lisbon. 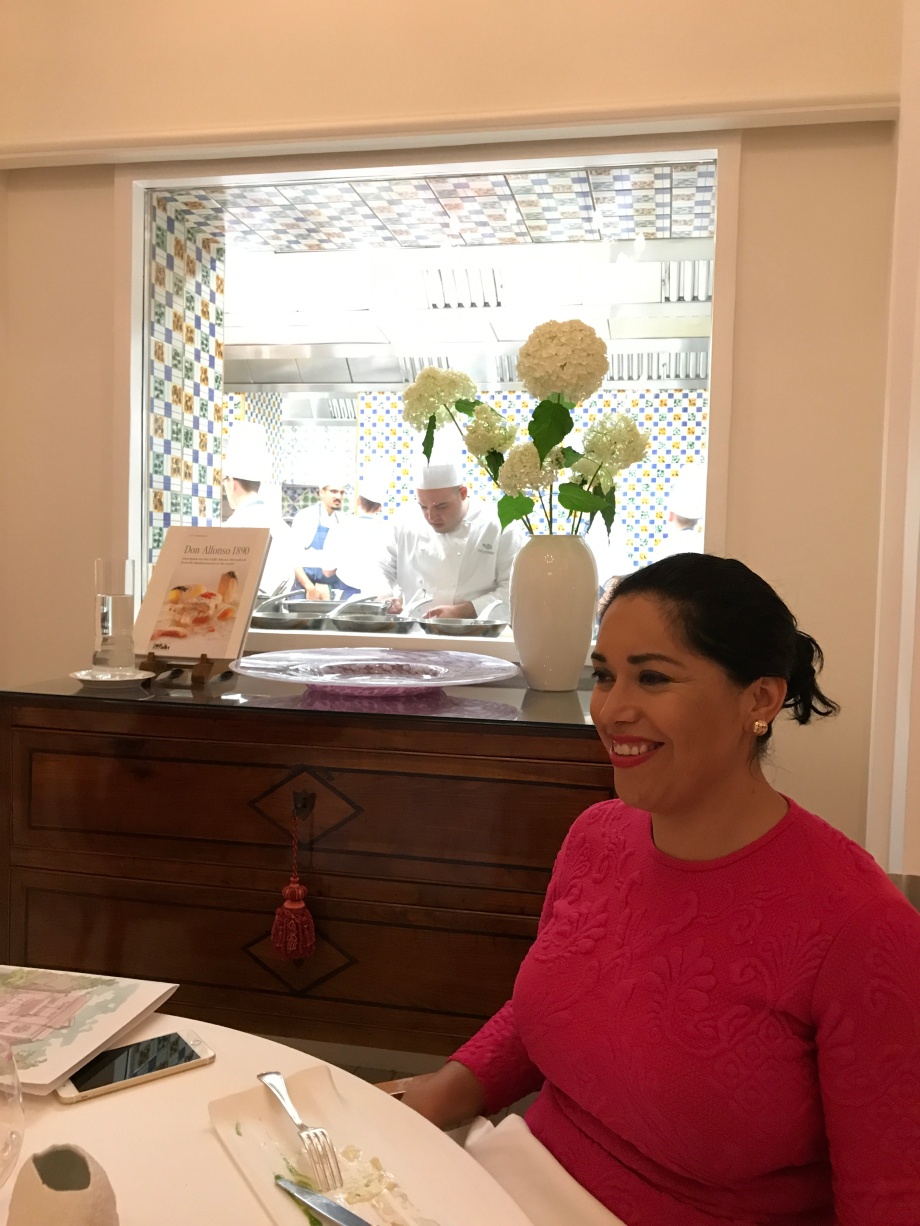 The pink/fuschia theme was very nicely done. Besides obviously Erika, subtle accent pieces remind you of this theme.

I loved the white-on-white theme of the room, look at the beautiful angle of the tiles that were laid on the floor. Architectural and design eye-candy satisfies even before you take your first bite of food. 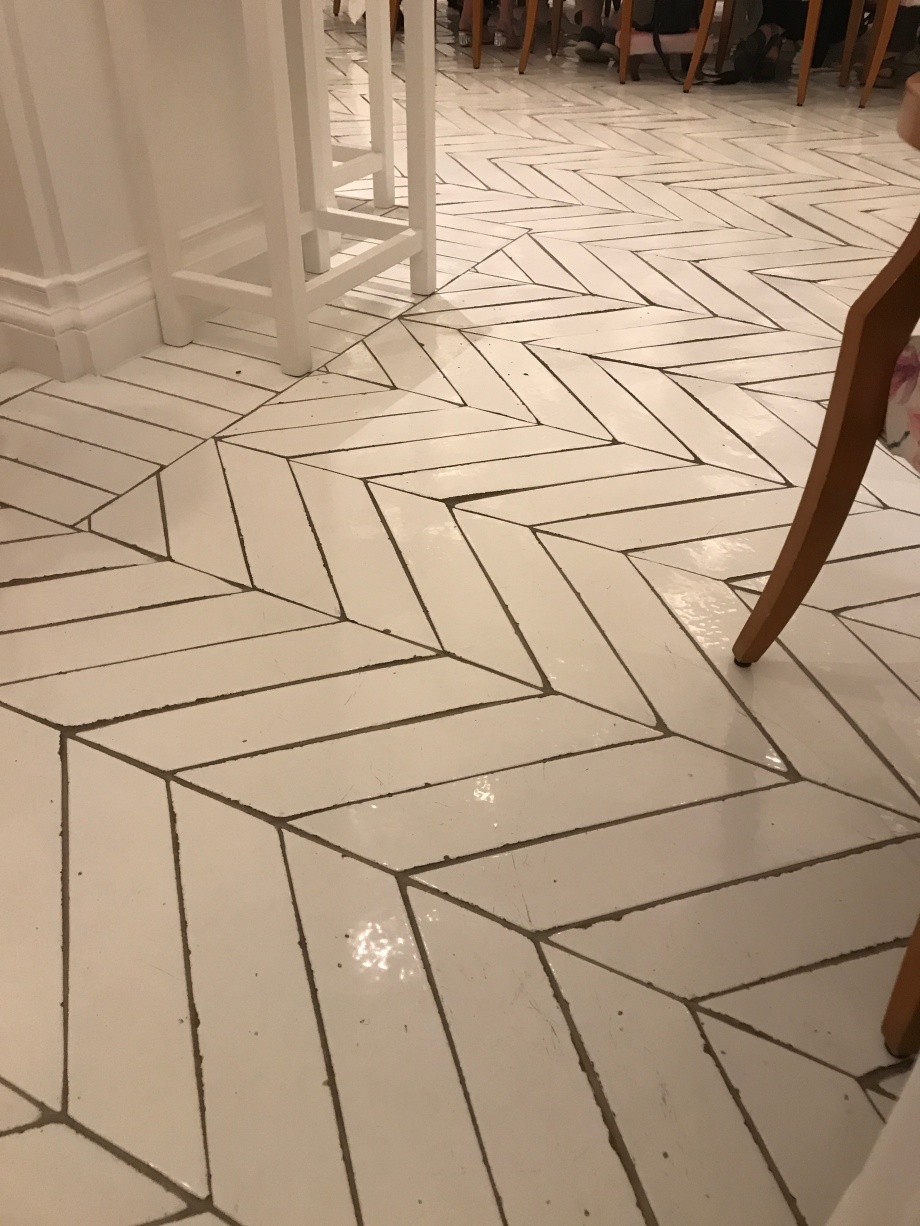 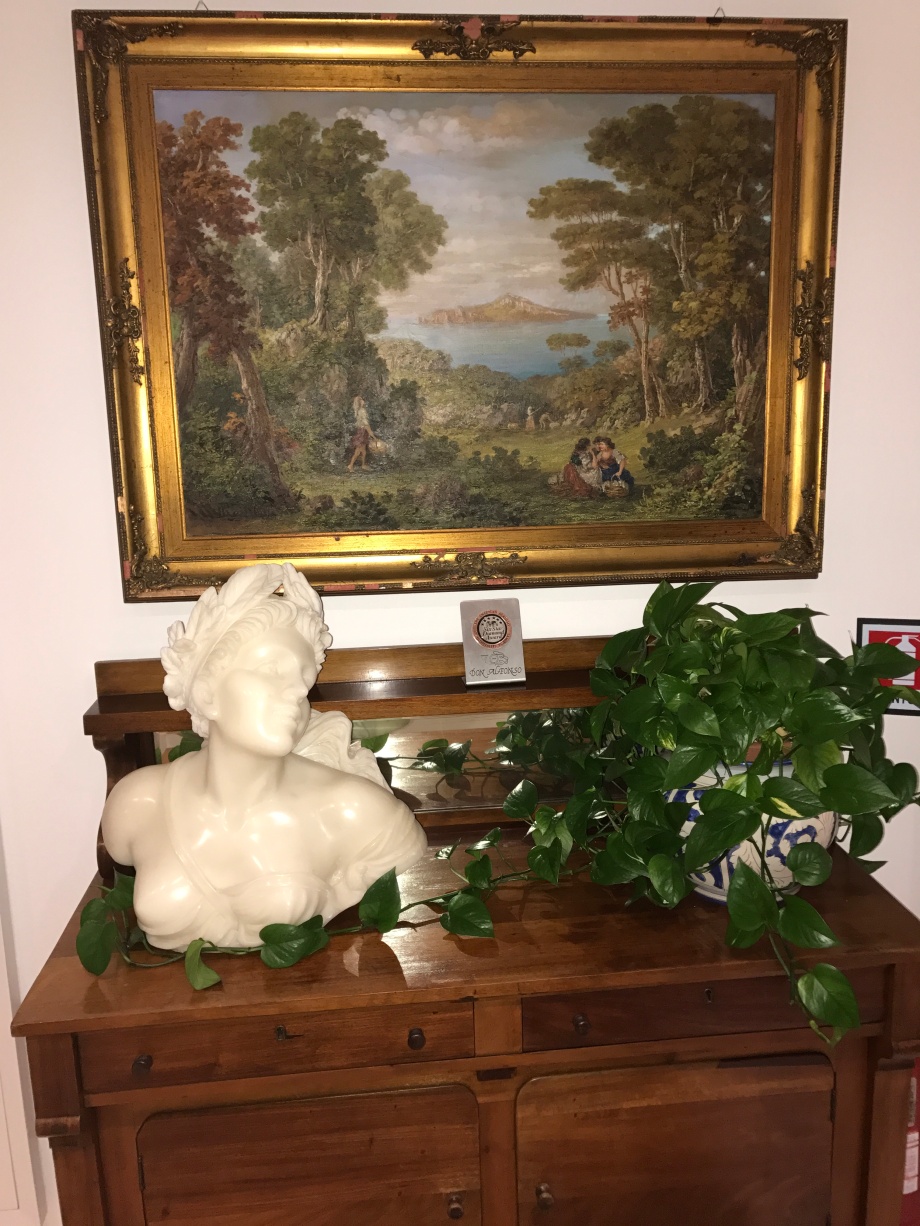 I literally could not make it two feet before something in the hallway, on the way to the bathroom, caught my eye. Such attention to detail. Little nic-nacks everywhere.

Here was the first dish, fried zucchini flower stuffed with ricotta cheese. Reminded me of a Japanese dish we like of tempura shiso leaf wrapped around spicy tuna. This is like the real version of the fried zucchini cheese stick that you see in junk food restaurants across the US. 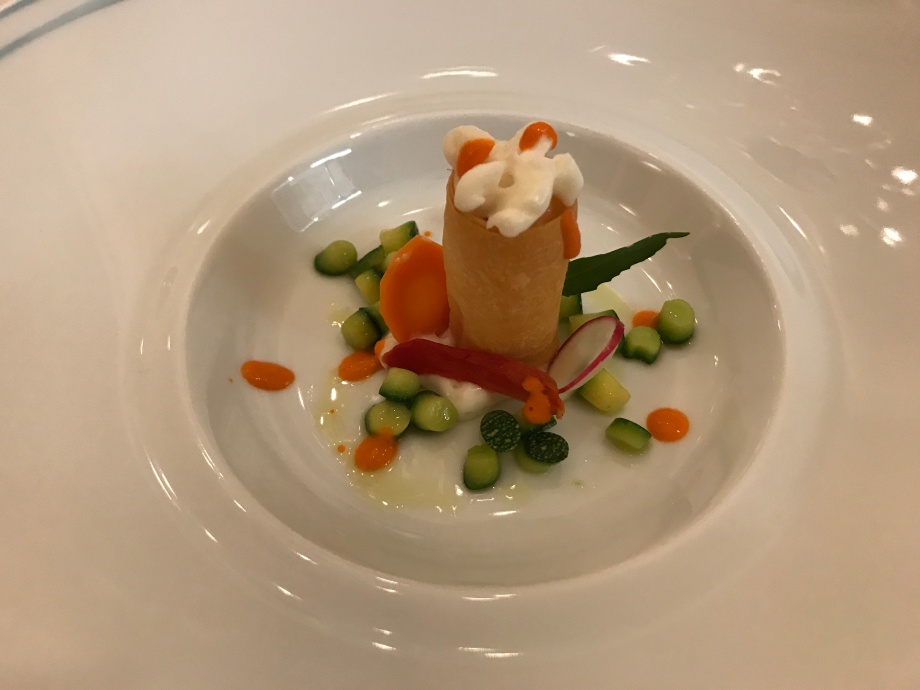 Then a classic cannoli, but with shrimp and lobster. These first two courses paired nicely with a 2013 Romania Chardonnay which had a very fruity nose, smooth glycerine mouthfeel, then buttery formaldehyde tinged aftertaste. For some reason, I could not find photos of the wine bottles we drank. We also got a bottle of 1997 Chianti Reserva which was very dusty, with graphite pencil shaving notes, and an intense incence-like smell. 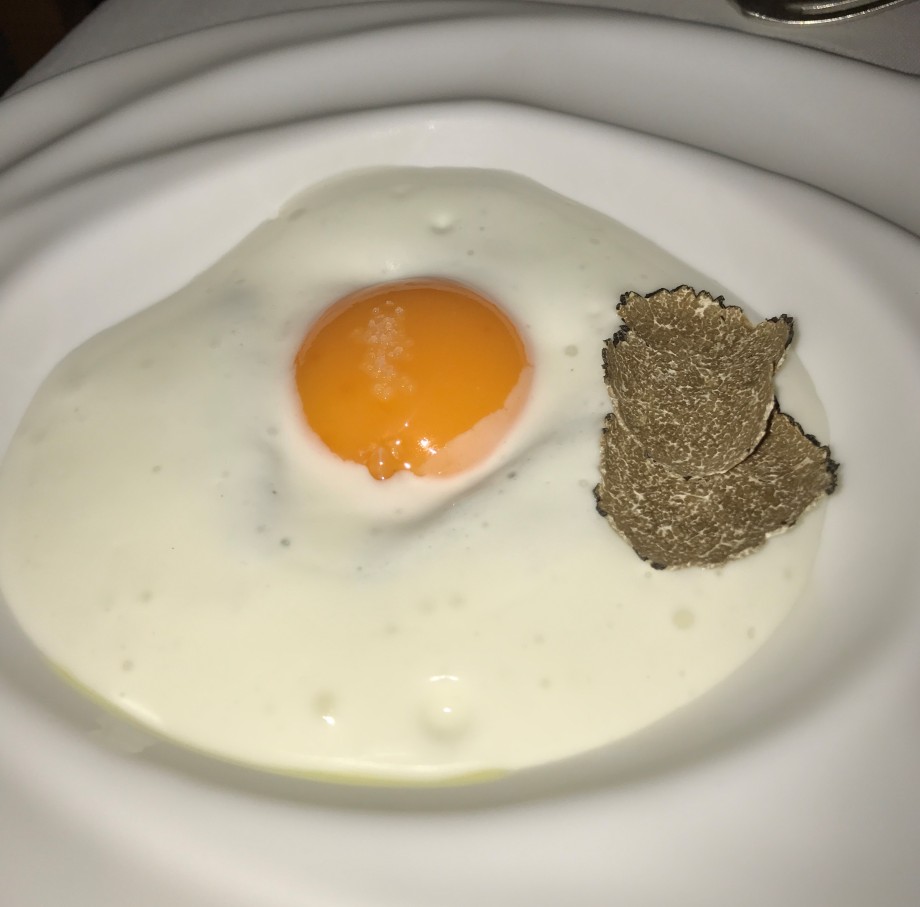 One of my favorite combos, truffles, and farm-egg, from their farm. The egg white was cooked with yogurt, which gave it some added creaminess and gaminess. The yolk was slow cooked separately at 80 degrees and then transplanted back into the center. 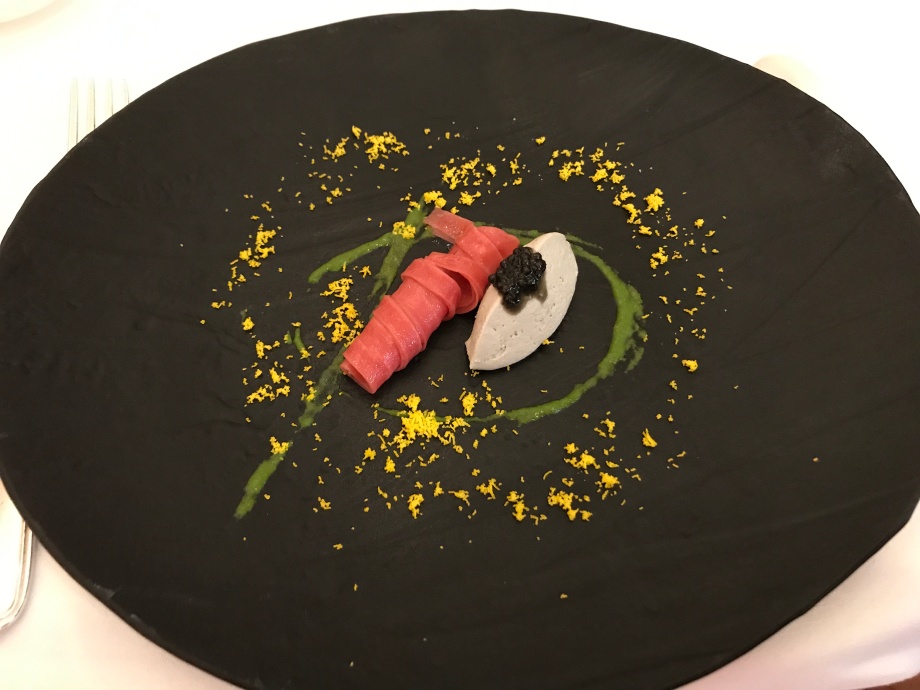 This was so good, I wanted more of this pasta, but I knew that I had to pace myself. It was tagliatelle with rose infusion, then eel ice cream with osetra caviar. I loved the exotic and bizarre combinations. Anything with caviar just always does it for me. I am a slave to the concept of caviar, sorry, can’t help being bougie, it just adds so much umami and makes me salivate even more psychological or not.  The salinity of both the eel flavor with the osetra were a very nice stark contrast to the sweetness of the ice cream and rose infused pasta. 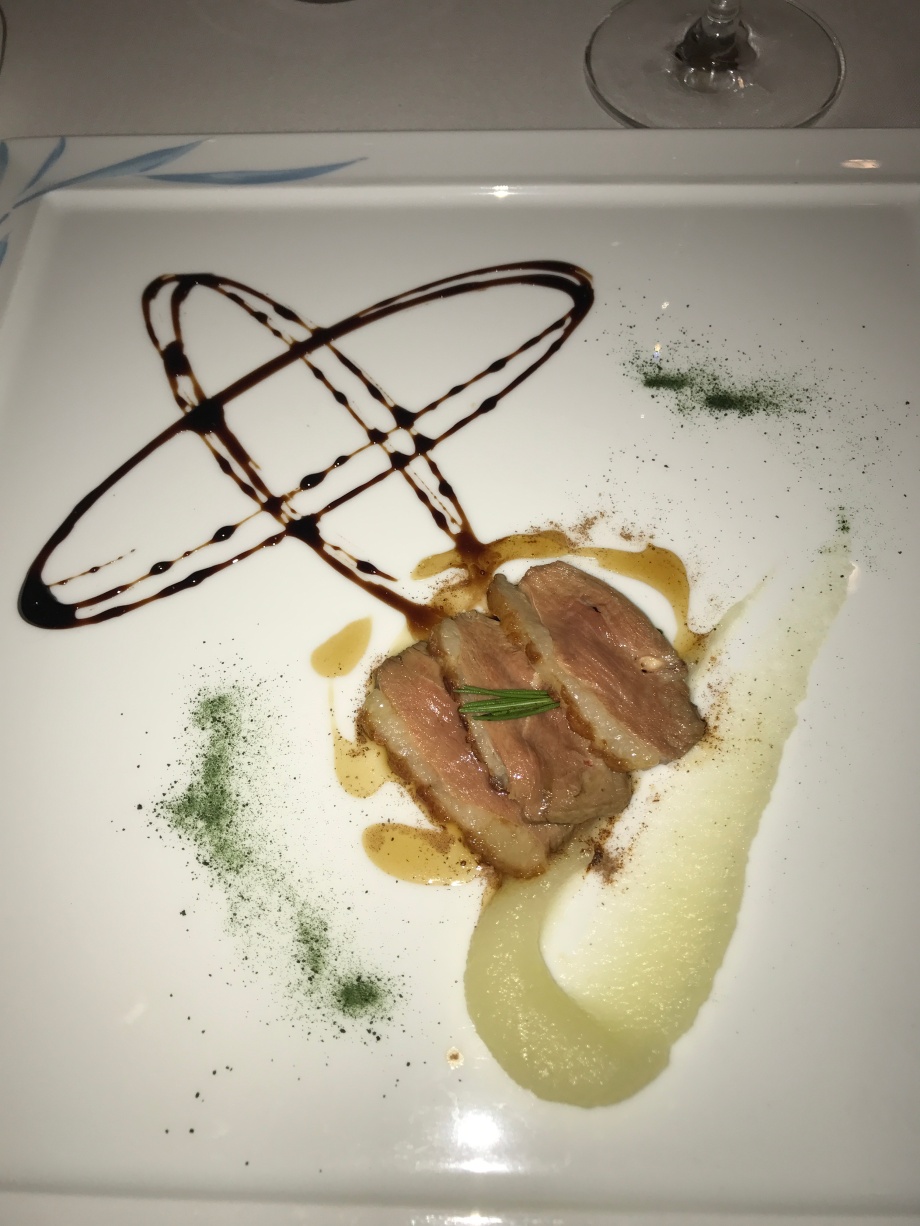 I loved how rare this duck was served, look at that fat, it looks like this duck had a very varied diet with lots of vegetation, nuts, etc. The caramelization, wow. Duck confit breast with apple paste and balsamic reduction. Nothing out of this world as far as pairings and plating, but all the flavors were classic and this dish killed it. So far I was not let down. 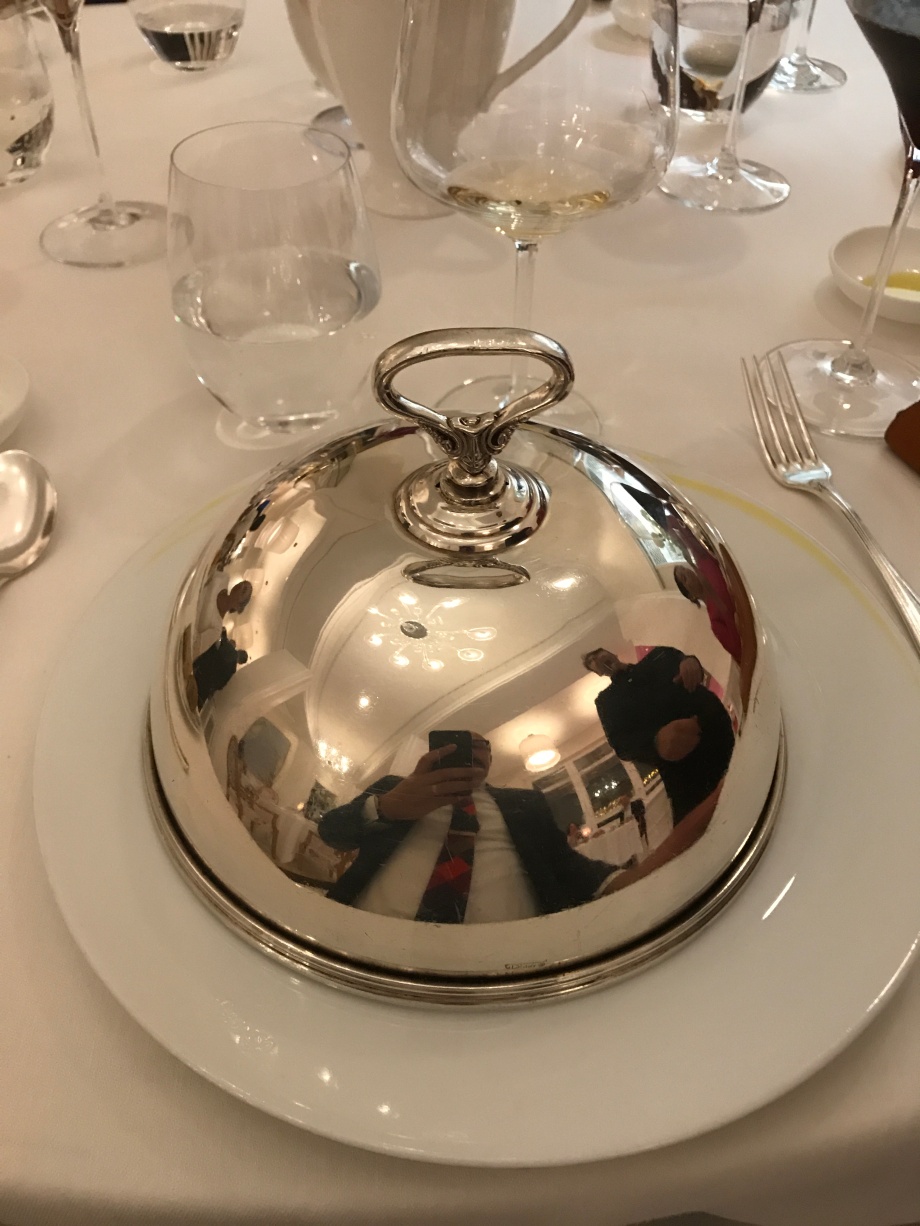 This was special, reminded me of the Fagotelli at La Pergola. Liquid explosion inside the pasta dumpling, but this time it was goat cheese.

Pumpkin gnocchi, liquid goat cheese, sage, ginger chips, honey. It was very complex in the flavor profile. Sometimes sweet, sometimes salty depending on the sequence you chewed it in. 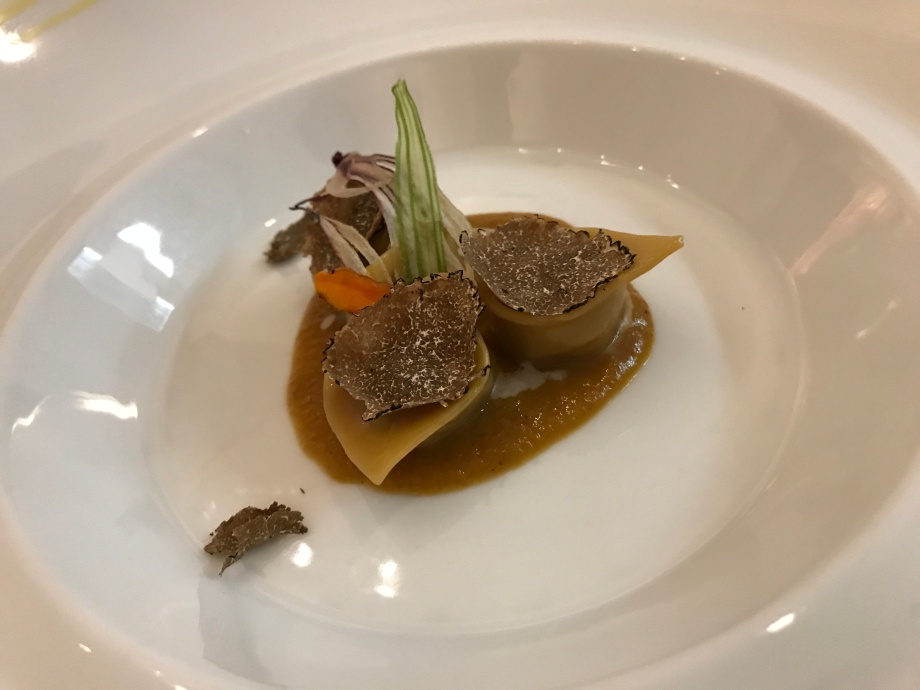 They kept killing me with the savory filled pasta. I was riding an umami wave, wondering when it was going to crash. This was Capelli pasta filled with veal Genoese style. This truffle is a variety called Bianchetto, it’s a blend of black and white. It’s sitting on a Grana Padano veloute. Grana Padano is the cheaper knock-off version of Parmesan cheese used in grated cheese for pasta all over the world, but this was the real stuff, not Kraft.

This is where they lost me. I was already getting full and this was just way too heavy. I know I have to respect the local culture and eating cod, blah, blah, just felt that it was a kind of cop-out of not having to spend more on higher-end ingredients, and it was breaded and fried, with a sweet and sour lemon and buffalo yogurt and puntarella. I appreciated the buffalo yogurt, but it was like a glorified filet-o-fish to me. 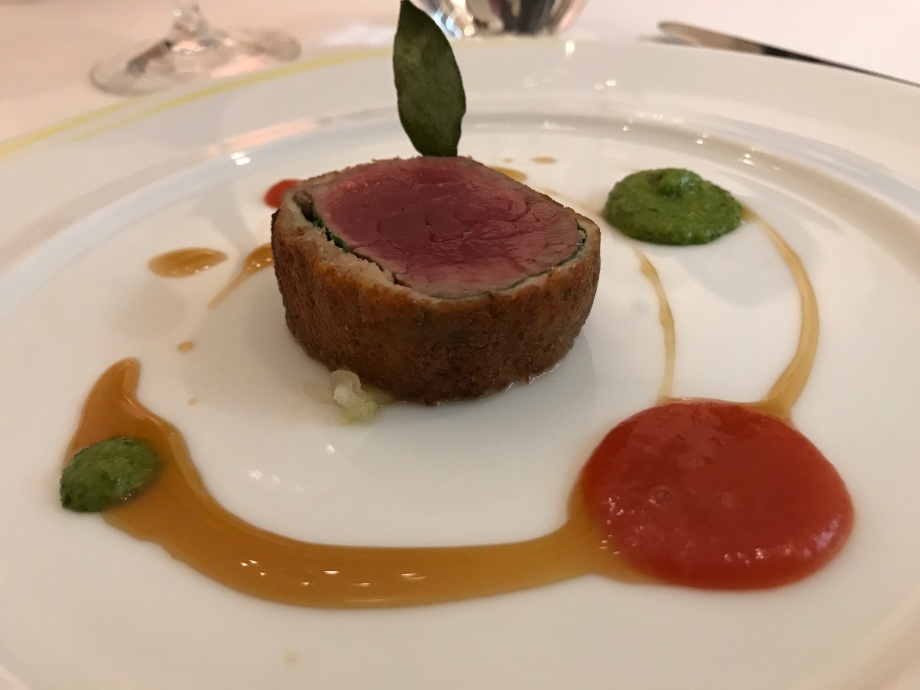 Again, I was not happy to see something breaded after that GERD bomb of a fish. But, the meat itself was not bad, tenderloin from the Benevento mountainous region of Campania. It was paired with an amazing reduction of tomato with buffalo mozzarella underneath, with spinach puree and pork cheek reduction. If I was not so stuffed at this point, maybe I’d have raver reviews.

Again, I think this was the Agerolese cow from which the Provolone del Monaco comes from.

Pre-dessert was a welcome sight. Lemon sorbet from their farm. You can’t get more Amalfi than fresh lemons. 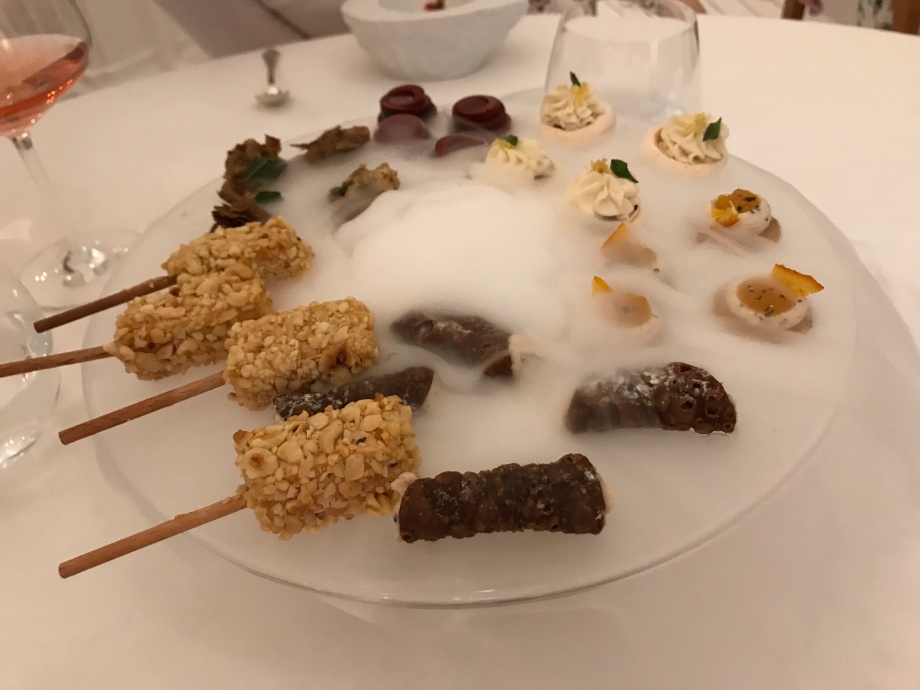 Merengues and chocolate for a simulated Mt. Vesuvius eruption.

I could not get enough of the candied orange marmalade in Italy, so bitter and sweet at the same time. Usually paired with some sort of burrata  or ricotta in a cannoli. Retrospectively I wish I had more burrata and ricotta on this trip. I’m talking about going to a farm and buying a brick of cheese and just sitting somehwere and stuffing my face with a glass of barnyard biodynamic orange wine or some funky Italian craft beer. We actually did do this at some of the wineries, enotecas, and on our boating tour through the famous arches of the Amalfi coast, as well as going into the Blue Lagoon which will go down in infamy due to destroying the boat and falling over board from drunken debacuchery. I will at least talk about the winery and enoteca in my Sicily posts. The other disclosure will remain confidential.

Again, the iconic lemon of Amalfi. Done up in every way imagineable. Deep fried lemon curd, lemon skin candied and a frozen lemon cream inside it’s own shell. Omg, so refreshing.

Final belly buster, but thankfully very light and refreshing with nicely contrasting elements. Mediterranean biscuit with black licorice reduction, pistachoes with pistachio ice cream made with buffalo milk, and oranges from their farm. Like the sophisticated version of an orange creamsicle that reminds you of summer and the beach.

Here is Don Alfonso himself. He loved my Mexican moustache. 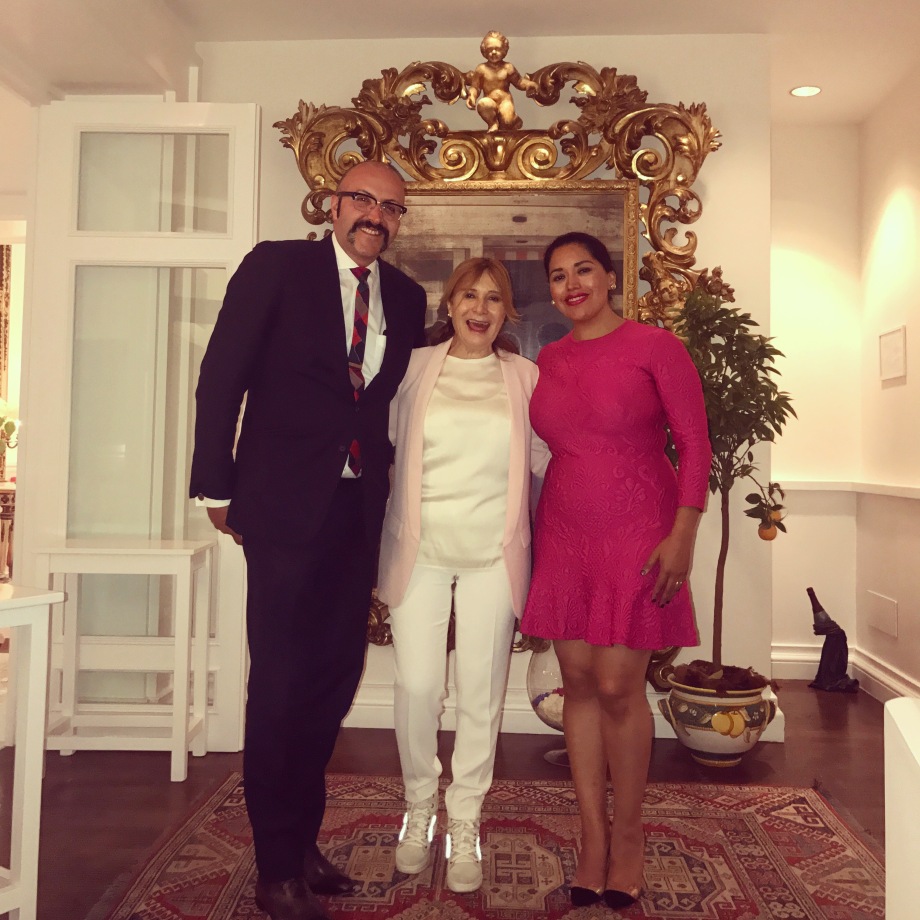 And La Dona Livia. She was such a sweet lady. So welcoming, happy and friendly. She absolutely loved Erika’s dress.

Look at this masterpiece. She could not have been dressed any more appropriately. Thank you Stella McCartney.

I made sure my Marc Jacobs tie matched her dress.

Here is their test kitchen after dinner ended. Again, such tasteful arrangements of color. You will see more about the Moorish heads you see in the cabinet as we approach Sicily. 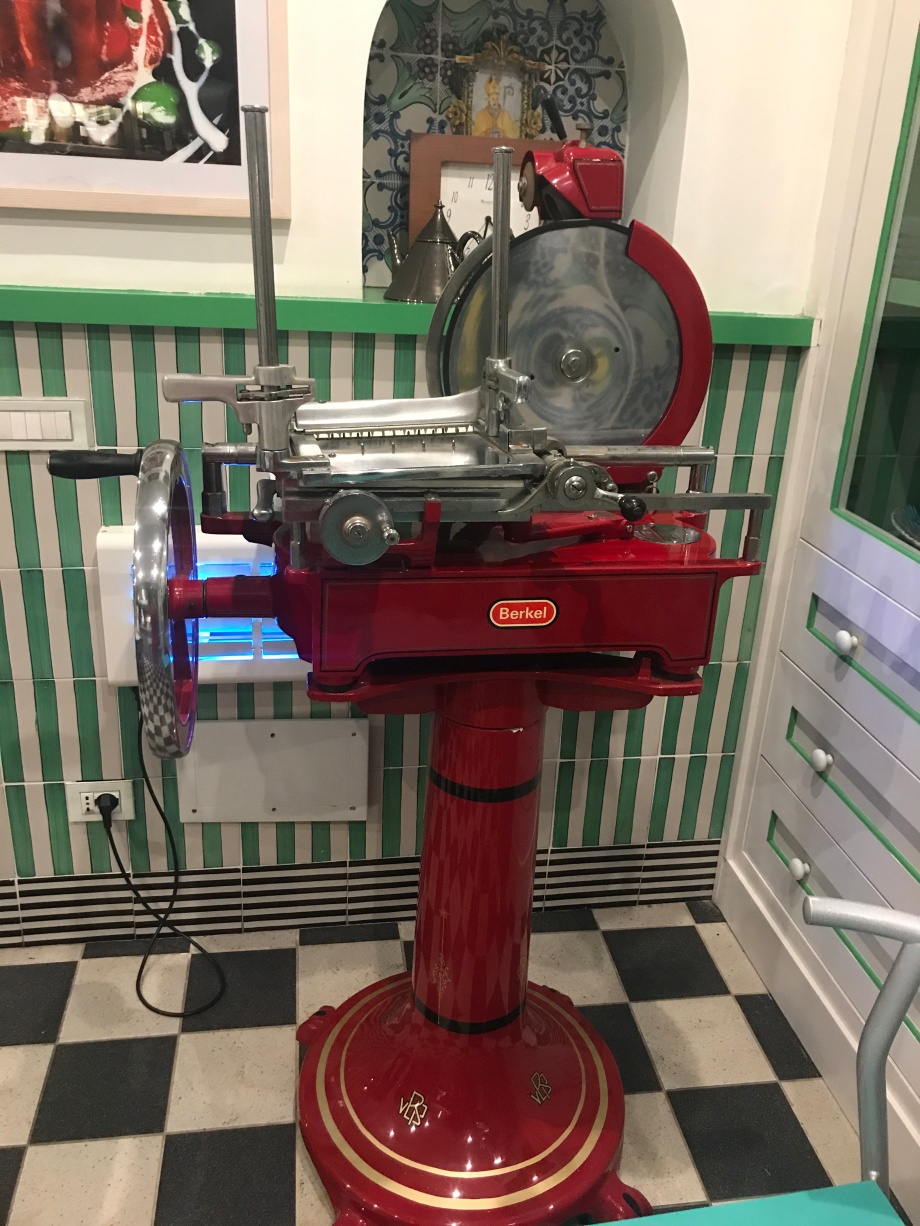 Satisfied all five of our senses. We highly recommend checking this place out, despite some inconsistencies in service, and two dishes I did not care for, the visual spectacle, the really good dishes, and the wine list with wine cave tour more than make up for any shortcomings.