Thanks to Julia from Moet and Hennesey we were able to book a last minute tour of the Champagne House as well as the Cave with a tasting at the end. Several of the tastings were good older vintages, the other 2 were their flagship non-vintage rose and blanc de blanc.

It’s really difficult to get any visit to a chateau in Reims unless you know a wholesale distributor who can make reservations on your behalf. We were able to get in contact with Julia thanks to a hook up from our good friend Marc Zeidler, whose family own Capo in Santa Monica. We tried but were also unsuccessful in getting into Dom Perignon, Laurent Perrier, Roderer, Tatinger, Billecart-Salmon, and Salon. I even booked a night at L’assiette Champenoise as a way to get an inside track from the hotel concierge, but even that did not work as the tours are usually booked out 6 months in advance.

We drove in from Lake Annecy and were very tempted to stop in wine country, but we were on a tight schedule and had to make it to the tour at 130p.

Here is the tasting room. 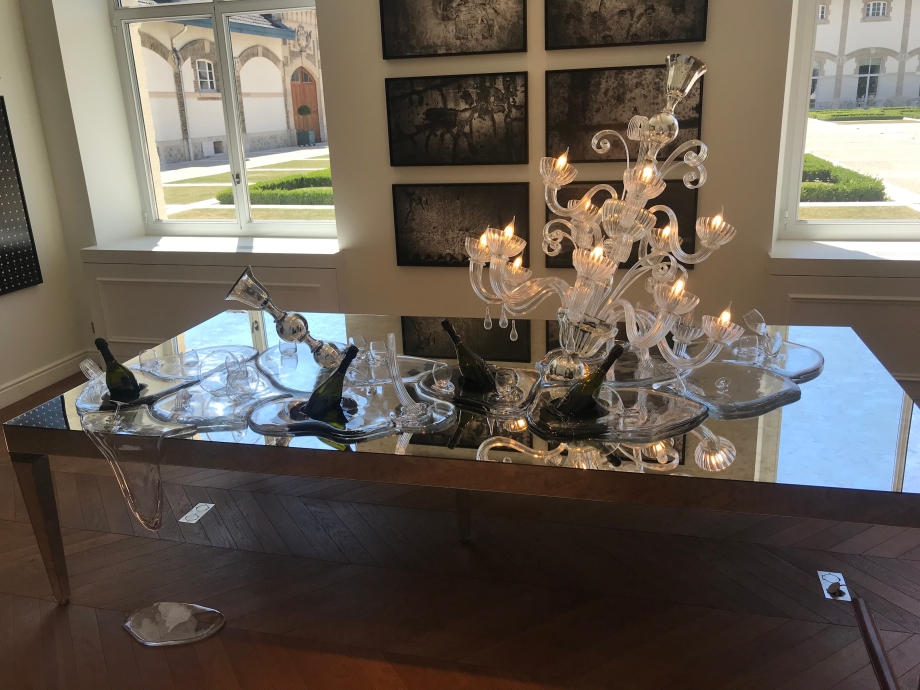 Amazing Dali-esque glass work that sealed the deal for me when I was doing google image searches of champagne houses I needed to visit.

A lot of artwork of the creepy faces carved into the Limestone caves over the years.

It was blistering hot this day. I was looking at the melted glass and I thought it was due to the humidity. It was perfect timing to enter the cool cave, which you will see shortly.

Ruinart is one of the oldest champagne houses and was established in 1729. This was one of their original posters in 1896. The son of the founder took the brand to the next level by doing these art deco advertisements, which became popular in the late 1800’s and early 1900’s.

The house is like a museum. An artist found some old ledgers of their champagne in a vault somewhere during renovations and turned it into “Cousin It”.

This foosball table below would be the centerpiece to the ultimate man cave.

I love gold and black, my favorite color combo. 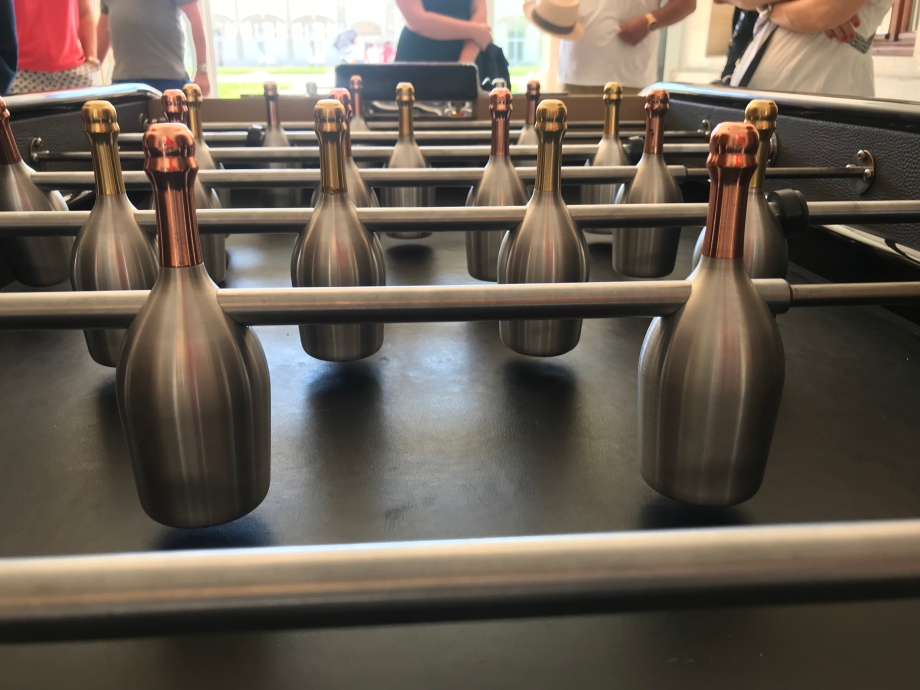 They are even arranged as rows of either Rose or Blanc de Blancs so you know who your opponent is. 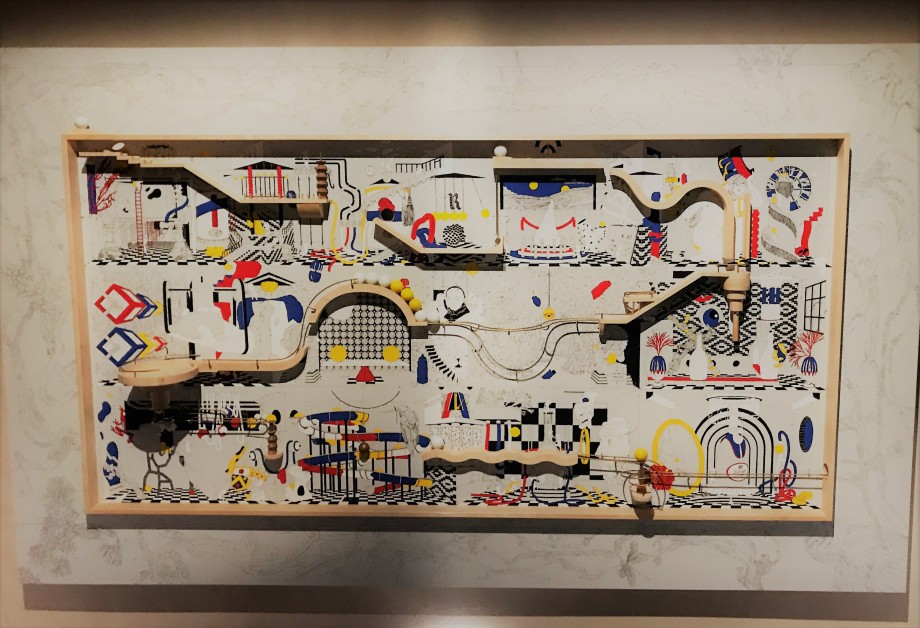 Another pinball toy an artist made that highlights the production line of the champagne.

Starts getting cool as we enter the bowels of the caves. Erika was even given a shawl. 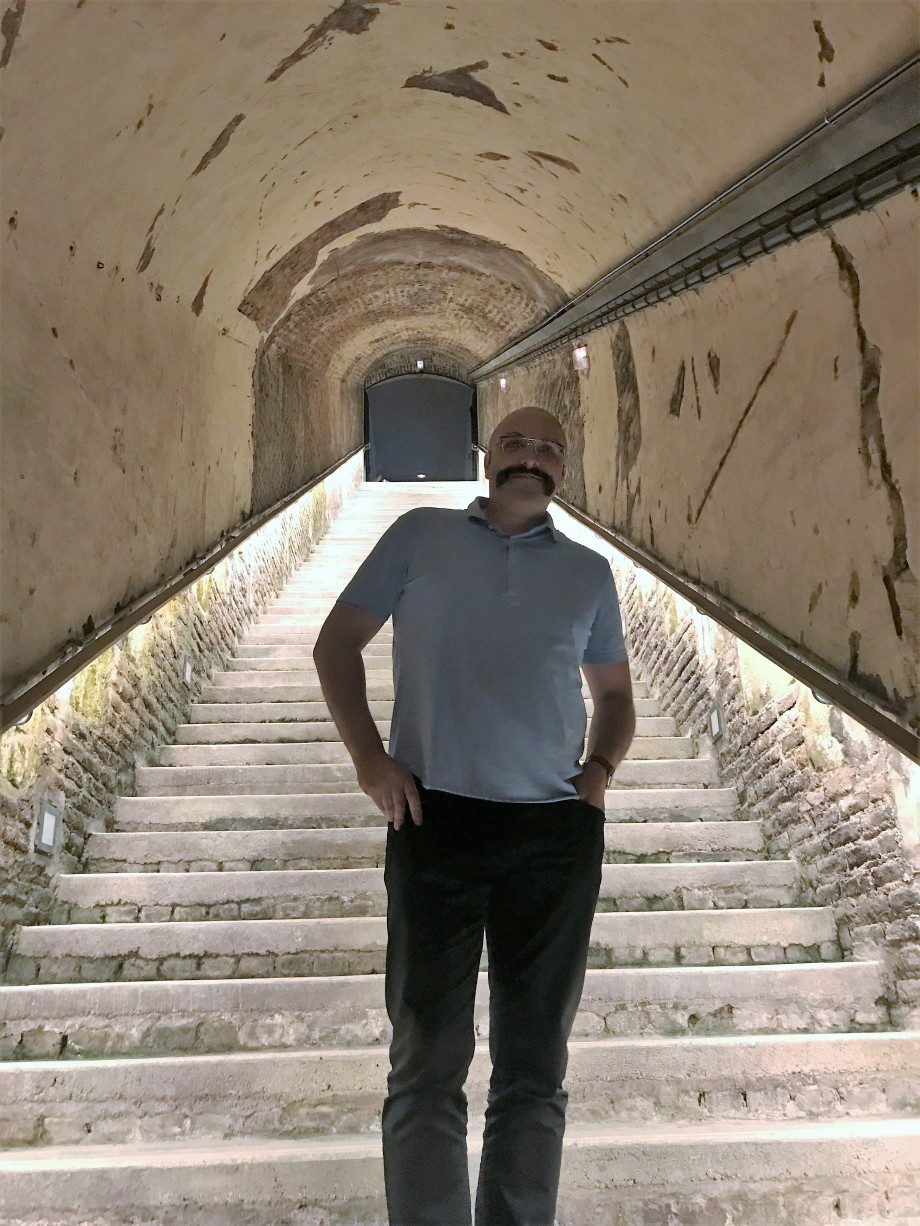 Talk about creative re-use of a limestone quarry. 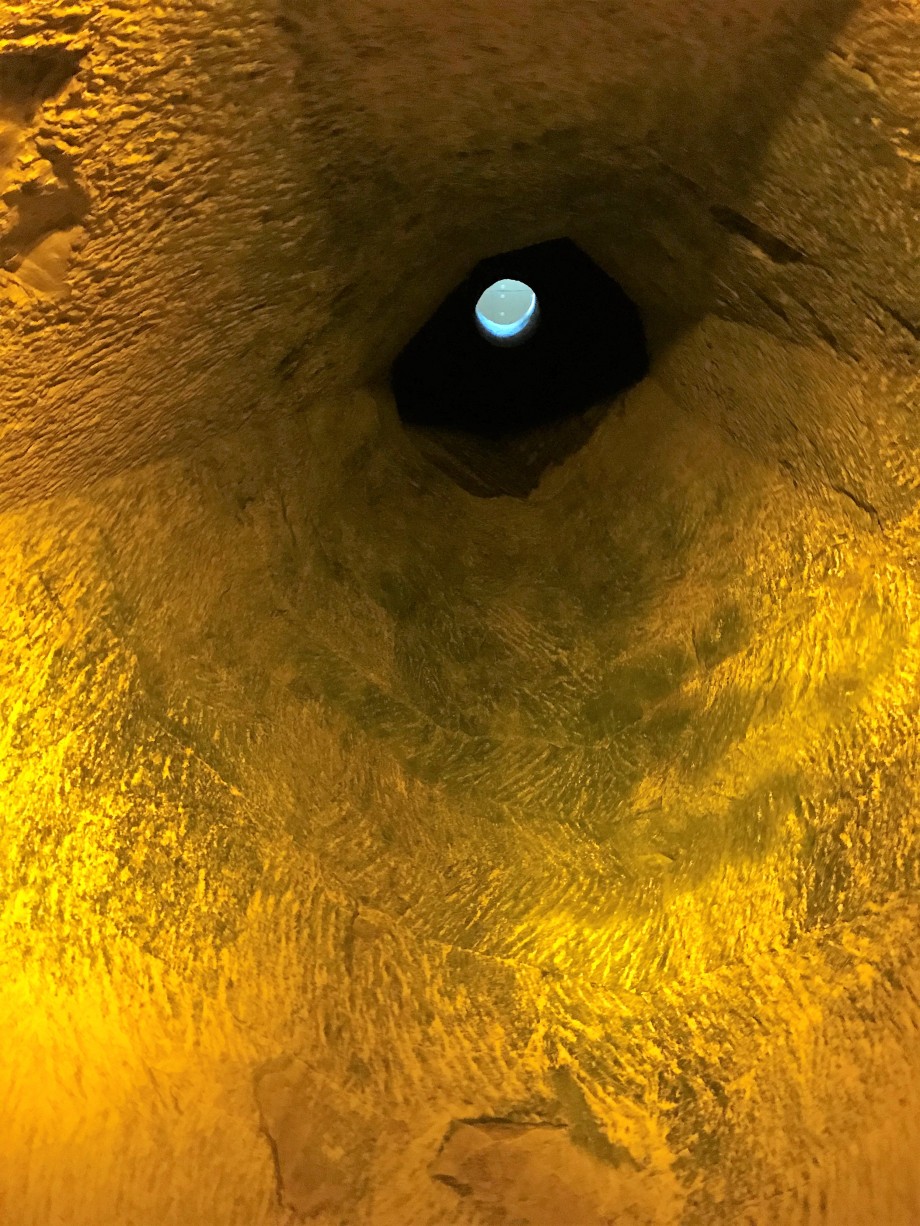 They would excavate from the top and go wider and wider as they dug down to maintain the integrity of the cave so that it would not collapse, and it led to these intricately carved caves that looked like something out of Indiana Jones and the Temple of Doom.

Some papal figure to bless this bubbly Jesus Juice. 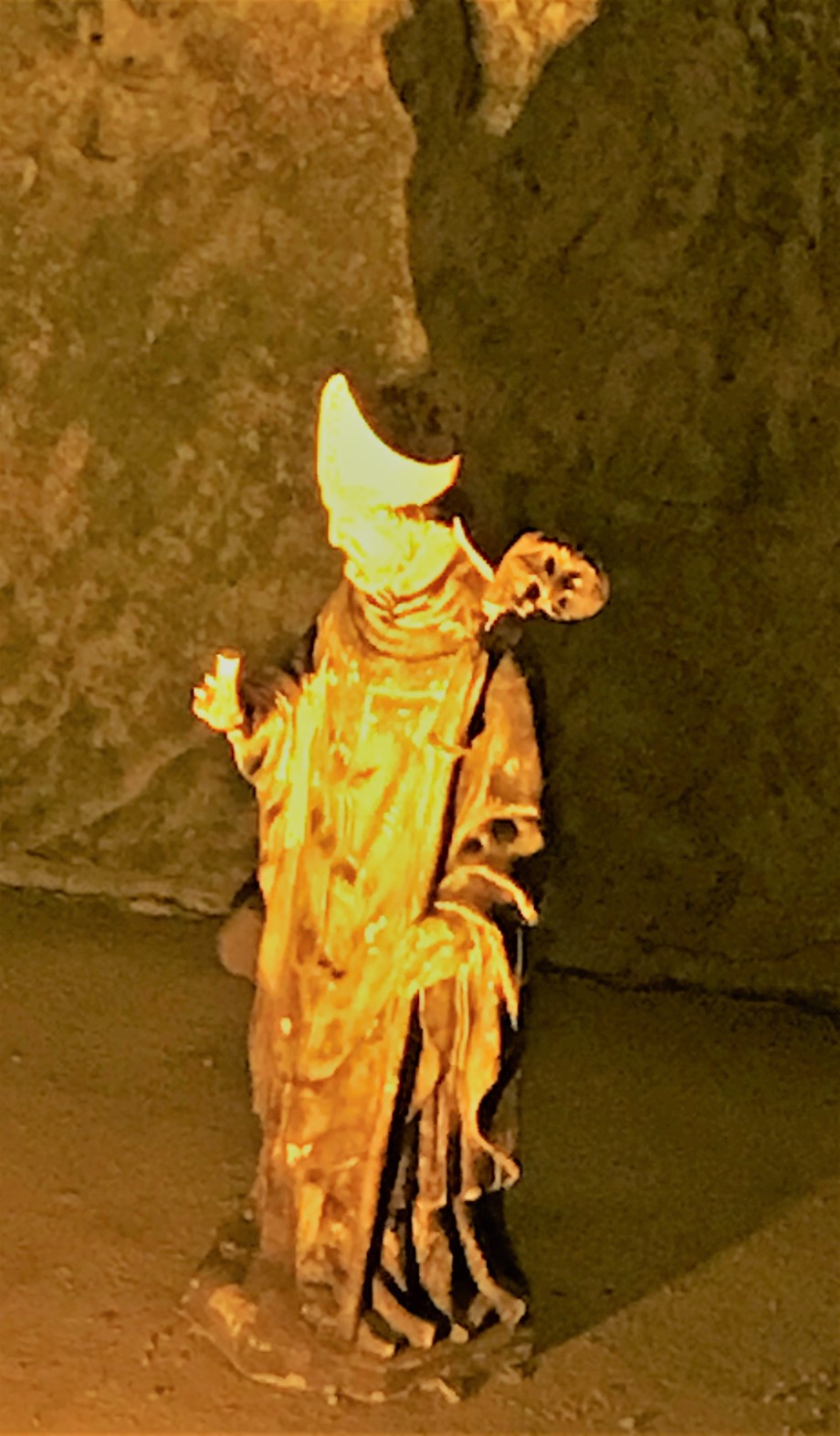 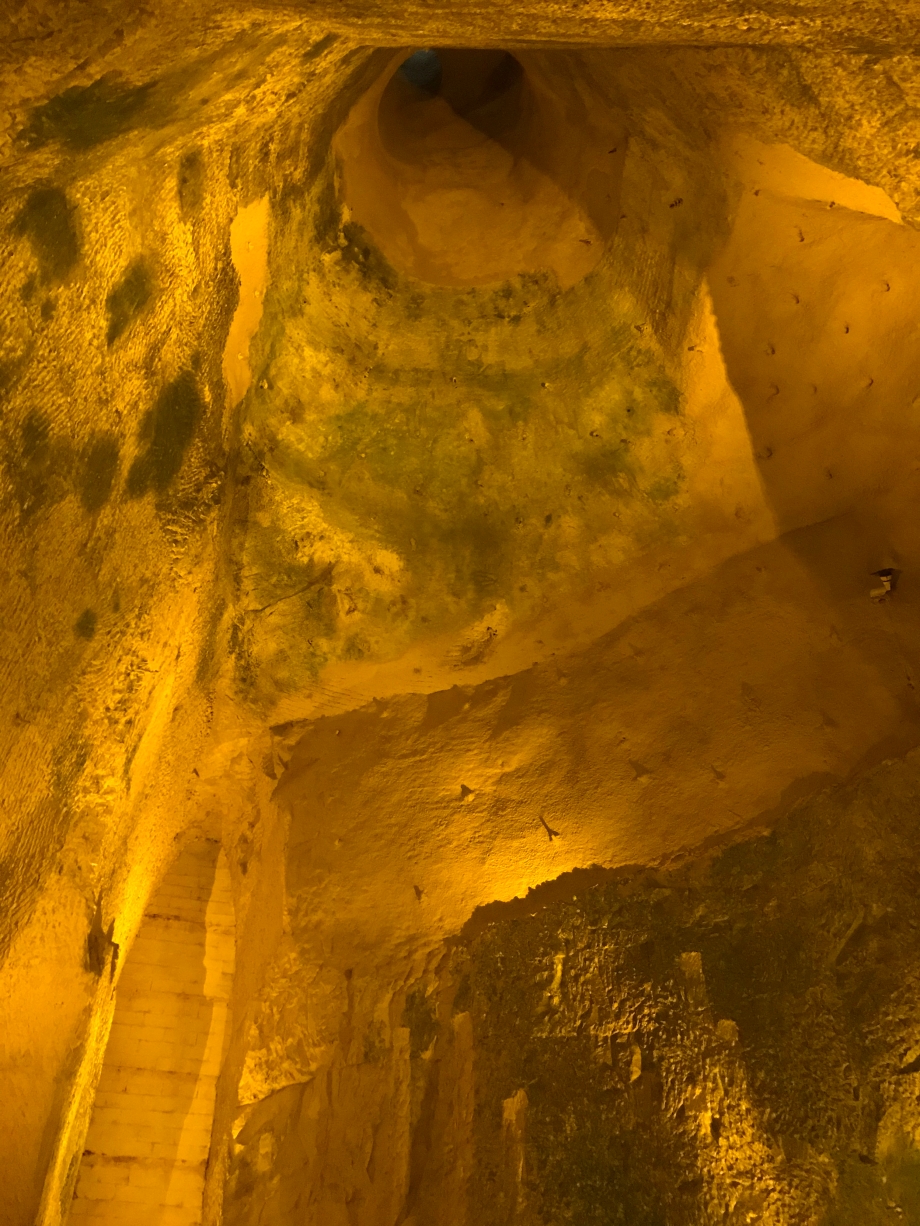 The clear bottles are for their Blanc de Blancs.

They store them in the position for some sort of process where they freeze the neck to create a cap, and then they pop it out or something. I wasn’t paying attention when they were explaining it. I think it is to extract the yeast and sediment. 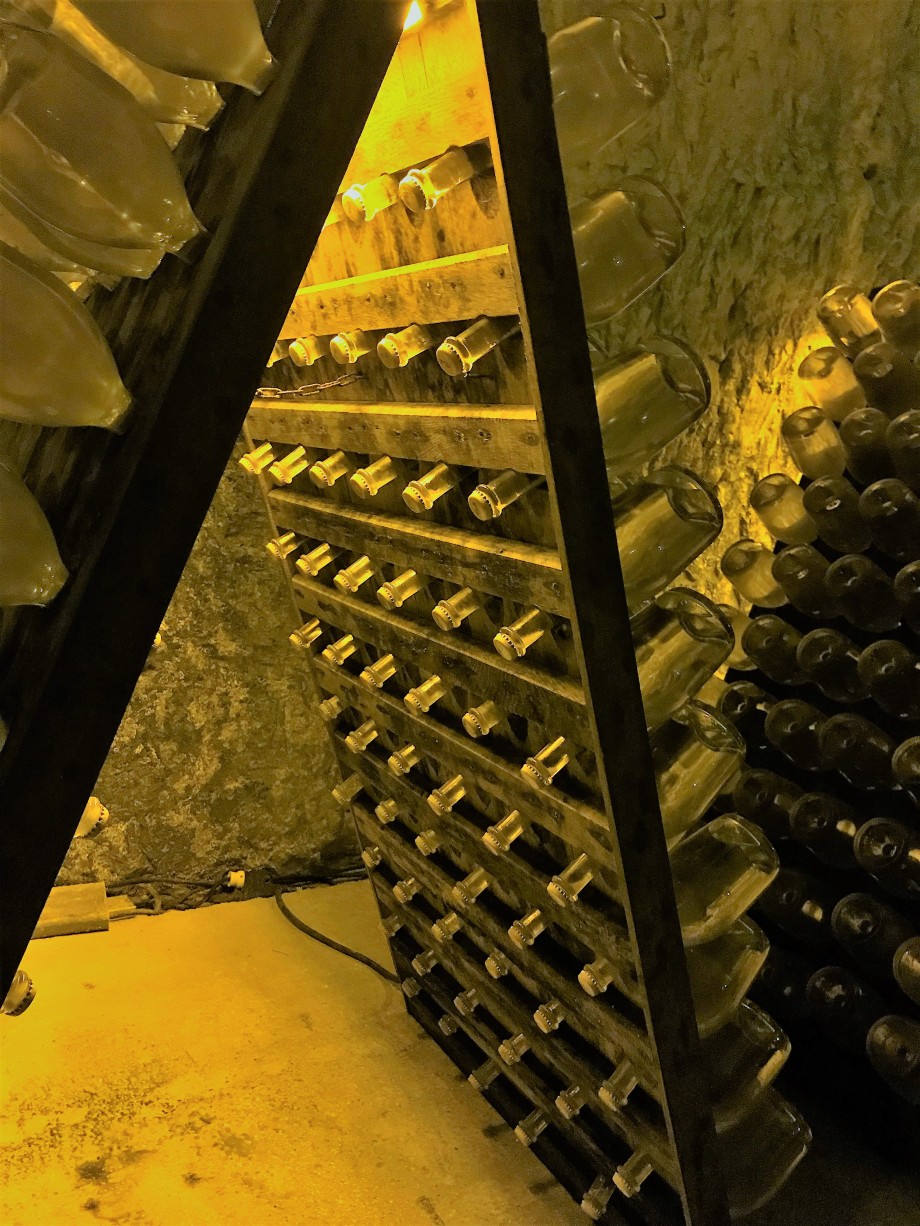 The high ceiling and lighting in here were amazing, dream-like. 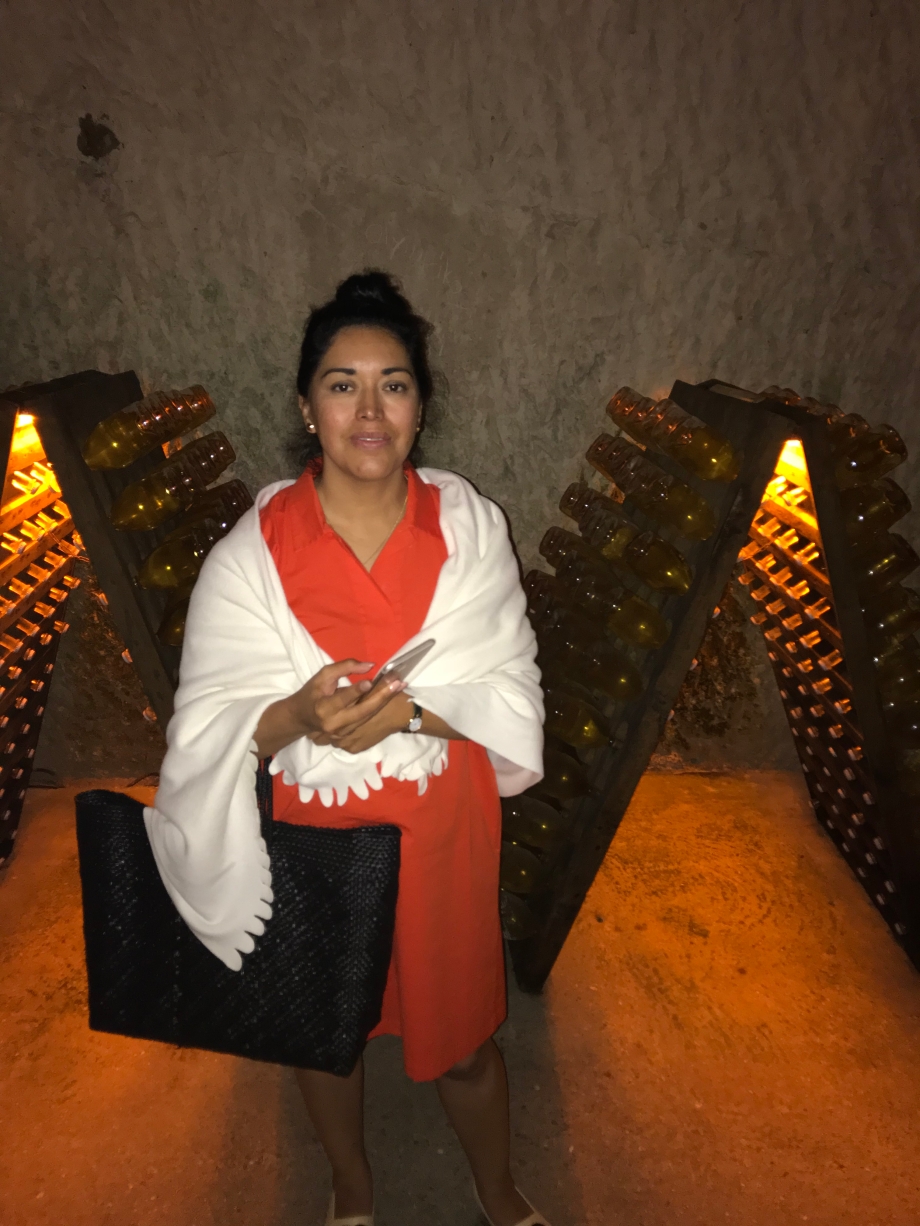 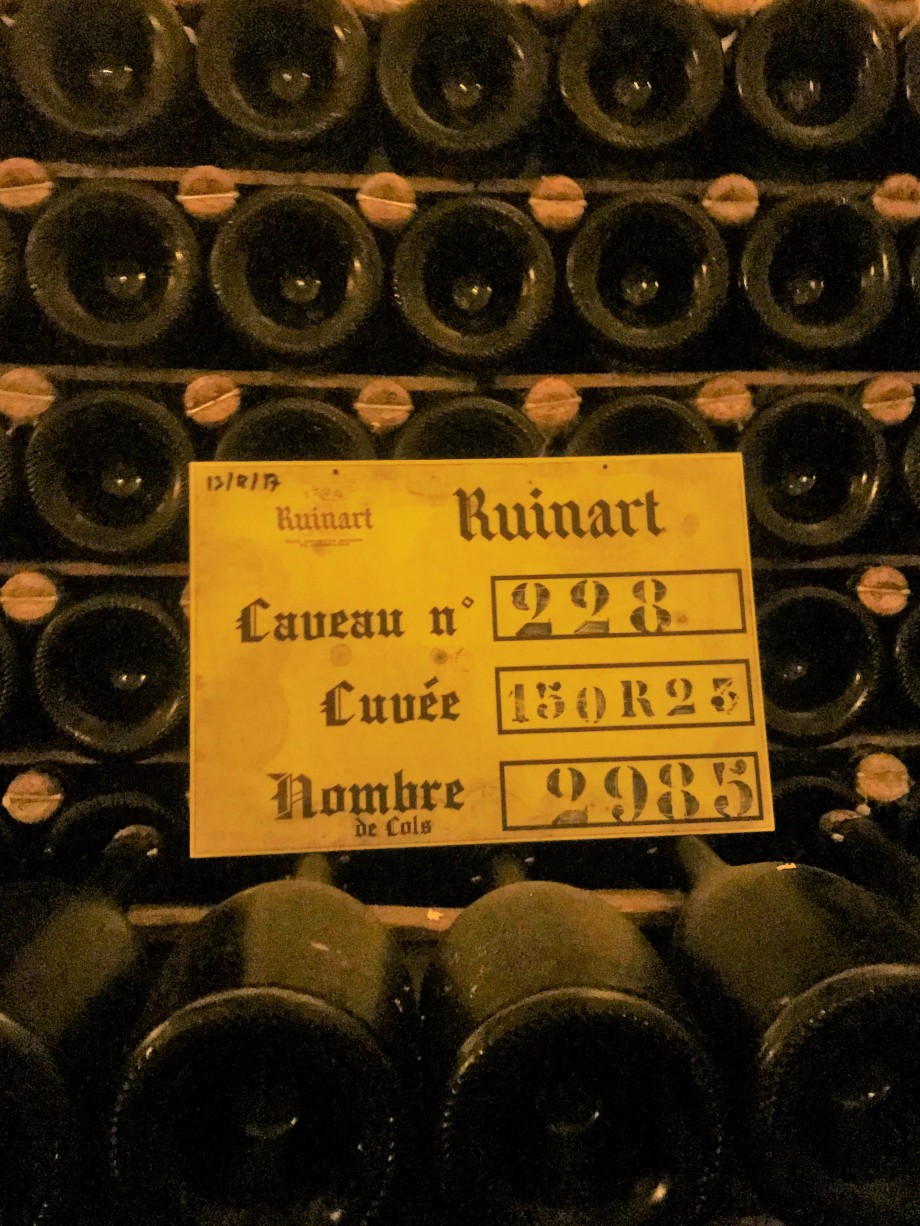 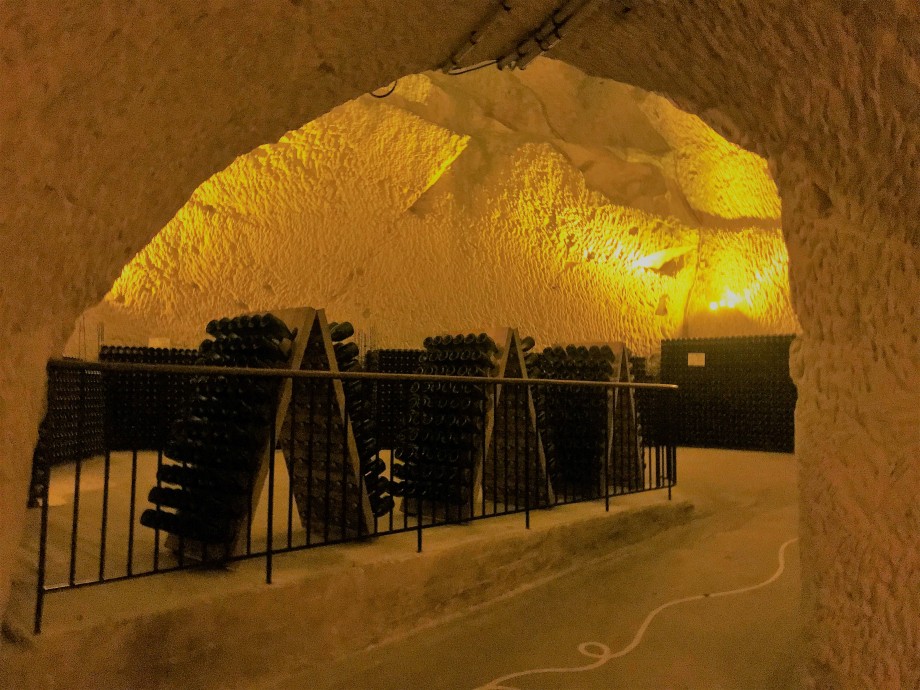 What a room this is. Stacked double. I need a wine cave underneath my house.

If you look closely at the wall below you will see one of those creepy face carvings that I mentioned earlier in their artwork. 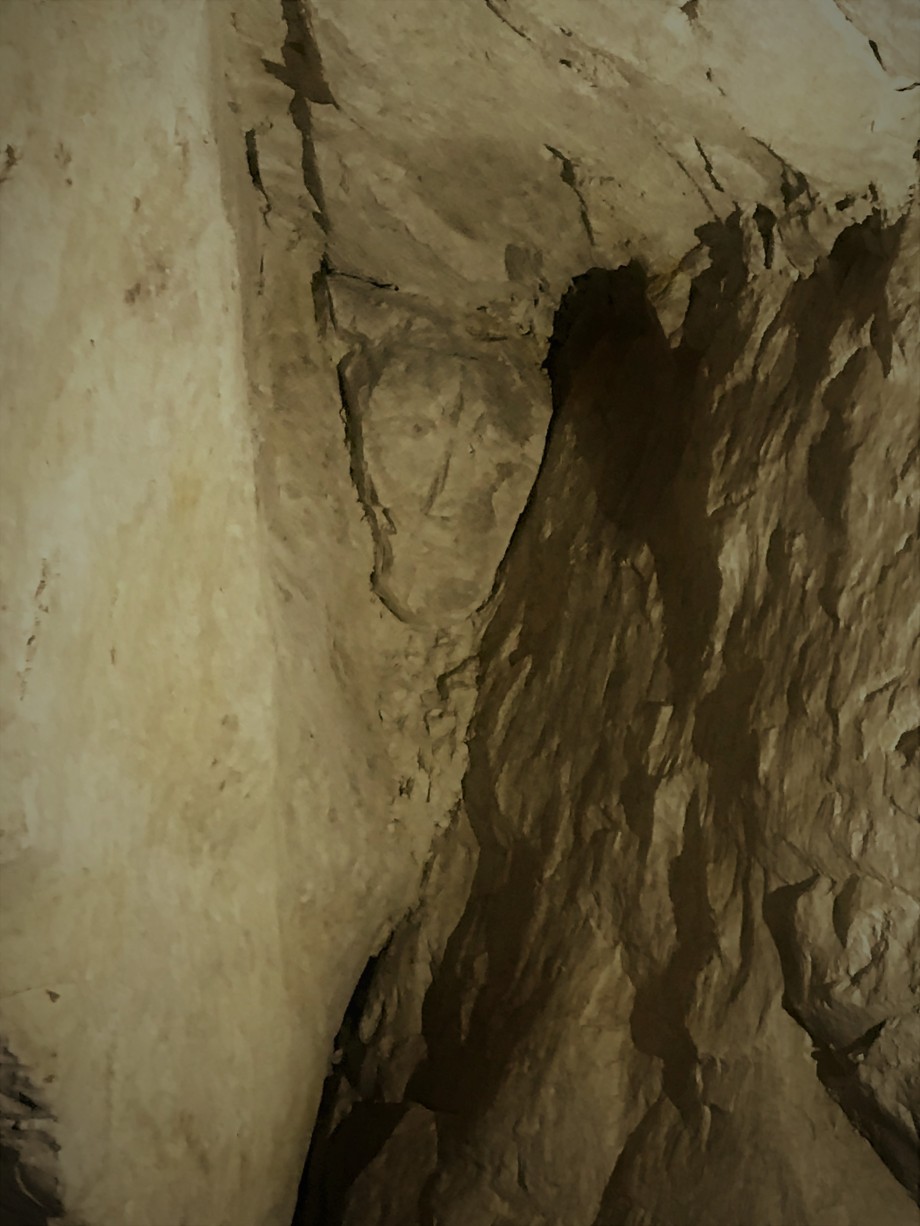 Our cave diving comes to an end. Time for drinks. Let’s ascend from the underworld.

Cute lamp made from their bottles. 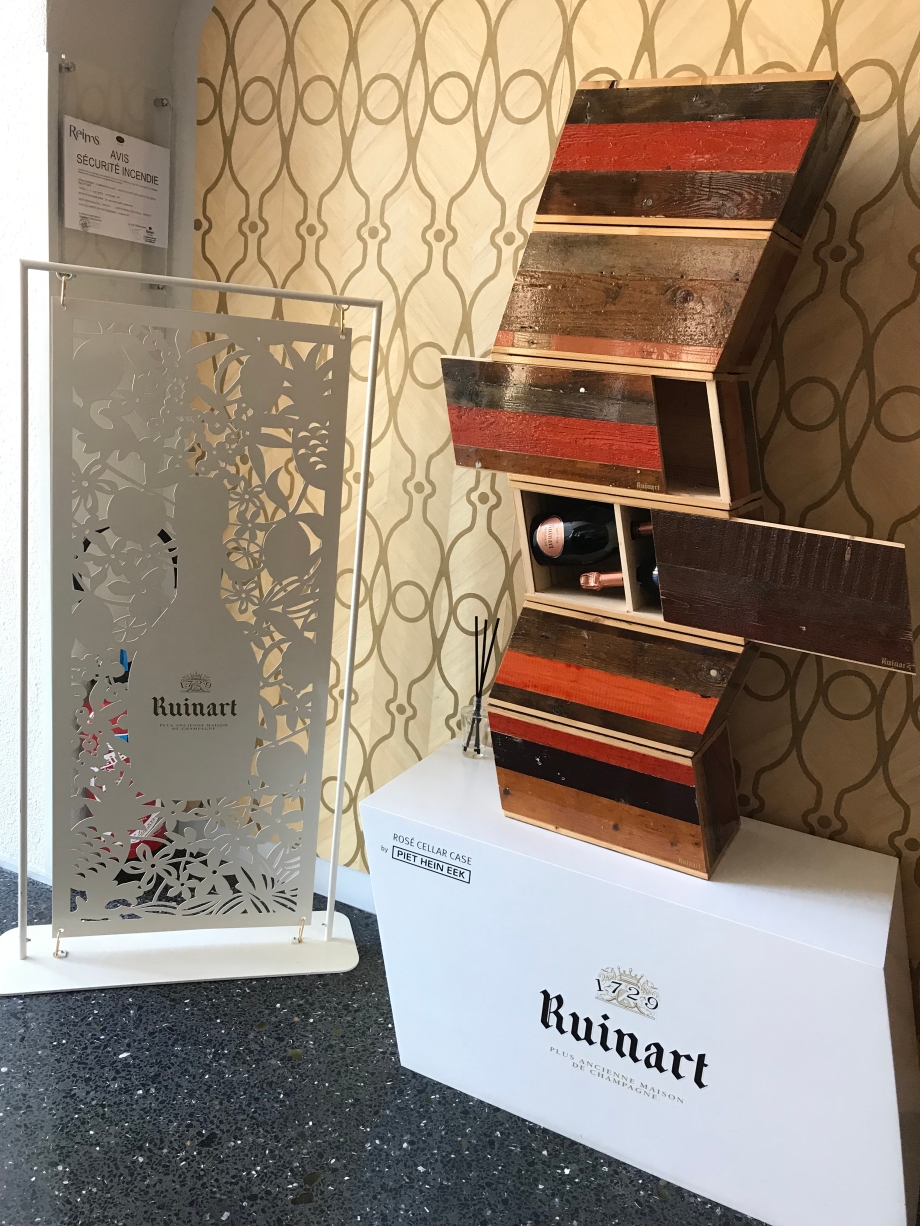 Nice artwork from their cases. 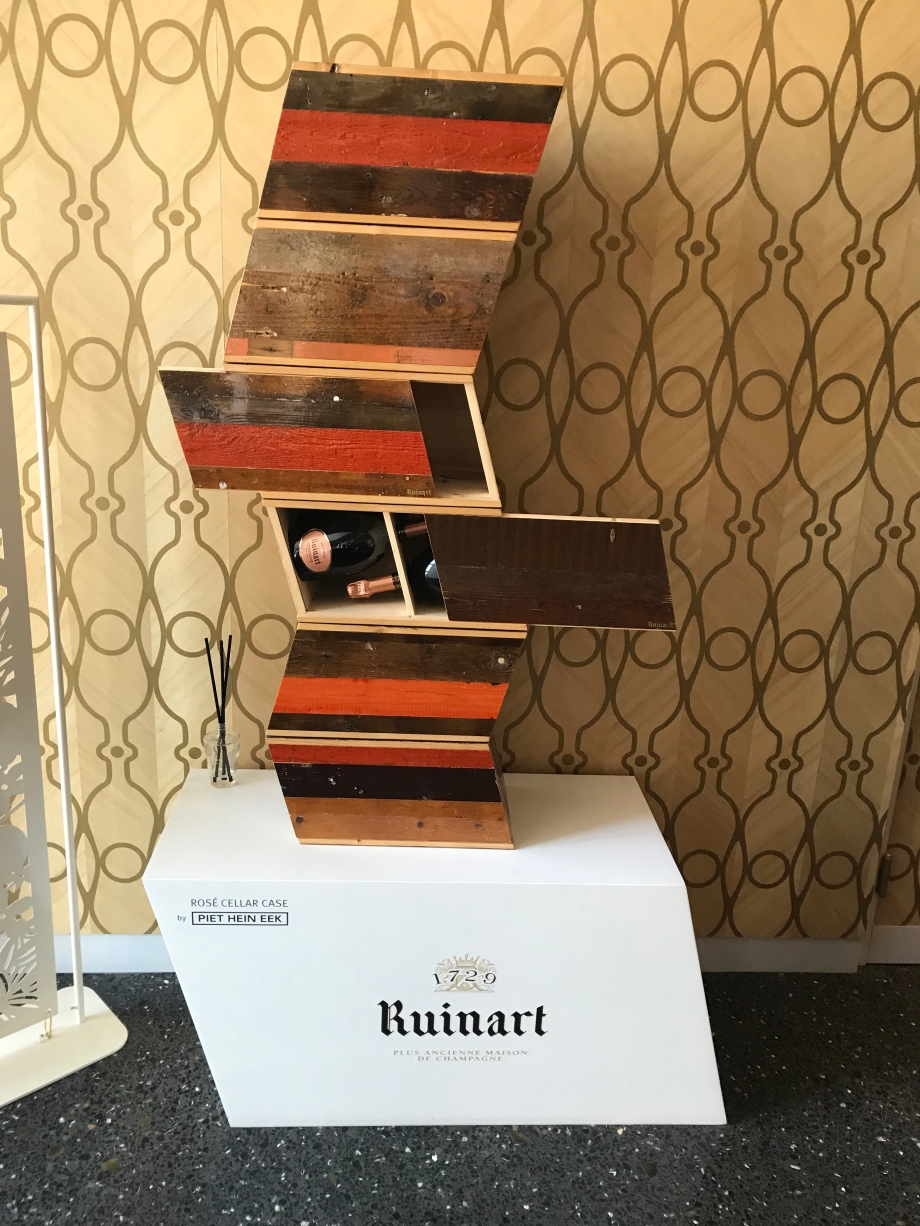 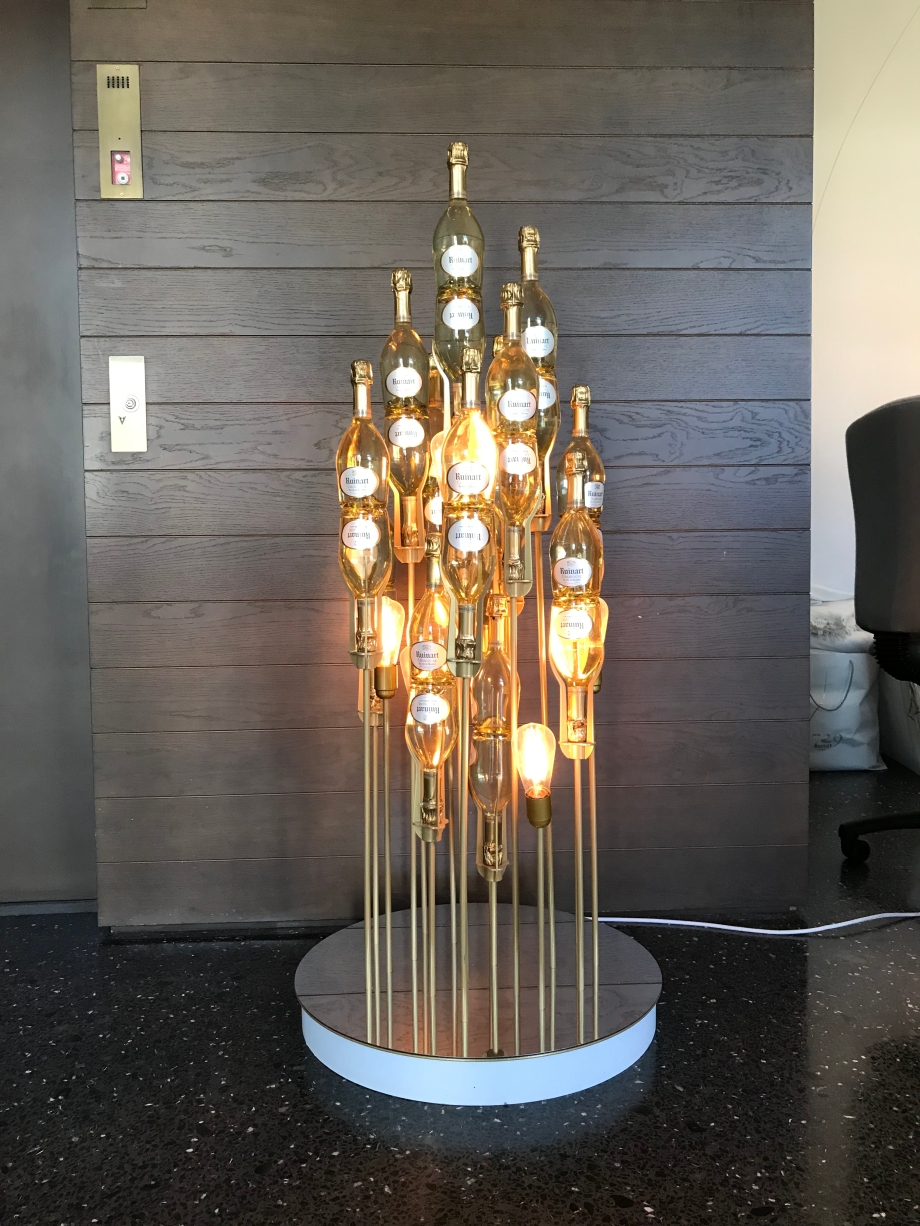 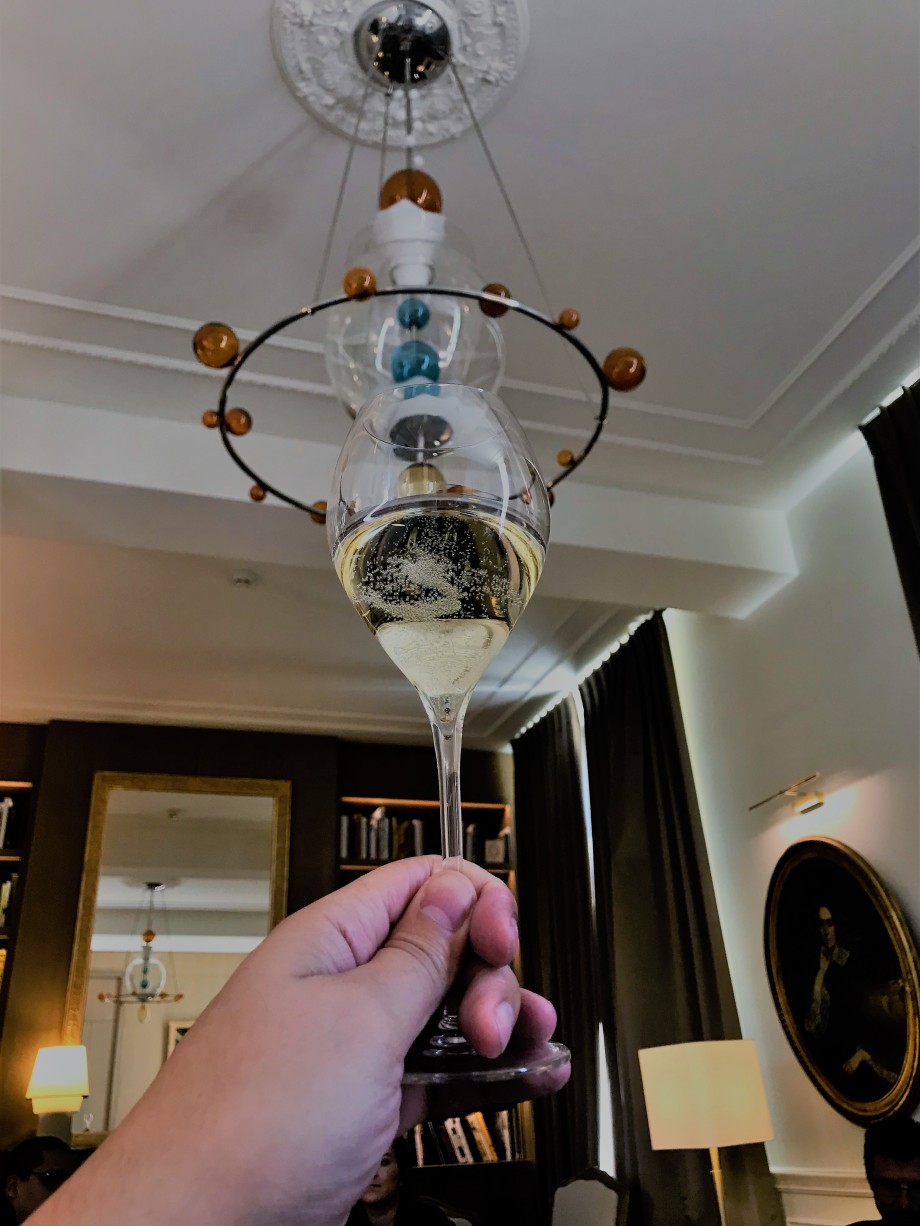 The 2004 Dom Ruinart Rose was nice, but the 2006 Dom Ruinart Blanc de Blancs was the best of the tasting in my humble opinion. From an investment perspective, the 2004 Rose Dom Ruinart is extremely limited. I found the 2004 to be a bit too gripping, bitter and acidic. The 2006 was very nicely balanced, with fruit, flower, and baked brioche notes all in one. I got a lot of tart green apple on the palate but a lot of baked bread and malty characteristics on the nose. The 2004 Dom Ruinart Rose scored like 97 points, and the 2006 Dom Ruinart Blanc de Blancs scored like 95. They could have done without the non-vintage tastings and dished out some more exceptional vintages, but I was happy with the two we did get to try. 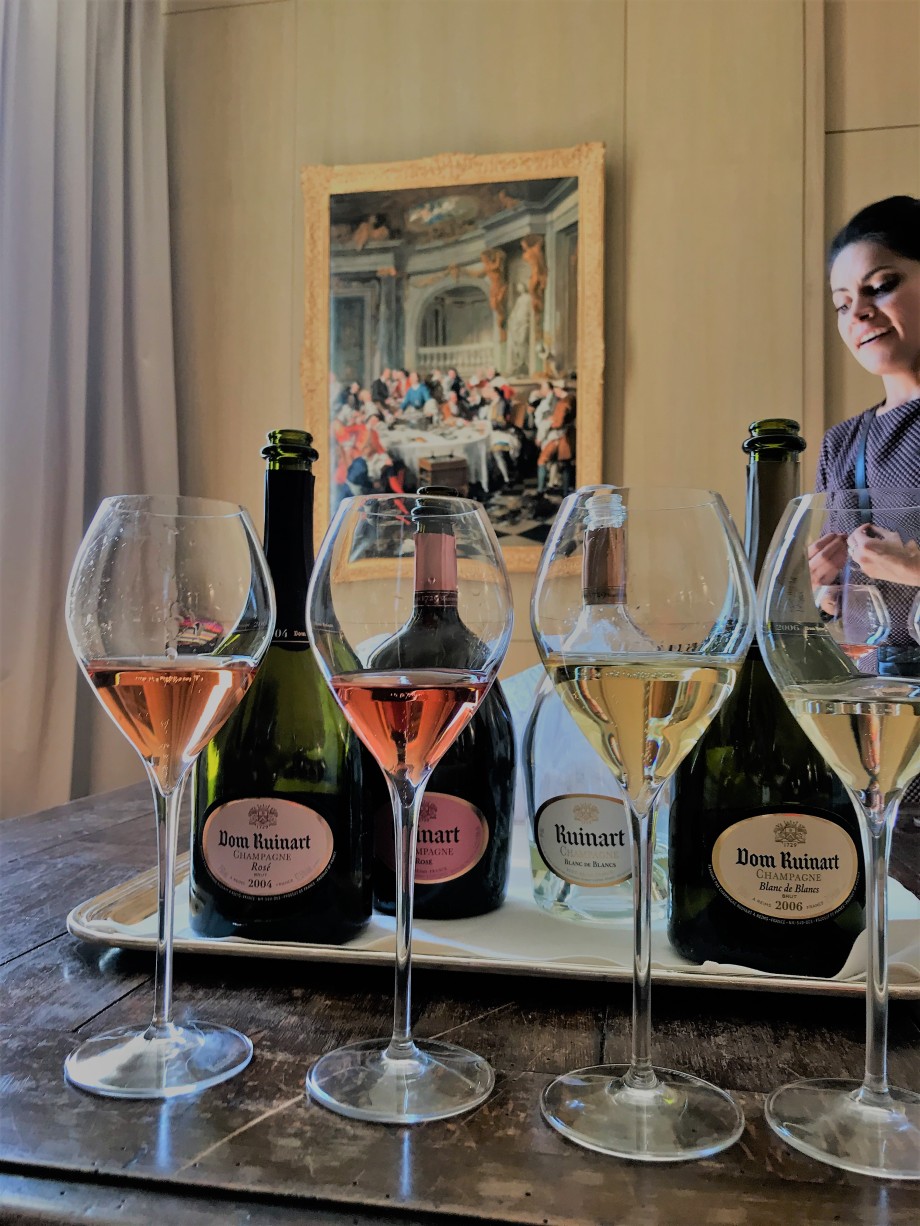 Look at that pale straw color on the 2006 Dom Ruinart Blanc de Blancs. That is clearly the one to buy out of all of them.

To be honest, the prices here are no different than anywhere you can buy them online in the rest of the world, so it makes no sense to buy it here and carry it home with you. Some of the prices here were actually more expensive, so just come for the show, don’t plan on buying anything here.

This was a fascinating painting of the court of the French King, who would throw these lavish parties where oysters were brought in to be served with the champagne. They actually used the time this painting was made as a reference to the style of champagne making back then, as there were no written documents existing explaining how it was made, etc. It was a rare pictorial documentation of the flat bottom bottle and color of the bottle, etc. This was all before it became a major export of France. It was known more as a regional quirky bubbled wine that gained popularity when the Kings of France took interest in it.

The whole idea of describing wine via color, taste, acid, etc, or what we know as modern-day sommelier-talk started at these parties that the King would throw. You can actually see the gentlemen in the painting staring at the glass and describing what they see and taste to one another. It literally was the drink of Kings. This is why it has a reputation of being served at special occasions, etc as it was used in coronations.

If you follow the eyes of a few of these Dandies in the picture, you can even see them eyeing the trajectory of the cork that goes flying in the air.

More shots of this amazing table.

That looks like a Lalique chandelier, probably costs upwards of $50,000.00 USD. I love the chalice on top of the chandelier. 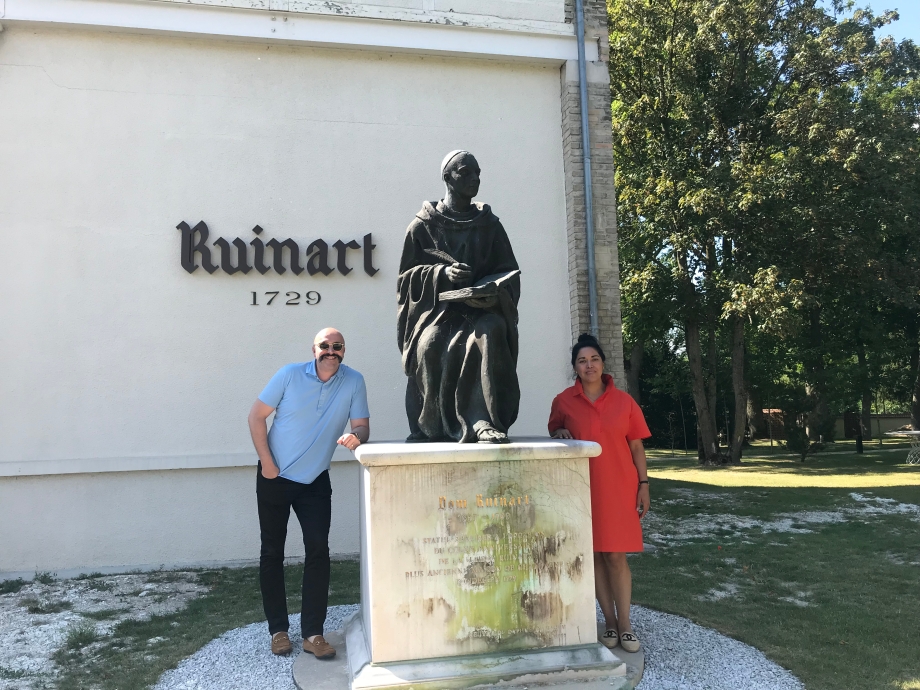 Here we are posing with the monk who started it all, Dom Ruinart himself.

Very nice visit. Though it was the only one we were able to arrange, we wish we had better VIP access where the guide takes you in the back somewhere and pops a secret bottle under the table, and that there were fewer douchebags coming here who have no idea what they are drinking. Do not despair if you can’t get into the houses, there are plenty of stores in town that have older vintages you can find, by lesser-known chateaus that you will probably get more bang for your buck for. Also, try to go to two of the Michelin establishments in town and do not miss their champagne pairings, which are out of this world, and are soon to be posted here.