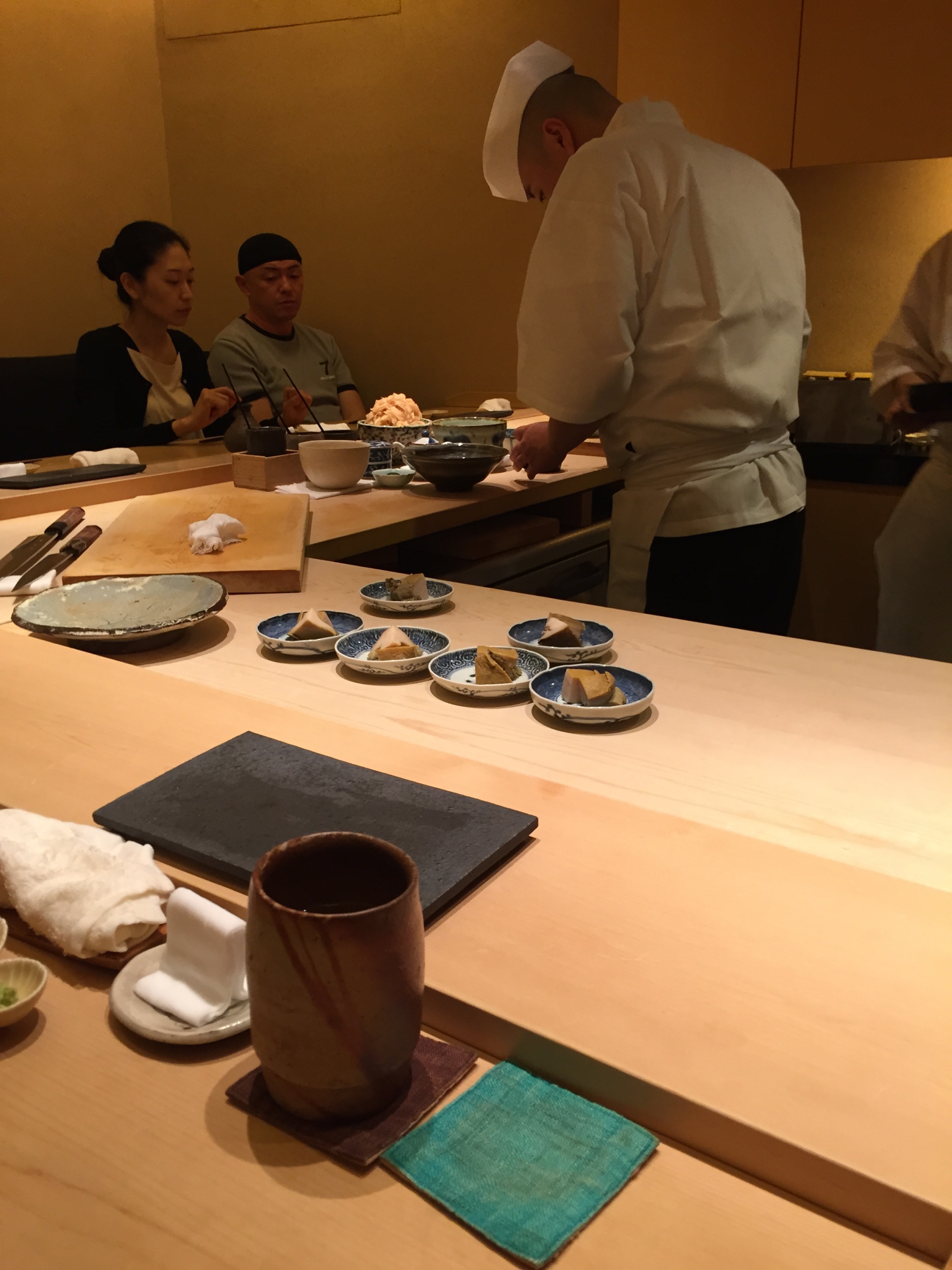 This is the most up and coming sushi chef in Japan. I wouldn’t be surprised if he soon gets 2 Michelin stars and reservations become impossible. Even sushi chef Sawada, whose 2 Star place from Anthony Bourdain fame where we are going this coming Saturday serendipitously was a customer here with us tonight with his wife in featured image. He himself has a 3 Star sushi restaurant.

We started with turbot, a meaty white fish that I had reference in our first dinner at Narisawa, very clean palate cleanser to begin with, cut so thin it was translucent.

Second up, bonito…this blew our mind, #2 favorite sushi we had here. Look how dark the meat is and how thick the slab is on this sucker. It was smoked lightly, tasted like hickory oak that lingered in my mouth for ten minutes on. Never tasted this in sushi before, almost like smoked salmon, but the fresh version, not a pickled salmon months old and slimy.
Third fileted and steamed firefly squid, with none of the fermented fishiness that usually accompanies this squid variety.
In between an egg and crab custard.
Then a meatball and sardine soup.
Fourth up, abalone. I have never had abalone this soft and spongy. I just chewed on this at length and moved it all around my mouth. Impossible to make this good in LA. Every abalone I’ve had here tastes like rubber.
Sake bottle bigger than my torso.

Grilled scabbard fish up next, never had this before, similar to Halibut. Followed by steamed cockle sushi, again, a mollusk you tend to find more in UK, etc. Never had this in US.

Now the bluefin tuna, we started with chu-toro, this is the medium fatty tuna. This was the perfect combination of chewy, but fatty enough to leave a milky film in your mouth.
In between the tuna gradation came the ika, squid. This was beyond words, buttery top layer, chewy elastic squid layer underneath.
Then the O-toro, fattiest cut of tuna belly, hard to get outside of Japon, was falling apart as I lifted to my mouth. Erika went nuts over this one. Dissolved in seconds.
Then some grunt fish, like a baby red snapper. Always one of my favorites, just with lemon and salt, no soy sauce.
Followed by Maguro, blue fin tuna. Look how dark that meat is. I had to revisit this later.
Then kohada, gizzard shad, member of the sardine family. I watched a video of Jiro talking to Rene Redzepi of Noma, where Jiro said that the one sushi that you can judge a sushi chef by how they make Kohada, This was nothing like mackrel, etc, no fishiness, you just taste ocean.
Then red clam, akagai, very firm, yet slimey, sweet, only slightly fishy, much more tender than red clam I’ve eaten in LA.
Next up, my favorite sushi I have had all trip, Aji (King Mackerel). The green onion sauce they put on top, combined with how freaking soft and fleshlike this fish felt in my mouth was like a wet french kiss after having eaten kimchi. I later revisited this along with the Maguro mentioned above.
Next up giant tiger shrimp, lightly steamed. I’ve always preferred sweet shrimp in the US, but in Japan, to not get this because you think it is an american sushi shrimp is a major mistake. I have never tasted a steamed shrimp that had this amount of sweetness, and it was crunchy compared to dry like the variety you’d get in the US.
Followed by the sweetest damn uni ever, even Erika had it and liked it. I think what made this totally unique was that he used sushi rice that was made with red rice vinegar, at first I thought it was brown rice, but I was wrong.
Then a totally Japanese version of sea eel. Supposedly, you are not supposed to even eat river eel, according to the sushi chef because the definition of sushi is that it comes from the Tokyo bay, Edo, this was totally different from all the grilled eel soaked in terriyaki sauce that you get in most US sushi places, even the nicer authentic places. It was interesting in that it was steamed vs grilled. This was Erika’s favorite.
Finally Erika got a special hand roll with green onion shoots and slices of chu-toro, heavenly.
Ended with some black sugar ice cream.
Divine