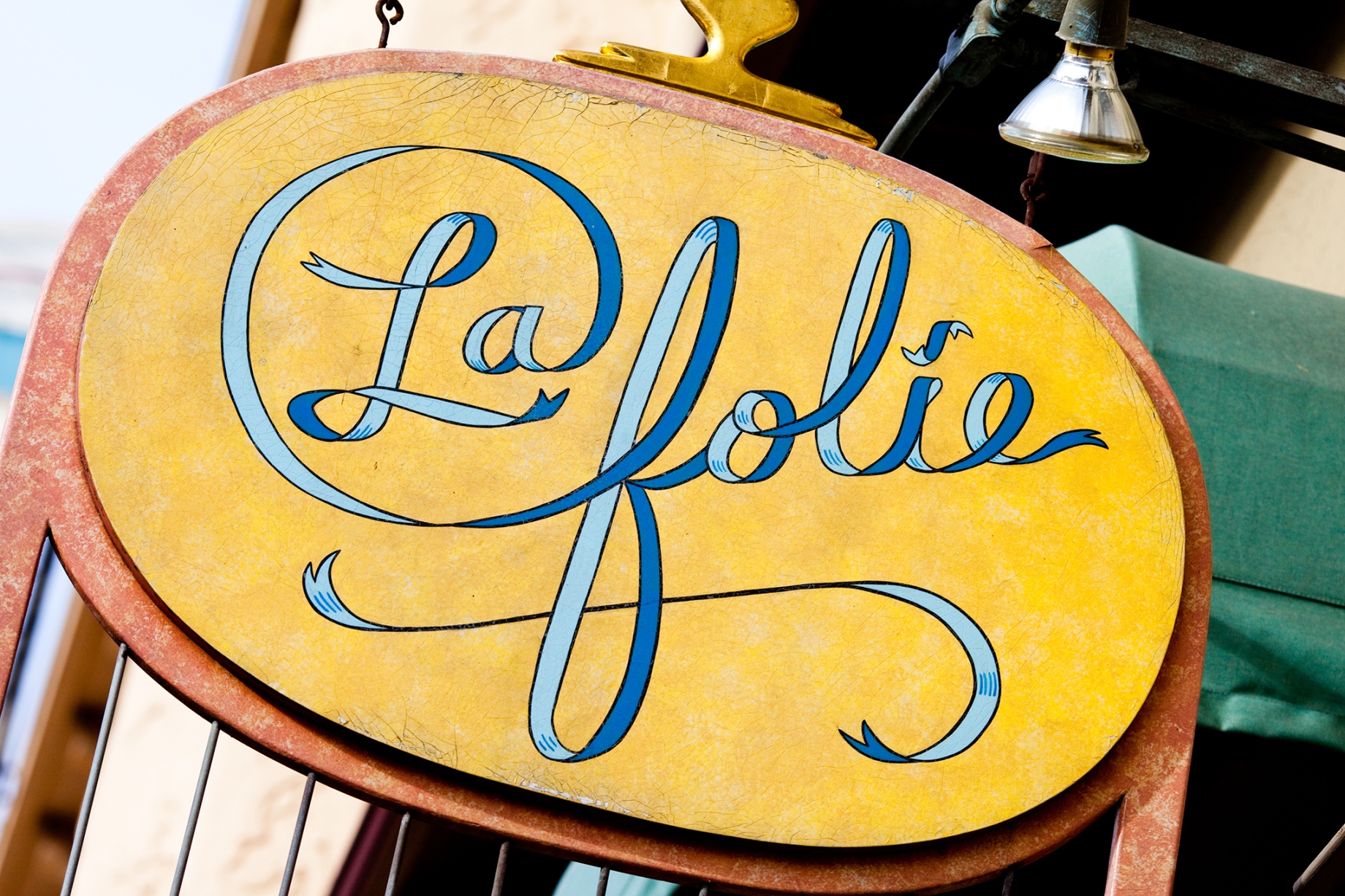 We reviewed several traditional French places in SF to have classic traditional French food, saw a lot of recommendations for Gary Danko, which also had one star, but since I liked the chef when we saw him on Bourdain’s Layover episode this tipped the scales in their favor. Also, since I am a Psychiatrist, what better theme than La Folie, as in “Folie a deux”; a shared delusion between two people of close association.

First of all, SF is catching up to NY with Michelin stars. So far, we’ve been to 3 out of 4 Three Starred Michelin restaurants in our great state, except for Saison; which will be next on the rotation. They need to hurry up and build the damn high-speed rail from LA to SF already, because the Michelin grade food in LA is frozen in time. First of all Patina is an absolute joke of restaurant that should have it’s one measly star stripped. At least Providence maintains it’s 2 stars, though inconsistent at times. Also, our Westside aversion keeps us from Melisse. For a city the size of LA it’s really sad to live here when you see all these Michelin ranked venues sprouting up all over the world, and even SF. Ethnic food, hole in the wall? LA has this in spades, but Michelin grade? Even the guide said that the food here has too much variation in quality, and any restaurant can become popular as long as a Kardashian or something frequents it, and that it is a waste of time for the Guide to even come anymore. Enough of LA, let’s talk about SF, what a great place for a pansionista!

First the wine. This is what I love about a real French restaurant, the wine list is biblical in variety. Just the Burgundy and Rhone list were pages, I was salivating. The som who used to work with George Perrier in Philly at Le Bec Fin was an excellent resource and found some middle of the road Cote-Rotie and Rhone wines that were funkdafied ever so nicely. They even had some Jura white from Arbois as a nice aperitif and cheese pairing wine. We were very pleased. 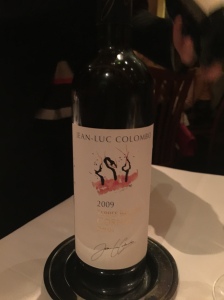 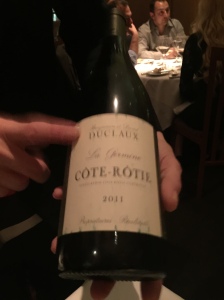 Since the menu was more of a course selection, we did not get a take home print out of the tasting selection and details of the dishes, so I am going to list most of these by memory. It was unique in a sense in that each person can get their own number of courses, be it 3, 4, or 5, and since there is such variation from each individual’s meal, it makes more sense to get several bottles rather than do a wine pairing, so it becomes more of an un-regimented shit show vs a well choreographed ballet like at other Michelin places. So, as a palate cleanser, some micro-greens/pea sprouts, with egg yolk in incised shell, very fundamental and solid started to whet the palate. 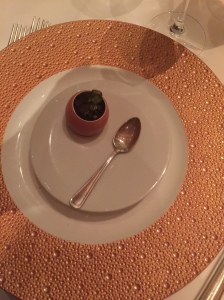 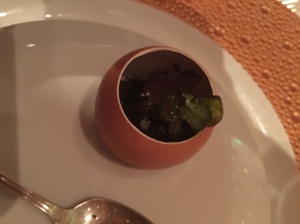 Then Erika got the hamachi crudo as one of her first courses, which had black radish, and fennel salad with seared skin and slices of habanero. Very solid combo of refreshing and lemony with good contrast to the hamachi from the fresh herbaceous produce used. It went well with our Rose from Provence. Again, the creativity is run of the mill. Who hasn’t seen a jalapeno slice on a hamachi crudo before, I mean it’s almost cliche, but the chef doesn’t seem to care, he knows that the flavor is what you take away. Again, it’s a one star place, I wasn’t anticipating a philosophical debate on the way home like the way Coi or Benu left us. 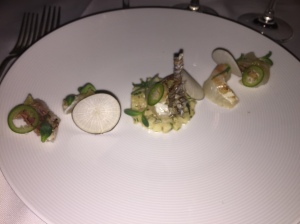 Then came my ostentatious first dish, the Osetra Royal Caviar atop creme fraiche with a blini with a lobster claw cooked inside of it like a coquette. Pure decadent hedonism. No esoteric molecular gestures, just a hypnotic presentation with the star of the show in the middle of the plate. I liked the twilight zone hypnotic crop-circle effect, went well with the Folie theme.

The next plate was a charred leek salad with black truffle, matsutake mushrooms, enoki mushrooms on top of a log. Talk about forest floor. Everyone wants a log! This calls for The Log Song from Ren and Stimpy.

Next dish made me drool when I saw it on the menu…tempura’ed duck egg. I haven’t had a tempura’ed egg since the quail egg at Kyobashi in Ginza Japan, could not wait for that gooey yolk to coat my mouth. This had a bright runny yolk and was served a top charred kale and wood ear mushrooms with black truffle and some sort of reduced gravy with duck bones and assorted parts. 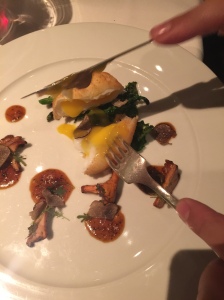 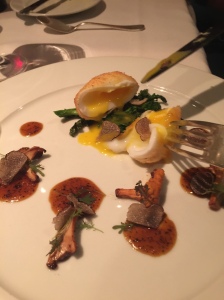 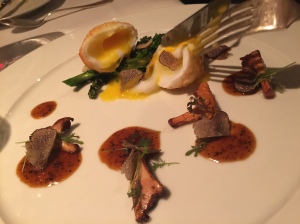 Next up was the striped bass. Erika got this one. Resting on lentils and for the life of me I can’t remember the sauce, but it was something that caught my attention, maybe edamame/or even lima bean reduction? 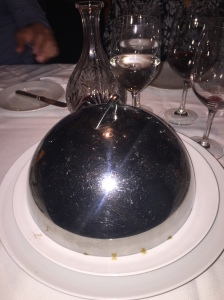 I love what’s next. When the average Joe refuses to eat this stuff, we saw the more for us; especially Erika who loves pig’s feet. Warm Pig’s feet, sweetbread and lobster terrine with frisee and watermelon radish. Ouuuuf, offal to die for! Took ten hours of man power to make this dish. 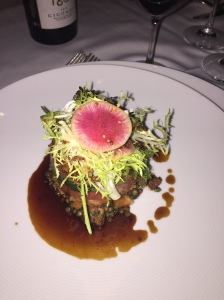 The following dish is the reason why Foie Gras is back in LA. This is the best foie in CA. Atop a poached apple in it’s reduction, perfectly seared lobe of foie with a cinnamon stick. Hedonism at it’s finest. Chef spear-headed the repeal of the foie ban in CA. Thank God!

Then the best beef in the world. A5 Wagyu , the “cap” cut. Important to always ask for the “cap” cut, it is the best cut of the entire steer. For my doctor friends, this is the spinalis dorsi muscle, way back from anatomy class. Chef has to special order this cut as there are only so many to go around to all the restaurants in town. It was prepared with sauteed matsutake mushroom I think and baby yukon gold potatoes. Hearty dish to go with the 2011 Duclaux Cote Rotie. Heavenly. 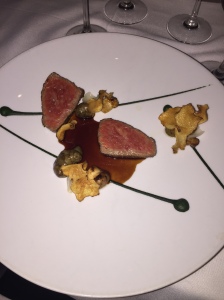 Finishing of the meat portion of our meal was the lamb chop, perfectly succulent, prepared in the classic way. Bone marrow reduction, look at the fat loculation ponds in that sauce. With some pickled, then steamed vegetables. Pickling before steaming, simple concept, you see a steamed zucchini on the plate, thinking to your self, watery tasteless mush, but then the slightly pre-pickled slightly brininess and semi-firm texture throws off your expectation. It also had a small slice of a quiche like meat pie.

Finally came the desserts, we obviously got the very stinky epoisses cheese prepared in a fondu style, very surprisingly dirty. It’s already a runny cheese, but to melt it down, raclette style, was a nice preparation of this cheese. However, I forgot to take pictures of it, so all we get to post is the row of canele’s. I freaking love this stuff. I first was exposed to it in Philly during med school when a French cafe in Center City on Market street made it. At that time in 2003, it was the only place in town making it. Supposedly, back then, you could only buy the cast copper pots to make this in France, but then by 2010 it caught on and became a fad cult favorite that is served at most French Bakeries. They are best when they are piping hot, super sticky and slightly hardon the outside, and soft, warm and moist on the inside, with not too much overpowering from the vanilla flavor. We also had this treat multiple times in Bordeaux, where the dessert actually originated from. The story goes that the wineries would use egg whites to remove impurities from their wine, and then donate the used egg whites to nunneries to make canele for the poor children in town. In addition, caramel in between paper thin wafers, almost like the Mexican cajeta candies, with sugared jellies, and dark chocolate truffle with gold flake.

Again, we come to a classic French restaurant to get the classic dishes, high quality ingredients, labor intensive, fatty and rich food that has been tried and tested for centuries. We don’t care if there aren’t any molecular acrobatics, if animal rights have been considered, or Vegan/gluten free variations are offered, we just want timeless, delicious food with every variety of French wine known to mankind. Solid one star. If they stepped up the service here, maybe itcould verge on 2 stars.