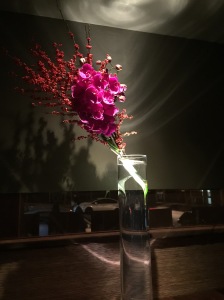 This was our first dinner for the SF trip. Loved the ultra-modern, wood clad minimalism with splashes of color against the muted background. Felt like we were back in Japan. Very tasteful decor. Due to the restaurant being very vegetable-centric it felt like it was on the shorter side of courses and pairings, but the potency of each item more than made up for that.

The first amuse-bouche to start: aptly named; California Bowl, puffed rice cracker, sprouts, and avocado. Very nice, chicharron-textured puff rice, the slice of lime and avocado made clear reference to chicharron as far as we were concerned. Felt like an anthropologic metaphor linking the roots of California produce to the culinary traditions of the Mexican migrant farmers who bring this produce to the markets in SF, where they themselves are subsequently being pushed out by gentrification, which is most pronounced in SF due to Silicon Valley. Then adding another layer to that concept, and taking what looks like and tastes like chicharron but making it out of vegan and gluten-free ingredients, the culinary heritage of the Whole Food buying oppressor. Truly a California Bowl in all it’s contradictions. 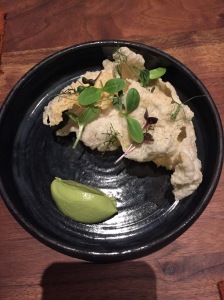 Then; sno-cone niabell ice, with wild bay salt. This really refreshed and the texture was the star of the show. Strange, but it started off hard with dry ice stickiness as it hits the tongue, with an initial resistance upon chewing, then giving way and crumbling rapidly to a powdery/chalky consistency, finally coating your mouth and evaporating where only the essence of grape is left. We liked that you can texturally feel the changes in the states from solid to liquid to gas. Like a chemistry class in my mouth. Almost the silky mouth feel you get from a very tannic wine, especially with the niabell grape. Almost simulates the finish of wine in your mouth. Come to think of it, wondering if this was the experience he was trying to reproduce from a food perspective. Like “this is how it tastes to eat wine”. Reference to Napa Valley? You will see the California references grow as the blog post grows.

This chef is very cerebral. Not sure if I’m projecting too much into these concepts, but this is full-blown young, almost annoyingly hyper molecularized hipster chef, with environmentally sustainable Noma-esque, veggie centric theme to the max. Not that there is anything wrong with that, but the message is not subtle.

As soon as we think to ourselves, “are we supposed to think about the food or taste it?”, he hits you with an uppercut of luxury high-end decadence of egg yolk with caviar. Granted it’s California sturgeon caviar, not Osetra, but nevertheless lovingly perched atop an almost barely soft boiled egg yolk with enough surface tension to hold the caviar scoop, on a bed of creme fraiche with chive. Again, pairing the CA caviar with the markedly French Krug “Grand Cuvee” with a nod to the two most French ways to eat your caviar in, on a blini with creme fraiche and chive, or conversely caviar with scrambled egg, but dupliciotously using the egg yolk visually as a blini. 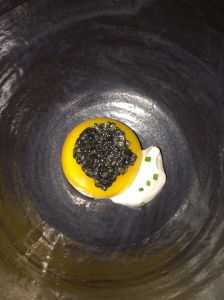 Then the first main dish, Seared Spot Prawn. In my opinion, California’s most prized jewel offering to the rest of the world; Santa Barbara Spot Prawn was cooked with new onion and sorrel, which gave it a sour apple flavor profile, balanced by the umami-ed sweet caramelized onion. The vegetable point/counterpoint was married seamlessly to the brininess yet sweetness of the spot prawn, nicely paired with the minerality of the 2009 Felsenberg Riesling. This was the first dish I did not feel that there was a California product over-compensating to compete with a French or Japanese based expectation. Come to think of it, maybe there is another environmentally hidden message he is conveying visually, where the Santa Barbara spot prawn is swimming atop the recent California oil spill, addressing another CA themed environmentalist critique. Or maybe I am taking too much artistic license in my projective sorrel-blot observations? 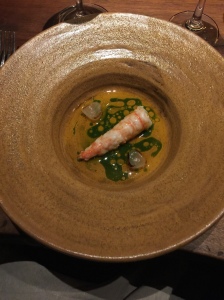 Then back to something very Californian, goat cheese and beet. Like nouvelle California cuisine from the 70’s-90’s with the requisite parmesan crips. This guy loves beets. He was making little beet flowers on Mind of a Chef with David Chang. He called this the inverted beet/goat cheese tart. Inverted because this is how they look when they are underground we assumed. We love how he titles his dishes, food for thought, pardon the pun. 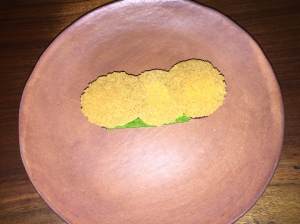 It’s like we had recess after Chemistry class and then started Botany class and instead of learning about transitioning states of matter, learned about the various strata of the earth.

Then came more farmer’s market fare with the Chilled Early Girl Tomato-Pepper Soup with pole and shelling beans and flowering cilantro. I must say, the color on this soup was beautifully iridescent. It was perfectly chilled; high-end V8. Looks like a Picasso profile of an actual tomato, this guy is a genius.

Finally some protein amid the vegetation. Trout wrapped in Yuba with charred cabbage and dried scallop-ginger sauce. Perfectly sequenced dish after the chilled tomato soup, provided a nice pond in my stomach for the trout to swim in. Yuba is the outer skin of tofu. Almost like the concept of a salmon skin hand roll where the fish skin is surrounded by seaweed wrapping, in this case, Yuma. This dish reminded me of the final dinner we had in Kyoto where the chef creates a visual landscape with the cabbage recreating the currents of a babbling brook where the trout are swimming upstream. Again, he slaps you in the face again with what seems to look like pork belly, but is actually tofu skin and fish, almost like he is making a mockery of the fad carnivorous lust that runs through the heart of fine dining these days with such dishes as foie gras, blue fin tuna toro, or pork belly, but instead using sustainable ingredients, and trout, which is ubiquitous in CA rivers. 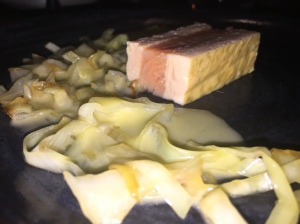 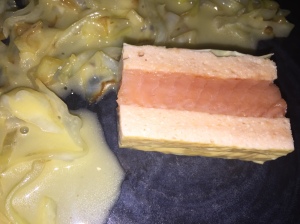 The tomato soup and fish dish brought with it the white Burgundy. 2007 1er Cru Chassagne-Montrachet which also carried us through to the Matsutake mushroom dish which welcomed in the 01 La Rioja Alta ‘Gran Reserva 890’. We love matsutake and have been munching on this since Sept at many LA restaurants, but sadly we may be at the tail end of the season for this, which ends this week. This version came in a potato-pine needle puree. Talk about some effervescent mashed potato, what a novel concept, pureed pine needle. I just thought CA redwood forest when I was eating this. 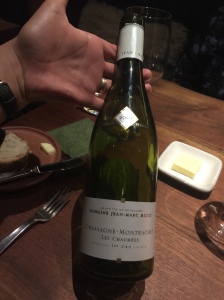 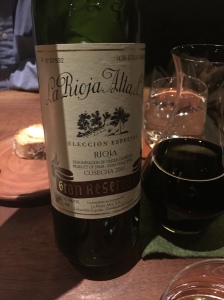 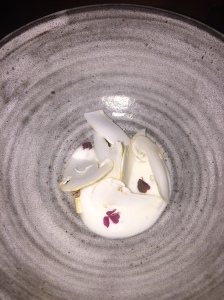 As we ate our way through this meal we made friends with our solo foodie friend, Lisa, sitting next to us, whom we thought was an under cover Michelin taster, given her intense note taking through out the meal. She had the restaurant resume to rival the pansionistas, especially all the top 50 restaurants in Asia and the world that we shared anecdotes about.

Next up was the beef encrusted in seaweed served with cauliflower and parsley puree. Nice molecular interpretation of the parsley garnish, yet this garnish is edible, win for sustainability once again. Very interesting, reminded me of the sous vide tenderloin we had at Narisawa, which had ash covering instead of sea weed. The surf and turf combo here provided yet another clever psychological dissonance as your brain does not expect the skin of a cow to be covered by an almost fish flavored and textured skin. Like a game of rock, paper, scissors, with the paper (seaweed) winning over the rock (steak) once again. 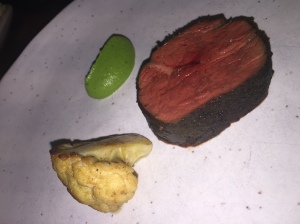 I do have to say that though I did not get my carnivorous lust satiated so far, the desserts shined like no other with regards to not leaving you with that heavy post-prandial coma feeling. The fresh produce really came through on the desserts in the best way possible. I still remember that raw dough taste of the coconut mochi taco wrapping a kiwi and shisho leaf. So ridiculously amazing. All I could think of here was the Asian Mexican fusion theme represented in California with the whole concept of Kogi trucks, etc. It’s almost like he is visually showing you California in his food, very clever. Never seen this concept so clearly laid out in this way at other restaurants, maybe at EMP (Eleven Madison Park), but it was more gimmicky there. 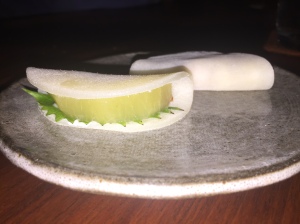 Round two dessert was the frozen whipped strawberry with the sorghum and anise herbs, paired excellently with 06 Jura wine from France. This was the pairing of the night. First of all, we love Jura and lament that it is not as readily available in the US. The barnyard yeasty fermentation that makes Jura what it is, so perfectly compliments the fresh strawberry. It’s like the soil that the strawberry is plucked out of is represented by the Jura and the dirty yeasty flavor that it brings. Look at that purple sorghum version of grape nuts underneath. Again, this is a Whole Foods gluten-free reference to sorghum, which is a grain that people who are usually gluten intolerant can tolerate. It actually serves a more appropriate purpose in this dish because sorghum is higher in sugar content than wheat. 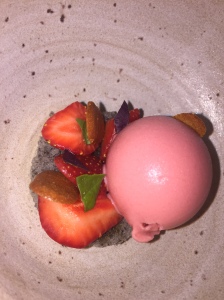 The final dessert was the most visually stunning of all the dishes actually, Vanilla poached pear, with black pepper, pistachio, raspberry, and red-wine sauce. This looked like one of the main courses, such amazing contrast, and blood-red raspberry color. It was so pleasurable to eat this, with the foie gras textured poached pear, with the classic French biscuit atop the poached pear, but again with CA theme of pistachios. I’m still dialoguing with Erika if it is just us, as Californian’s who see this theme or if it is just a coincidence and we are reading too much into things.

This is a meal that is even more appreciated the more you think about the thought that went into the themes, but yet it was not a gimmicky theme. It was almost like a novel about California, visual storytelling with lots of metaphor and interpretation. Not to mention how the flavor does the talking, but the food even made references to the whole idea of Nouvelle California cuisine that started at Chez Panisse in Berkely in the ’70s, possibly tied in the Mexican migrant story of the fruit basket of the US which we call Bakersfield. Also tying in the heavy Asian influences in California and how Mexican and Asian fusion has developed as a result. References to the whole foie gras controversy in California and sustainability, throwing the concept of high-end dining and fads such as pork belly, caviar, foie gras and endangered fish on their heads. Again, am I crazy and did I make all these associations up, or is the chef trying to show out of state visitors the story of California? Maybe the truth is somewhere in between? 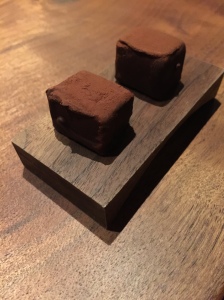