I monopolized Erika’s business trip to knock out several Michelin dinners in Chicago, and boy was this a good place to start. First of all, we love going to a place like this on a Tuesday night. There were only three other parties there and it felt as though we rented out the entire restaurant, and service was impeccable.

To start was some frozen red ace beets, granny smith apple consomme and raspberry. This was paired with a ’14 donnhoff riesling. Refreshing palate cleanser, tartness paired great with the minerality of the wine. 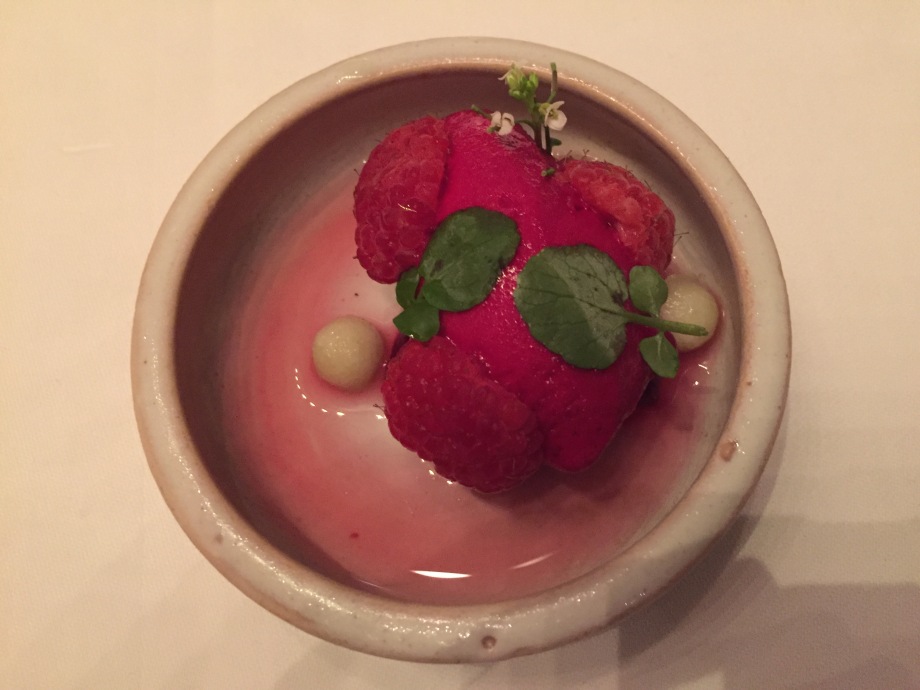 Next up was the farm egg with alba white truffle and new england maple. Similar to Providence’s uni inside farm egg. Again, pleasing combo of white truffle with egg, can’t go wrong with that classic combo. It was like the Providence egg, but combined with the foie gras biscuit at Animal, with regards to the maple influence. Erika loved the maple, but I thought it overpowered the white truffle a bit. Still we loved the sweet with the savory. The demi-sec champagne was starkly dry and mineral in contrast, so it did not get in the way of the sweetness of the maple, but rather provided a nice counterpoint.

Drifting abalone and ginger bouillon. Truly was drifting in the broth, and though the abalone was tender, the flavor left me hanging. I had to read the menu to identify what protein I was eating as it was unrecognizable by taste. The broth was like a lemongrass flavor, nice approach to abalone, as we had it many other ways in Japan, not in a soup. Visuals were nice however.

Golden tile fish, banyuls plus brown butter gastrique radish. I think a gastrique is a reduction of  vinegar and brown sugar, butter, as well as Banyul, which is a port-styled French wine. The radish, which I think was fermented, and Banyuls gave it a funky/earthy umami that was amazing. It almost tasted like a borgognon gravy. It really started the main course portion off with substance, a heavy and savory suace with a mild flavored tilefish with a flakey/firm consistency, similar to John Dory or Skate. We love discovering fish varieties that are not on verge of extinction and not yet so popular that it is causing their future reserves to be depleted. In this way we are pro-conservation, not exactly bending over backwards to accomodate animal rights activists, but having an equally tasty alternative to prevent overconsumption of the popular stuff. If you don’t want to serve blue fin or sea bass, show me alternatives that taste as good, if not better. Maybe people will gravitate to other lesser known fish varieties of they are exposed to it. Nicely paired with a subtley sweet ’12 gewurztaminer alsace to contrast the super savoriness of sauce. Again, this place was very Providence-esque with seafood focus, white pairings and a French-Japanese fusion vibe.

Cervena Venison with butternut squash confit and sage. The kumbota like quality of the squash with toasted pumpkin seed with the charred sage added a nice fall time smokiness, thanksgiving-ish walk through the forest of the northeast terroir. The venison was good, tender, typical sous vide cooked protein, muted compared to the accompaniments we thought. So Cervena Venison is a free range and grass fed deer with rigorous criteria for packaging and shipping and is naturally amazingly tender. Which is why I was disappointed that it was prepared this way. Honestly they would have knocked it out the park if it was flame seared and served rare. It would have melded so well with the side items described above. It was nicely paired with a ’12 Bandol, which is a Provance wine that is a lighter red, almost rose like that was a nice transition from the whites into heavier juice to come. 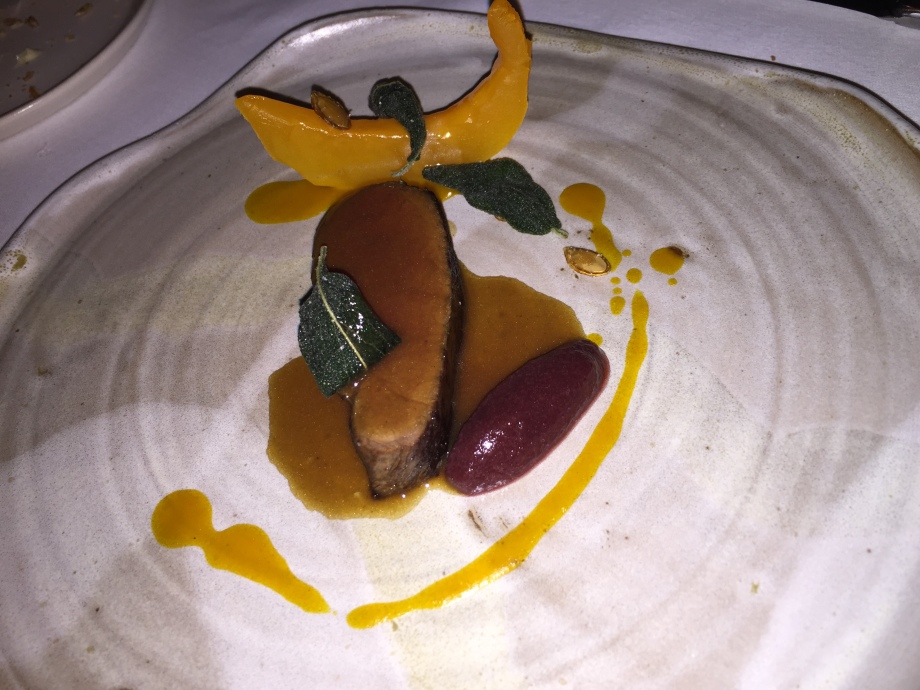 Next up Kobe beef, carolina golden rice, and umeboshi. Everywhere we go now, Carolina golden rice is like the crown jewel of an authentic American staple that is making lots of waves in gastronomy and popping up in most of all the last five Michelin restaurants we’ve been to.  Also amazing was the umeboshi. So Ume is Japanese plum, boshi is when they pickle it. Just think tamarindo paste, sour Lucas plum, paired with the smokey sweet Kobe and creamy Carolina golden rice. To top it off, ’09 Brunello di Montalcino, demonstrating why they are a Wine Spectator Grand Award winner. This dished killed it, and the pairing was nuts. We were left hanging though after this apex, as this was a shorter menu than most places, and we went straight into dessert after this. Only complaint was that we wanted more kobe beef, but it looked like they prepared it shabu style with the rice, thinner cut, on top of the rice.

Frozen cider, black walnut to start the desserts. I think it was like a slushy of pear cider with a black walnut liqeur type reduction. Like a fancy rootbeer float. Very malty in flavor. Our palate was cleansed after the kobe entree with this camomile tea like palate cleanser before the frozen cider came out. 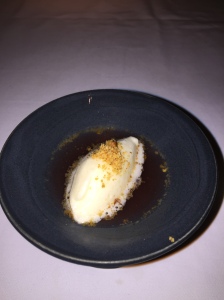 Then another amazing pairing that I had to take a picture of the bottle for. This knocked out socks off. We also had this at Grace the next day and since I was raving about this pear cider so much they gifted me a bottle of this. I am waiting for the right ocassion to share this bottle. I know people poo-poo ciders as a hipster phenom, but this was so good, fermented and earthy, omg. Paired so well with the dessert as well as the cheese plate.

I was so drunk at this point, could not remember to write down the cheese selection, we really liked the reddish one, as it had the texture of corn bread almost, coated with paprika, super smokey. Then Erika’s dessert was this pretty little nest called nesting raspberries, clover honey mouse and oxalis, which is like an edible four leaf clover. It reminded me of the middle eastern dish of Kunefe, which is sweet hot cheese over shredded wheat. This was great with the play of the different soft and crunchy textures, but mild in flavor profile compared to the last dessert course to come. 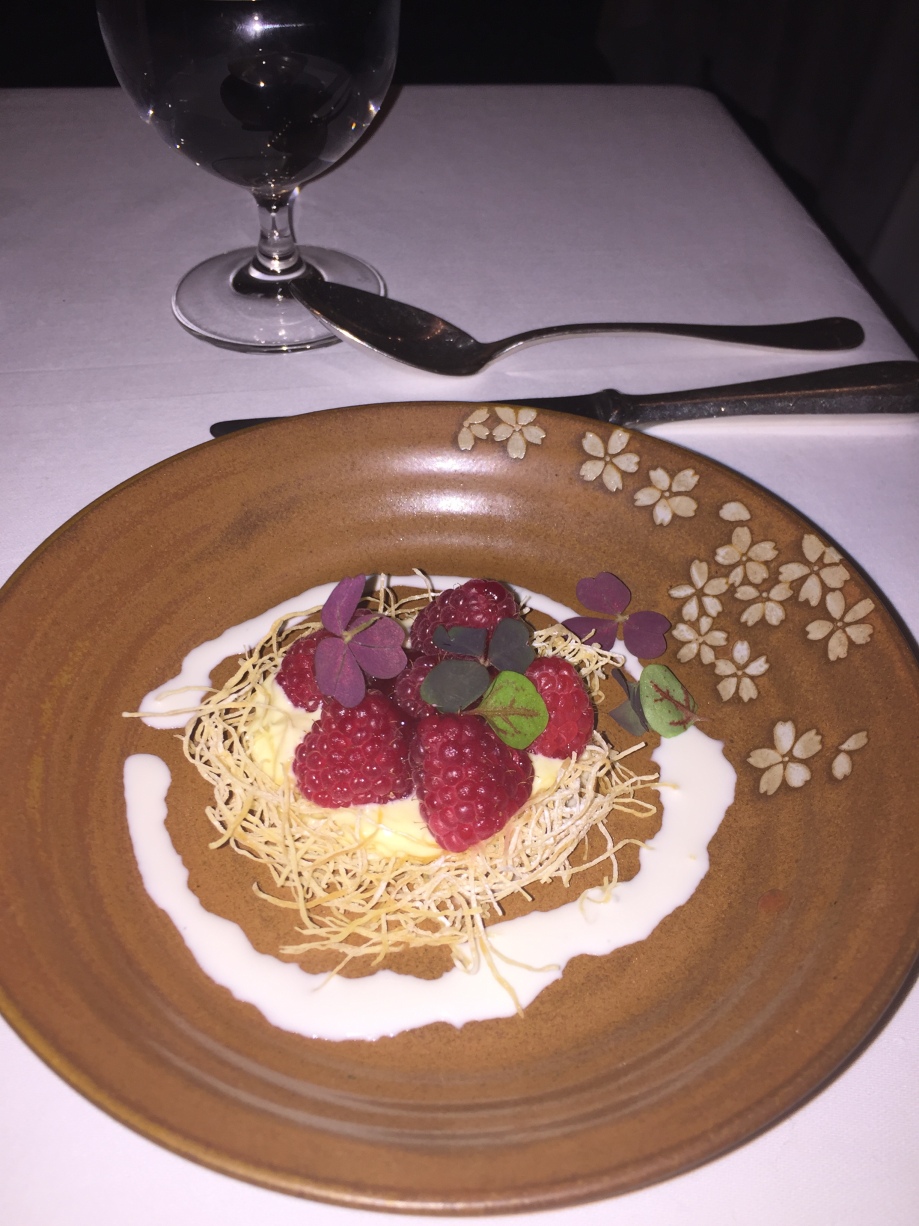 Yellow sweet corn, blueberry compote, very cold popped corn. This stole the show, despite the overdone theatrics of liquid nitrogen pouring out onto the table, the flavors in this dish made our taste buds pop. It was so delicious, and left us with an initial punch to our face, the room is spinning moment, when we took the first bite. I don’t know why sweet corn is not an ice cream flavor, it is the definition of sweet and savory, you don’t even have to manipulate it that much.

Then my favorite amuse bouche parting gift, canele. Please see previous posts on how I wax and wane about this Bordelais dessert. Also came with chocolate truffle and jelly selection, and finally ending with a ball of chocolate with a liquid inside. For the life of me I can’t remember what was inside the chocolate sphere, but it was really good, and we asked for more. It was really cold on the outside, and the liquor/whiskey just burned my throat going down. 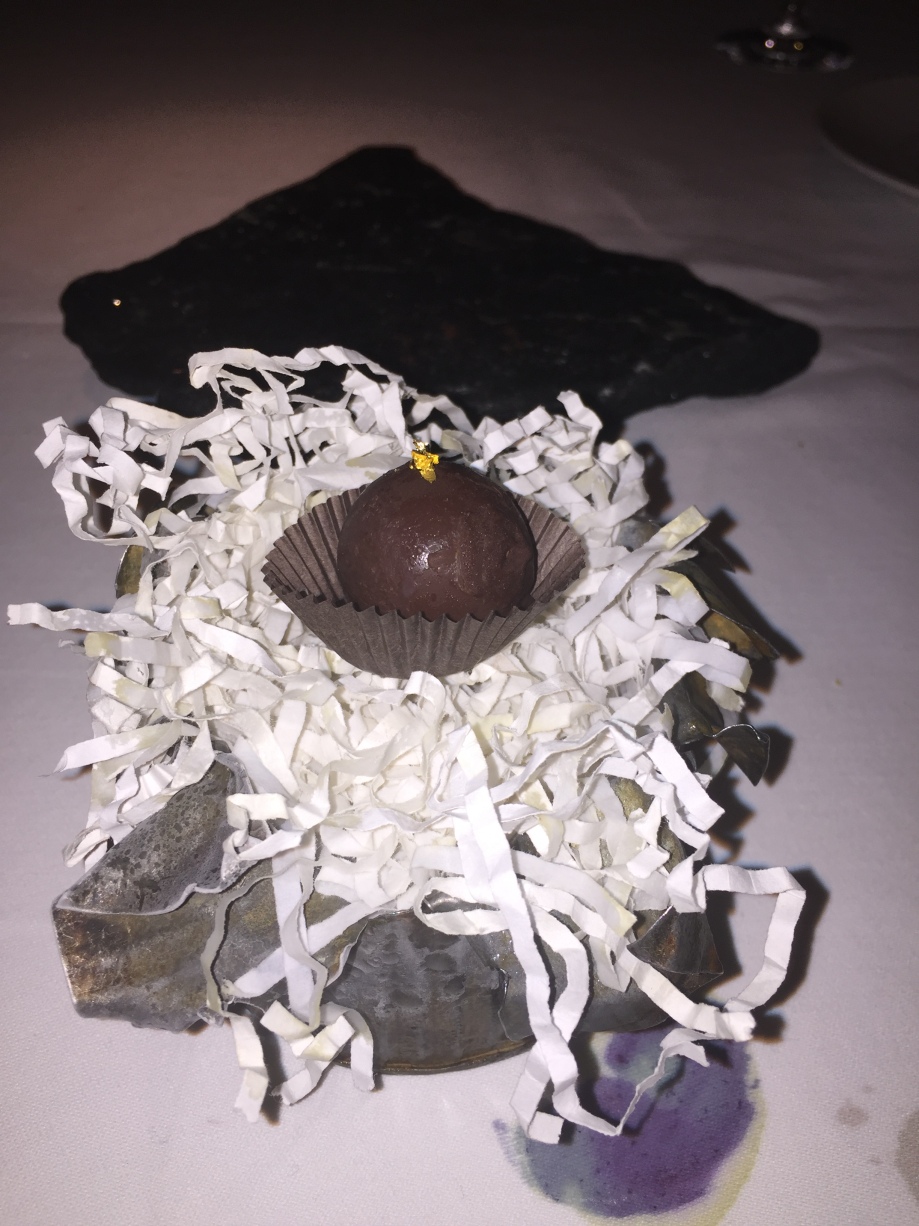 Took a photo of their duck press on the way out.

Overall, solid 2 stars. Nothing overly creative, or not seen at other places, but the quality of the ingredients, amazingness of the wine pairings, and consistency of goodness through every dish leads to a reliable go to spot if you don’t want to be disappointed.