So, back in like 2012, when I first started traveling and getting obsessed about food and morphing into a gastronaut, I somehow came across this magazine called Apicius, which highlighted these obscure restaurants and went into a deep dive discussion with long articles about the region of interest, etc. In one of the magazines, I saw an article on Chef Corrado in Sicily highlighting Cafe Sicilia. I was fascinated that there was this level of molecular sophistication in Sicily. I always imagined Sicily to be a tourist trap kind of place that Bourdain jokes about in his show where everyone is trying to hustle you into taking some Godfather tour. This article was the seed that was planted in my head that spawned this entire idea of going to Sicily. I remember 2 years later in 2014, emailing my cousin and saying the amount of research I do on Sicily will earn me a Ph.D., and this email was back in 2014.

I was fascinated by the map of Sicily and the geography and botany lesson that was covered in this article. I guess it appealed to my affinity for attention to detail as a physician. It looked like one of my lecture notes from medical school. 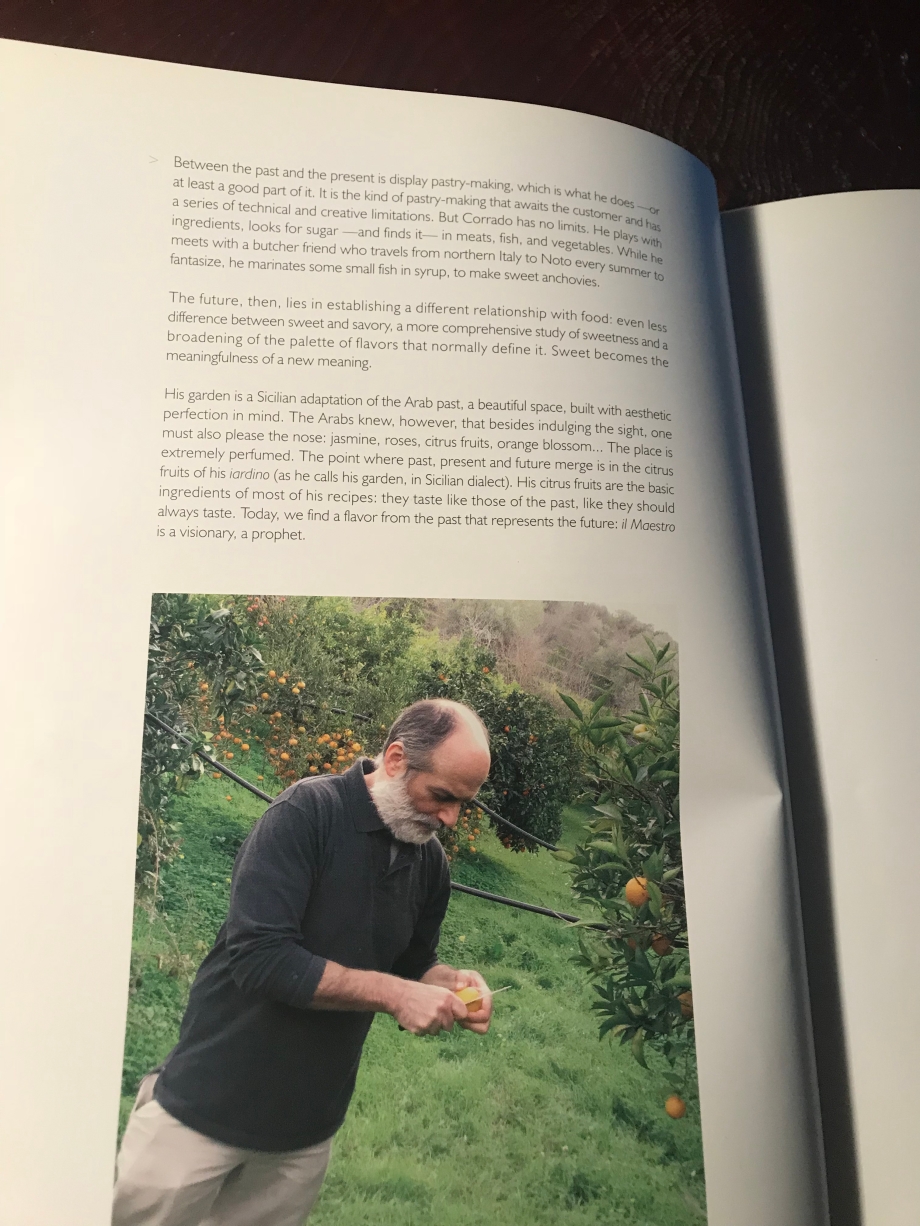 I was fascinated by the anthropological description of his garden, conjured up images of the Golden period of enlightenment with the Moors and the hybridization of the cultures of Spain and Italy and their common crossroads.

Forget the phrase ‘comparing apples to oranges’, this article reframed this to ‘comparing oranges to oranges’. I never knew the crazy variations in citrus fruit, again, made possible due to the cross-pollination of cultures, the unique latitude and weather phenomena of the terroir of Sicily.

If you want to get your hands on this magazine, I highly recommend it. It costs like $65 per magazine, but it is some serious high-brow reading that blows your mind. This was from the 2nd volume from their American collection. Their website is http://www.apiciususa.com

Better than any research I have done online. I have discovered many other restaurants through them. Here I am, giving away the trade secrets to my travel research.

At the time this place piqued my interest, this was the only online mention of this place, he just had a facebook page:

I reviewed my old emails, and in numerous emails, my cousin would say, “Ya, one day.” “It would be nice once we find the time.” “Maybe in the future. ” It’s funny how that ‘one day’ finally comes, and all the years of discussion unfold into reality. Now as I sit here and write this reviewing all the restaurants we went to and the places we saw in Sicily, I see how thoughts lead to emotions, which lead to actions. Anecdotally, this is the same explanation I give to my patients about how CBT works. To top it all off, I see Corrado’s shop being highlighted on Netflix with Chef’s Table 3 months before I start this blog post. Talk about coming full circle.

Here is another article on Eater:

Ok, enough academic sycophantism, let’s set the scene here for the beginnings of our journey from Ortigia, Siracusa to Noto for one of our stops at Cafe Sicilia. I highly recommend you use this service so you can be scurried around in a nice luxury AC equipped van as you get shit faced from town to town.

Child labor is still alive and well in Sicily. I could not believe a child was playing at this level of expertise. “Tip me or I put Gypsy curse on you and call my brother Bilo.”

Sorry, I just can’t help myself, I see Gypsies and my brain just floods with Borat jokes.

Highly recommend staying in a hotel or Airbnb inside the walled fortress island of Ortigia. This is the main plaza of that city in Siracusa. You can walk all around to the restaurants and shops from here and it has a much more ancient feeling than if you were to stay in the post-war construction of the outskirts of town.

Nothing like starting the day with an Aperol spritzer and some Peroni. 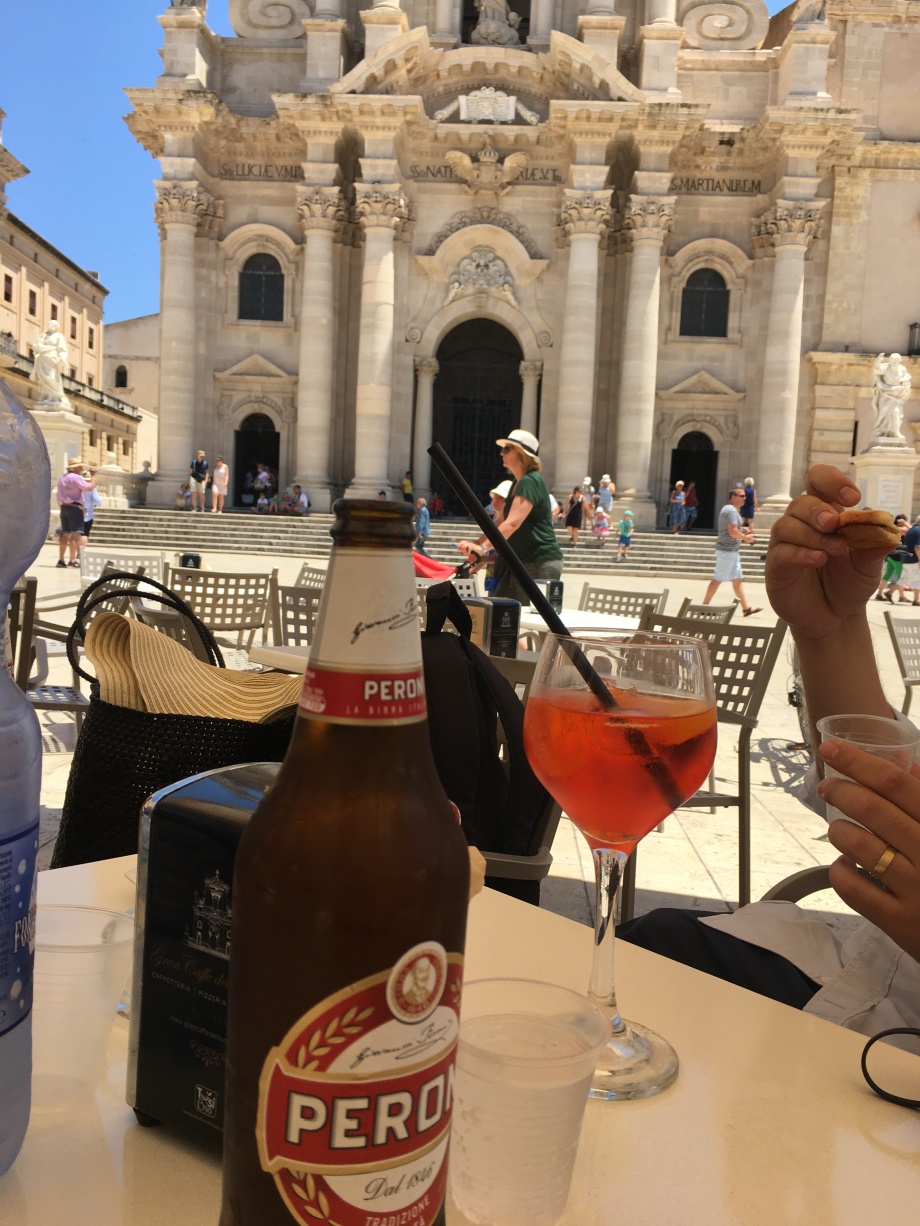 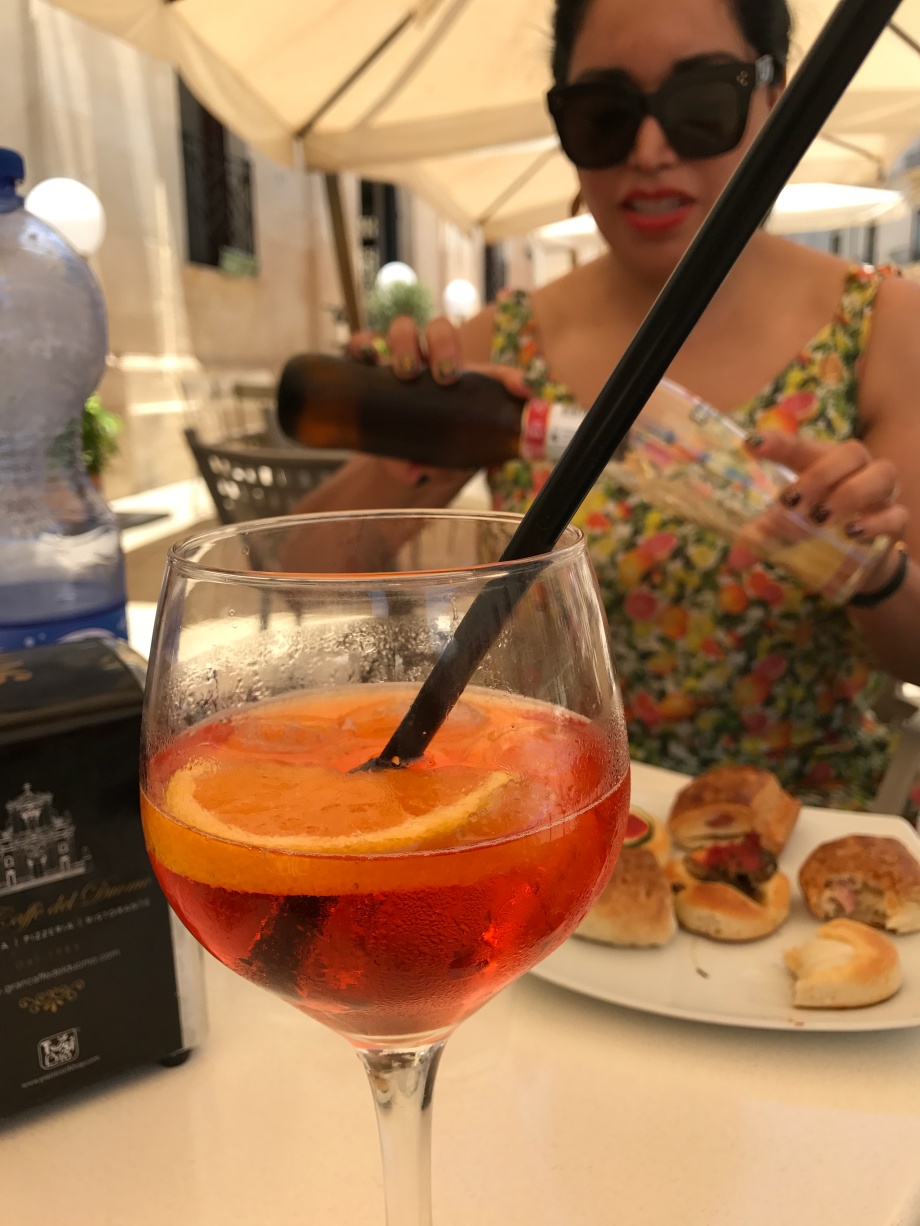 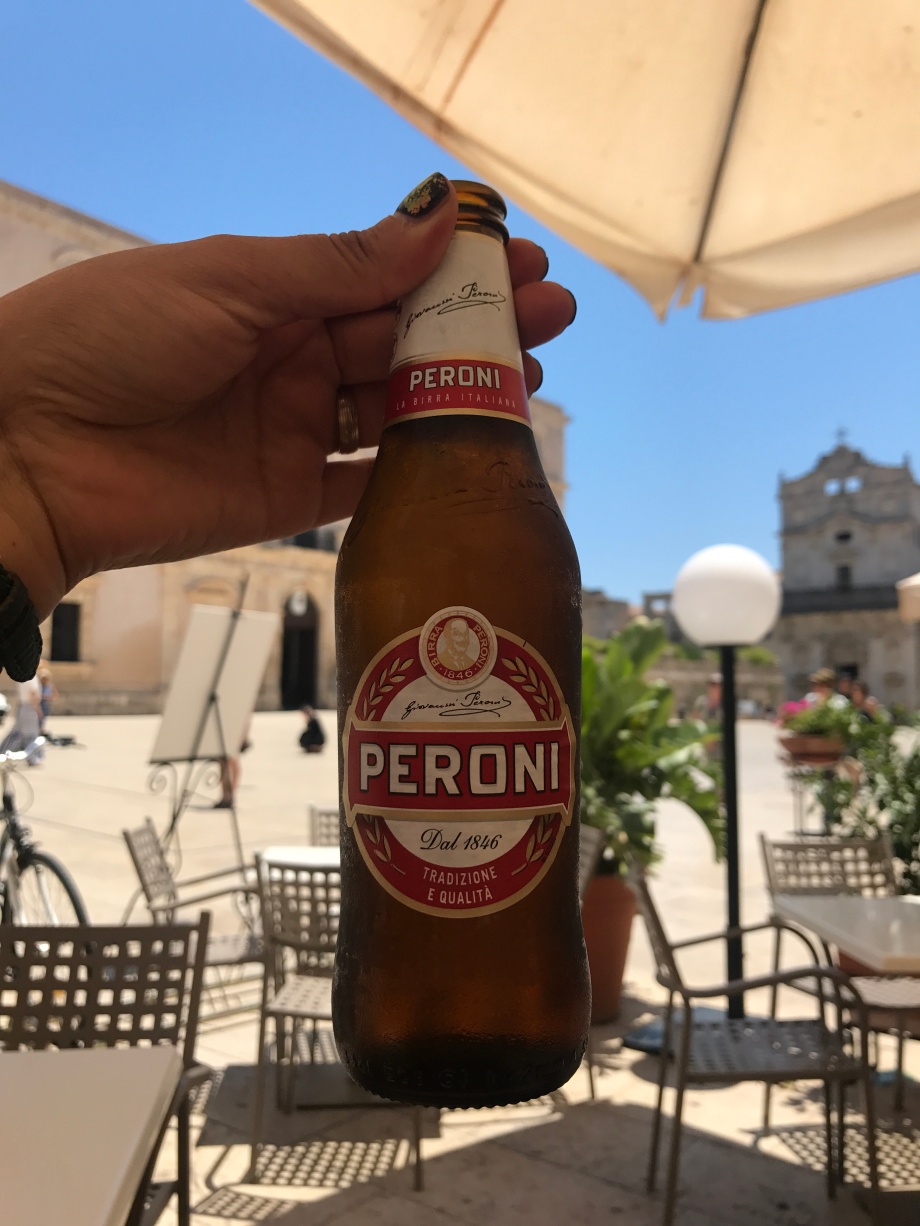 Here’s my cousin living out his Goodfellas fantasy of getting a single razor shave and haircut in Sicily. 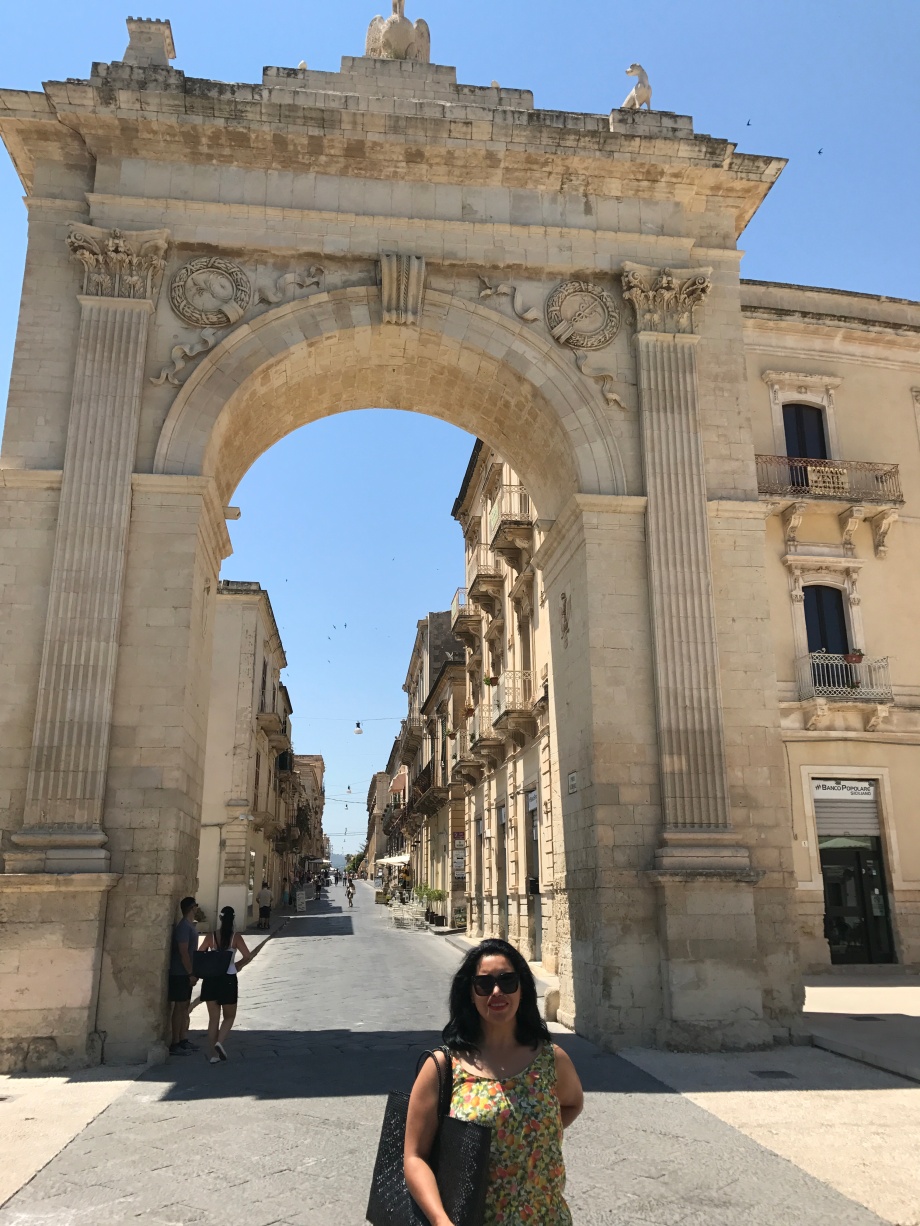 One of the entrances to Ortigia. 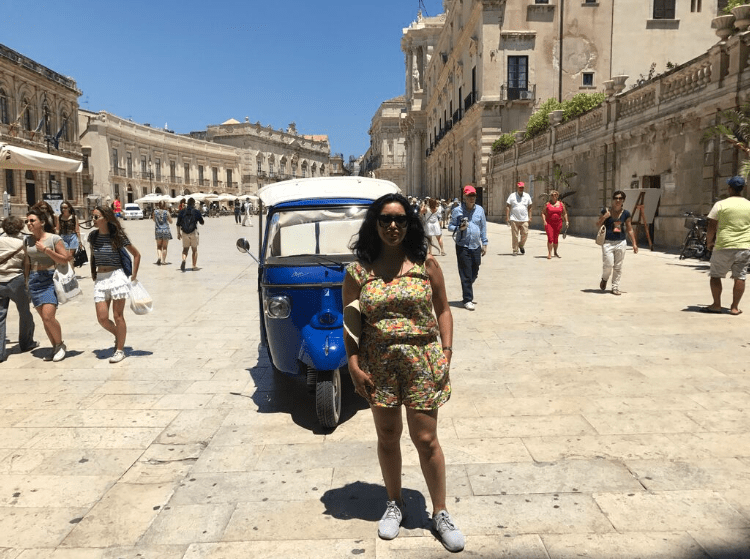 Here is the van we rented through agave travel service, whose info I posted above. This is not a mainstream tourist trap service, rather recommended insider tip, again, from Marvin and Judy Zeidler, owners of Capo in Santa Monica. Very reasonable and you will not regret it once you cover the ground you do without the fatigue and DUI risk. 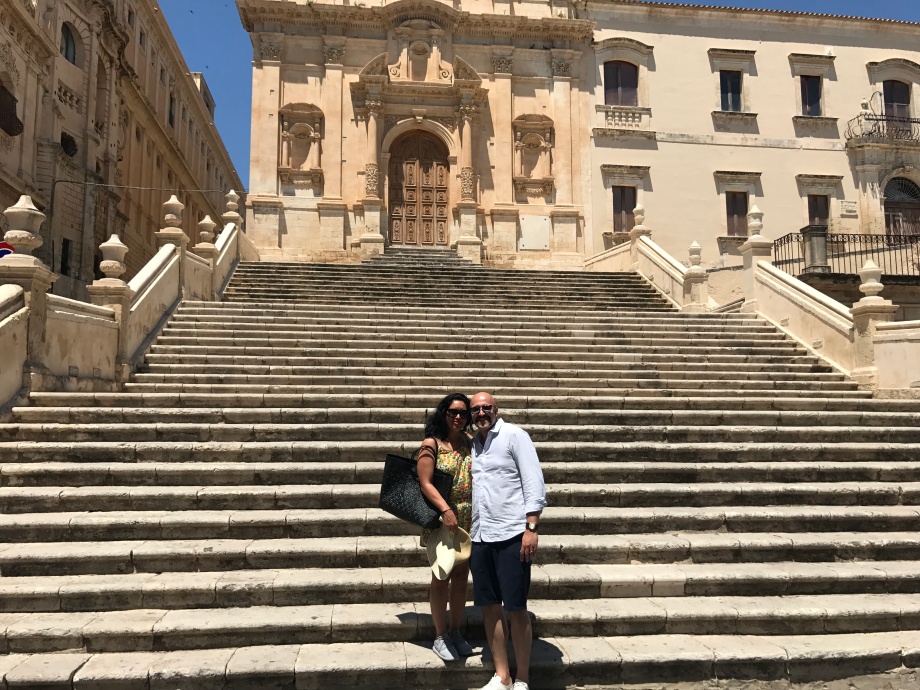 Here we are in Noto, look at their iconic church. Had to imitate the legend Corrado in the picture that started it all.

Amazing chandelier of vials of their syrup. Please read the article in Apicius about the specialness of these syrups. It’s like Renee Redzepi’s lab of fermentation, but the dessert version of this concept of experimentation.

A beautiful door to the side of the cafe. 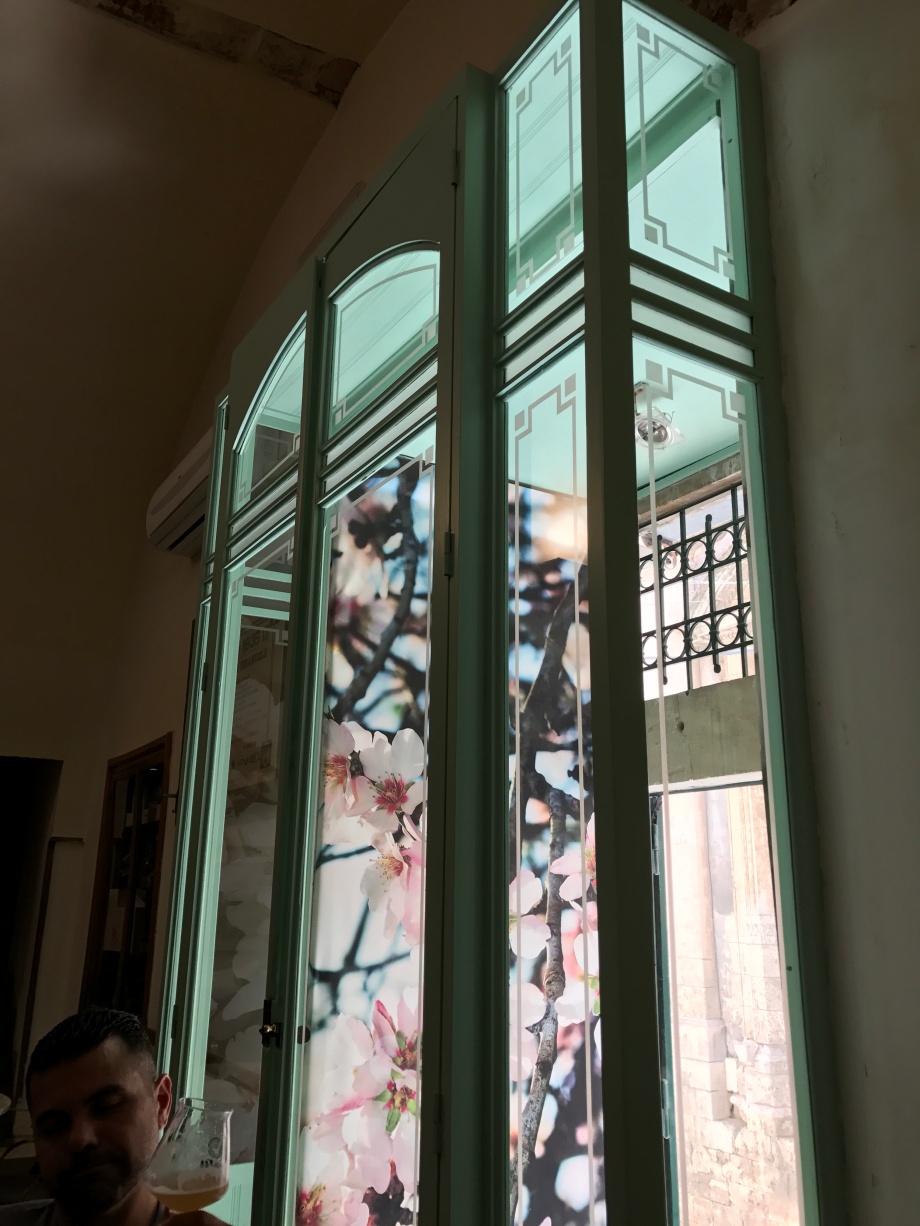 Imitation fruits made from confectionary candy. 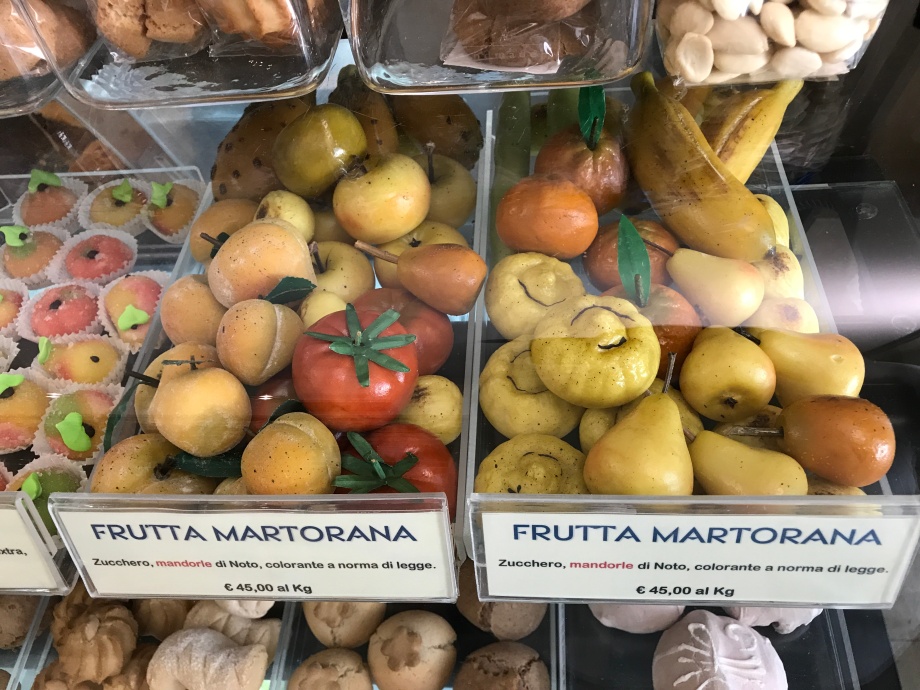 Ridiculous cream puff above. Their famously fluffy brioche, with a light dousing of their syrup. Again, you may think, “I’ve had brioche at better places” but if you read the article in Apicius you learn about how labor intensive his process is even for making the syrup that he douses this in. It was like the perfect version of a baba rum, not diabetic coma sweet, but just right. 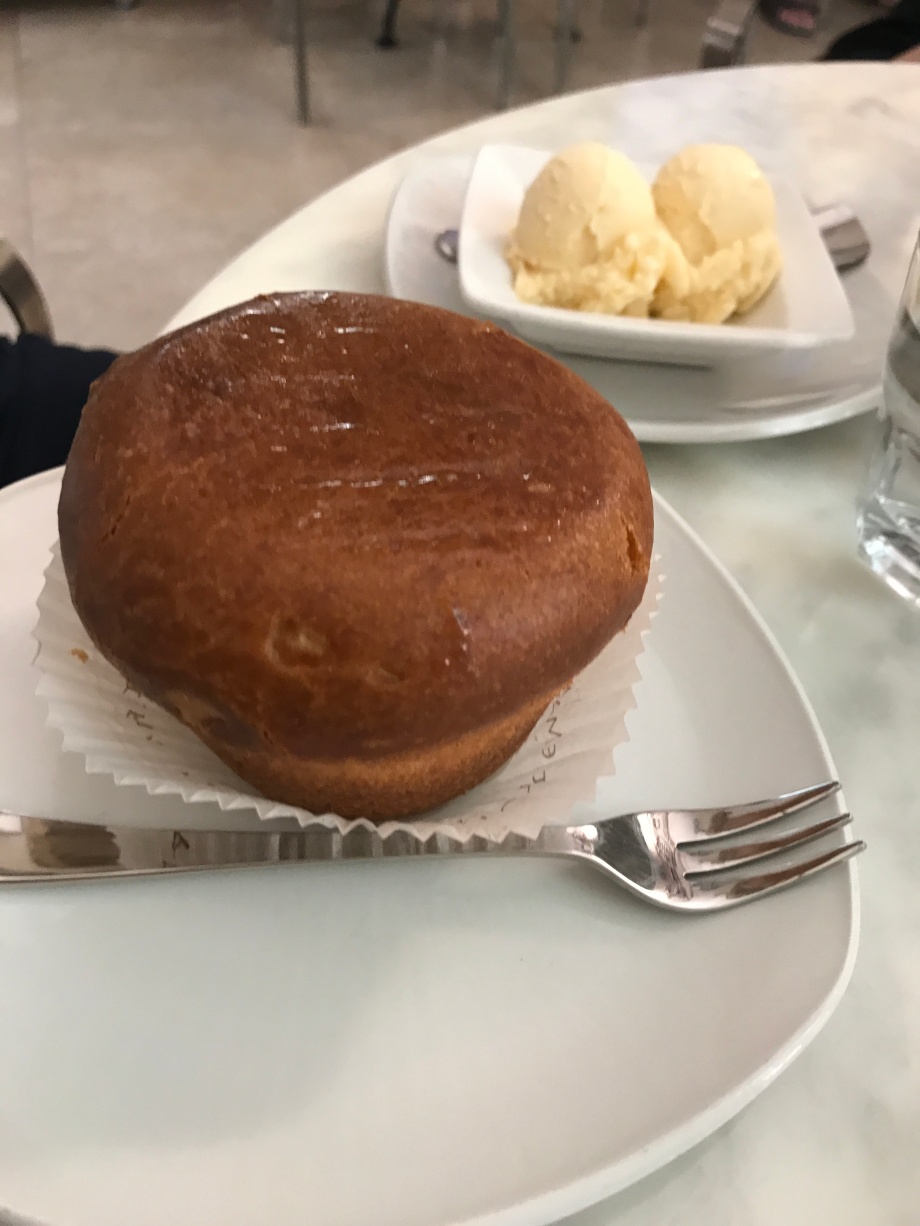 Here is a listing of their gelatos. Don’t be fooled by the simplicity of the flavors. I think in this culture of being flooded by overwhelming amounts of data online, and going to gelato places using yuzu, dragonfruit, and starfruit, we forget the source of the original recipes that started this world-wide gelato craze. Here, you get the original flavors, done painstakingly correctly. Don’t even get me started on their granitas.

It’s 4pm in Italy, that means it is time for an Aperol Spritz.

Wow, the image just says it all. How about one more and some grappa to go along with that.

Thank God we have the van. 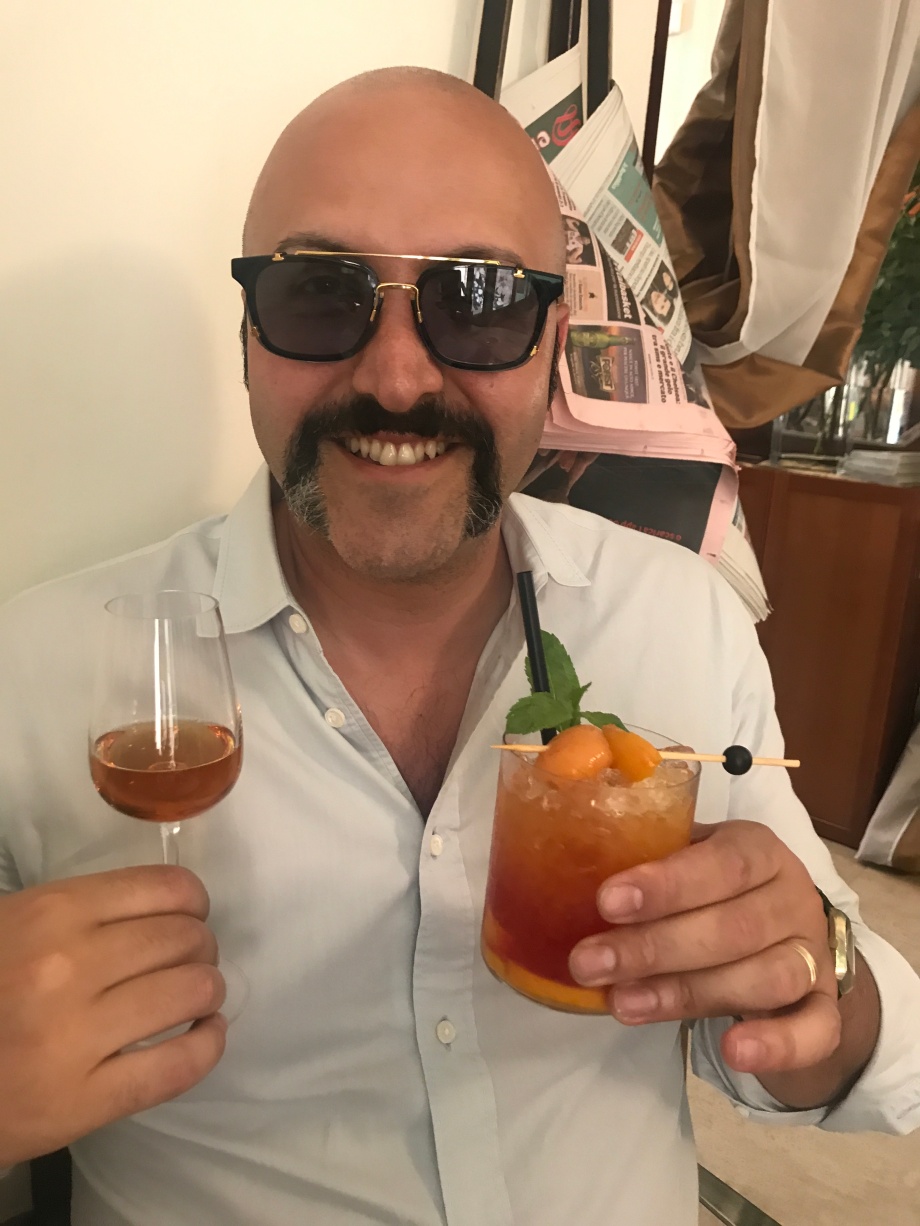 Let’s chase that with some artisanal craft Italian beer.

We had to pace ourselves so as not to ruin dinner, but it was very difficult.

Fagotinni, as opposed to the Fagotelli pasta we had at La Pergola. I wonder if this root word refers to a cavity that gets filled with a cream or buttery explosion of some sort. Again, sorry for my crudeness, this joke was for Al, our dear gay neighbor who has a mind almost as dirty as mine.

Goodbye Noto, off to Modica and Ragusa for more debauchery.