From Syracusa we drove to Licata to try the famed La Madia for lunch before driving to Palermo for the tail end of our Sicily trip.

But along the way is a beautiful town called Caltagirone. If you want to get pottery and ceramic goods, this is the place to stop. The town is full of charm as you can see in these videos.

Just an example of the beautiful scenery you will see on the drive there. 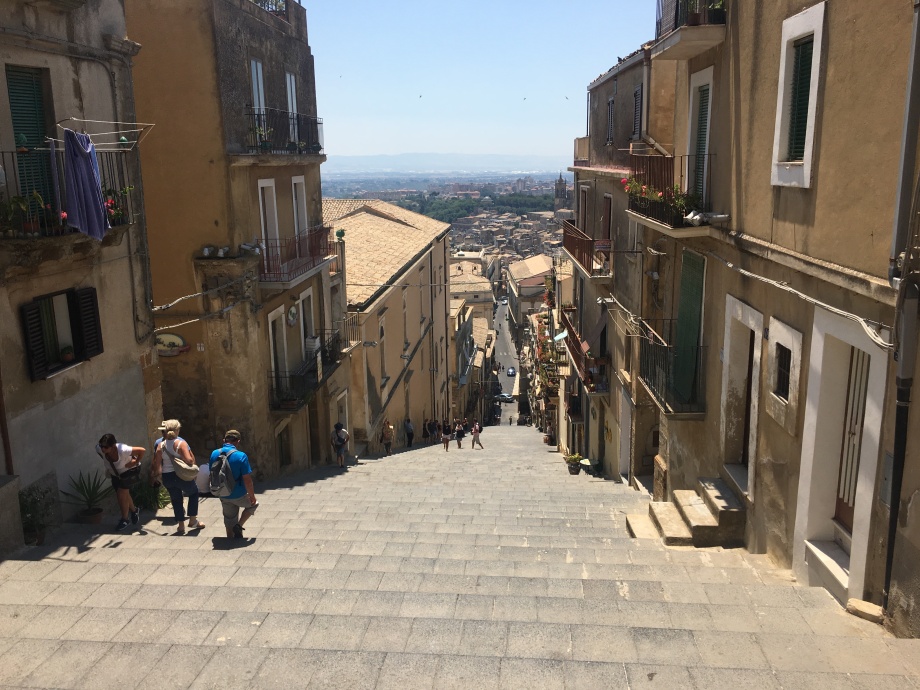 The incredibly long stairs that are notorious in this hillside hideaway.

A random group of old guys singing in a barbershop. You couldn’t pay for something like this. Such a spontaneous surprise.

Then he asks Erika where she is from. He goes straight into a song about Messico. But this next video was the best. Every time I hear it, I am transported to our trip. “Ay, ya, ya, yay, canta no llores..”(Italian version). This should be in an AMEX commercial. Are you listening AMEX Platinum? I’ll be the host.

So as we arrive an hour late for our lunch at La Madia, I am surprised that there are only several other patrons. Let me start this post with a controversial statement. Out of all the restaurants in Italy that I have been to, I have to say if asked which one is my favorite, it would have to be La Madia. There are still many restaurants in Italy I have yet to try, please take this into consideration. Aside from this fact, this statement is coming from someone who has literally eaten his way around the world, and who has been to hundreds of Michelin starred restaurants, half the restaurants on the top 100 list, and have spent 40% of my yearly income at aforementioned restaurants for the past 6 years. 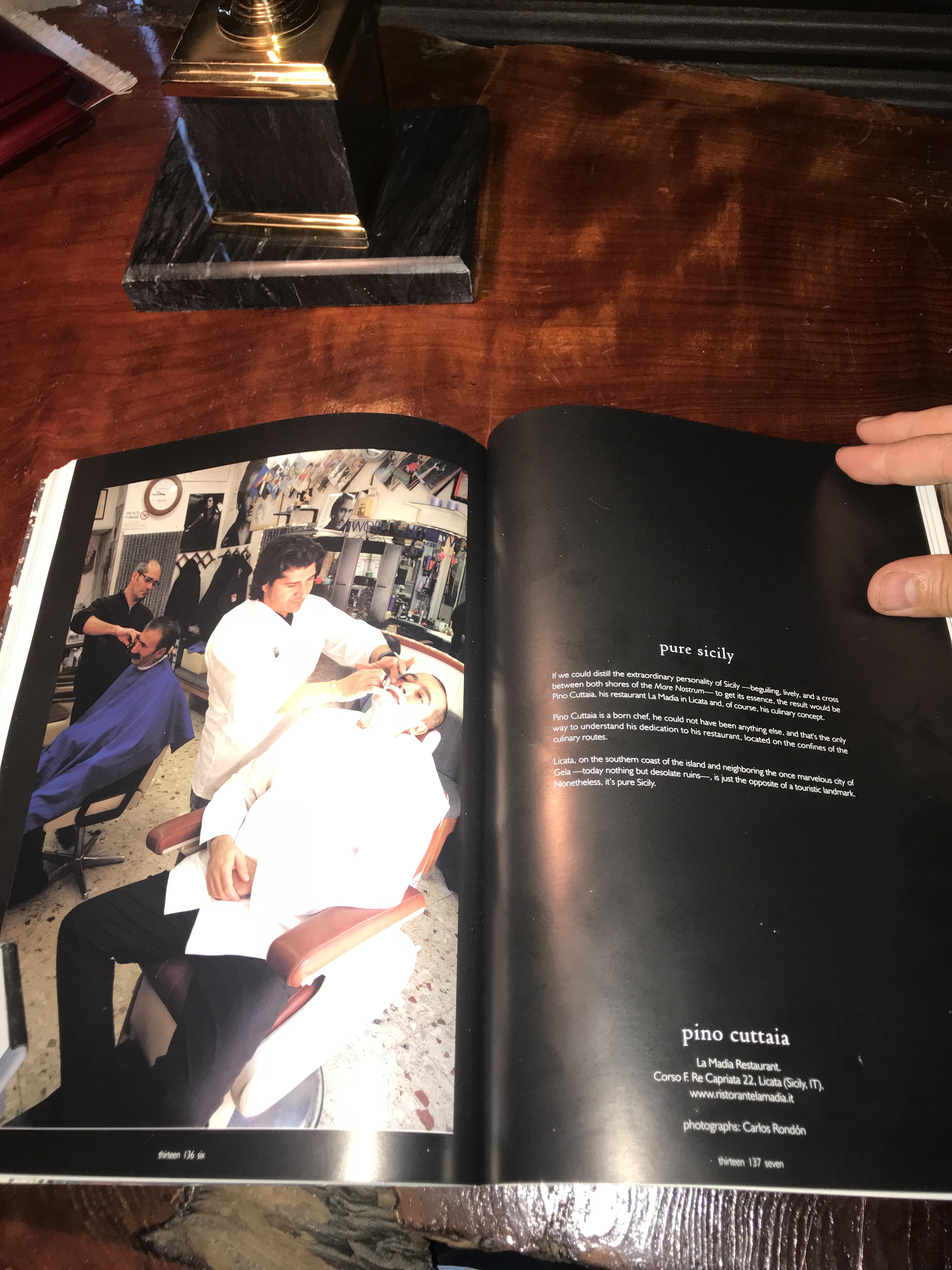 Here is an article on the man himself in the same Apicius magazine I mentioned in my Cafe Sicilia post. It is not so much the appearance of the place, the appearance of the food, or technique of making the food, but the simple fact that chef Pino Cuttaia has distilled the essence of Sicily into his food. That sounds simple but it’s far from it. As the chef stated himself, “Simplicity is the hardest aspect of creation.” I wish we had dinner here, as the lunch was purely spectacular in itself. When we told the host of our Palermo Air BNB that La Madia was our favorite restaurant of the trip, he said, “Of course it is, it IS the BEST restaurant in Italy. No argument, all my chef colleagues agree. You may hear ratings of different restaurants on the Top 50 list, etc, but if you ask a chef, they will tell you Pino in the BEST.” This is coming from a chef who rents his house out on Airbnb as a side gig and has cooking classes out of his industrial restaurant grade kitchen. Again, it might be hard to relay this sentiment through the pictures you are about to see, but the flavors here were truly an epiphany. I still have a vivid memory of taking a bite out of the buffalo mozzarella that is lightly cooked. I closed my eyes and my brain almost exploded. I have never had such as powerful flavor/texture/temperature combination in my life. 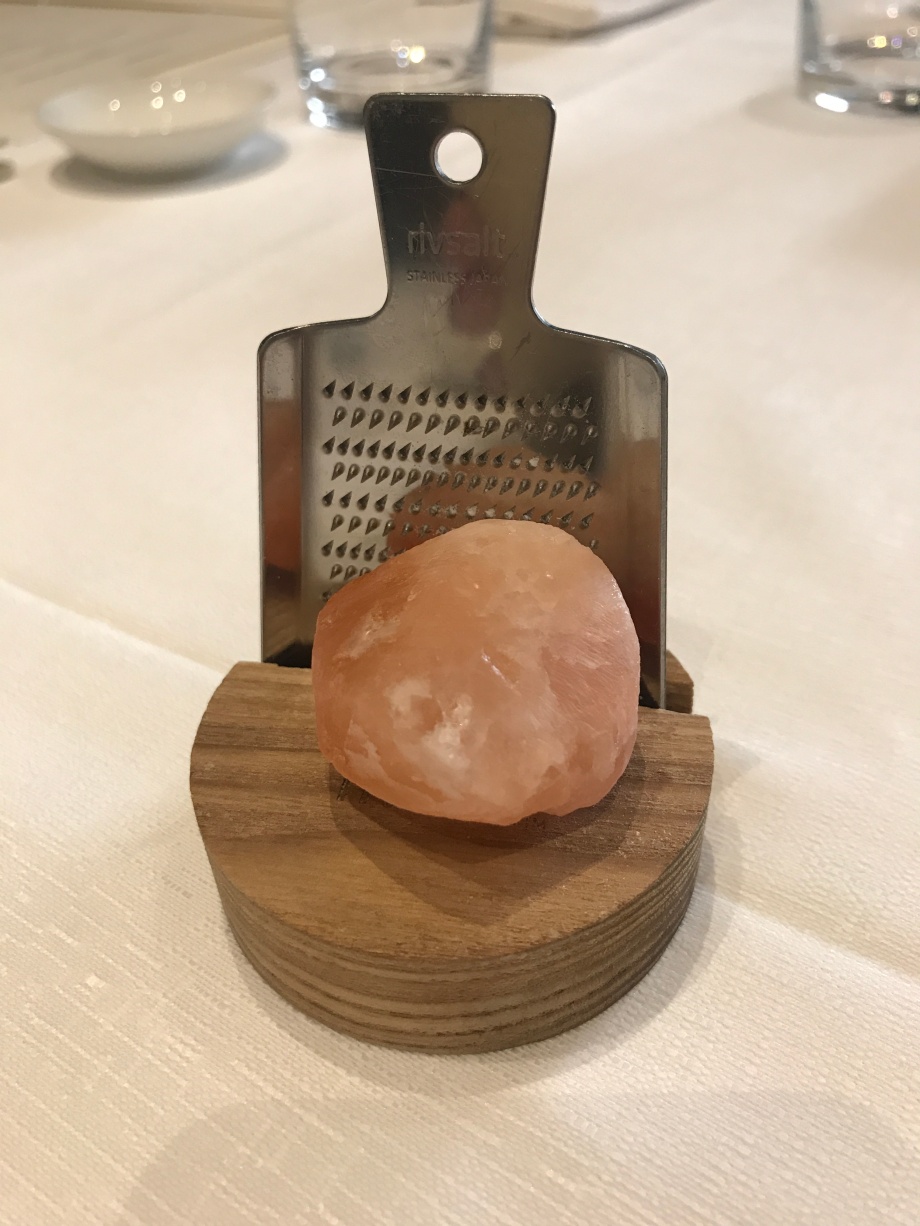 This salt dispenser sits on our dining table to this day.

The flip side of water jug previously shown.

Translates to, “Each of my dishes, with its simplicity, tries to tell a story.” 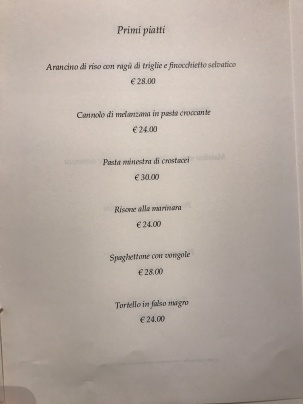 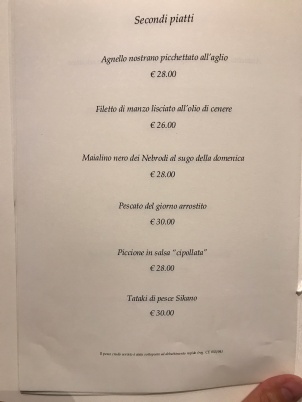 Here are the a la carte menus that we got for lunch as we did not want a 4-hour bonanza, but had I known this was going to be my favorite restaurant of the trip, I would have planned to eat here for dinner and had the tasting menu. With the four of us getting different platters we were nevertheless able to get a good variety of their stand out dishes. 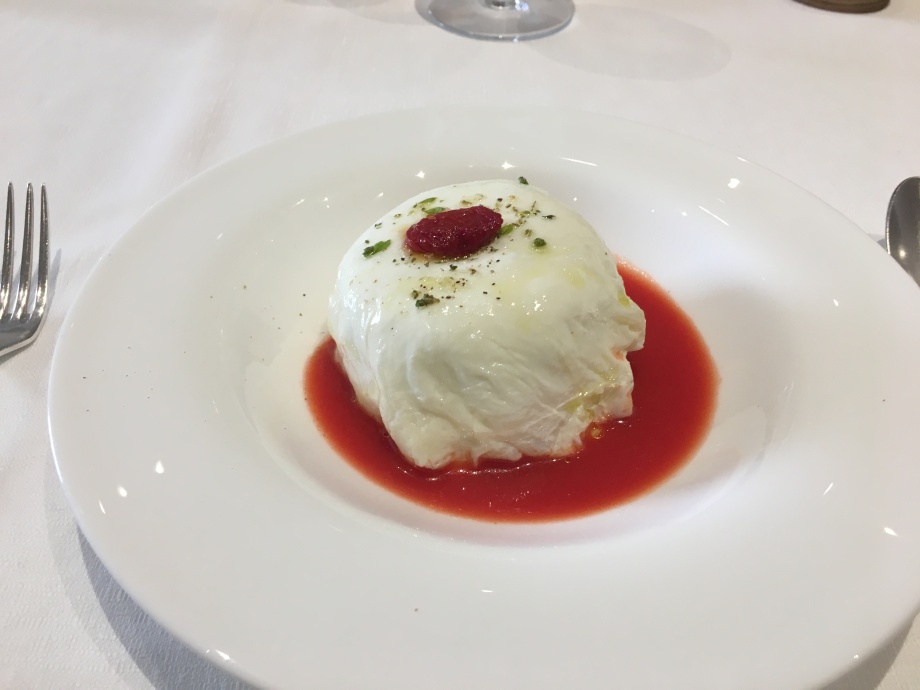 Here is the item of food I will never forget from this trip. If I go back to Sicily, I have to come back to this restaurant just for this. I could have five of these back to back. The best thing I ate on this trip, hands down. Not only was it the very best Mozzarella di Buffalo, it was almost aerated, spongy, evaporated in your mouth, with the purest essence of tomato I have ever tasted. It was not actually an entire mozzarella ball, it was purely deconstructed and reconstructed with an almost evaporative quality. Total sensory trickery here beyond belief. It was like you were eating a cloud.

Here is my friend Stefan describing this dish in his blog:

Then came what looked like an abstract painting. It was definitely a work of art in many ways. Simple ingredients but straightforward in their impact and strong in their flavors. The boldness of the appearance of the dish and the streamline appearance of the anchovy make it look like a bullet with a stream of blood in its path, which is just how you experience the flavor. Like a shot through my heart….

Here is another Italian (Italian-American from Jersey) interpretation of this theme.

This dish was called Risone a la Marinara. Rice with Marinara. It was like a wave of Italian lace doily shaped parmesan with charred anchovies blasted over it flowing over a molten bed of rice saturated with marinara sauce, so potent in the tomato essence of the marinara. Wow! 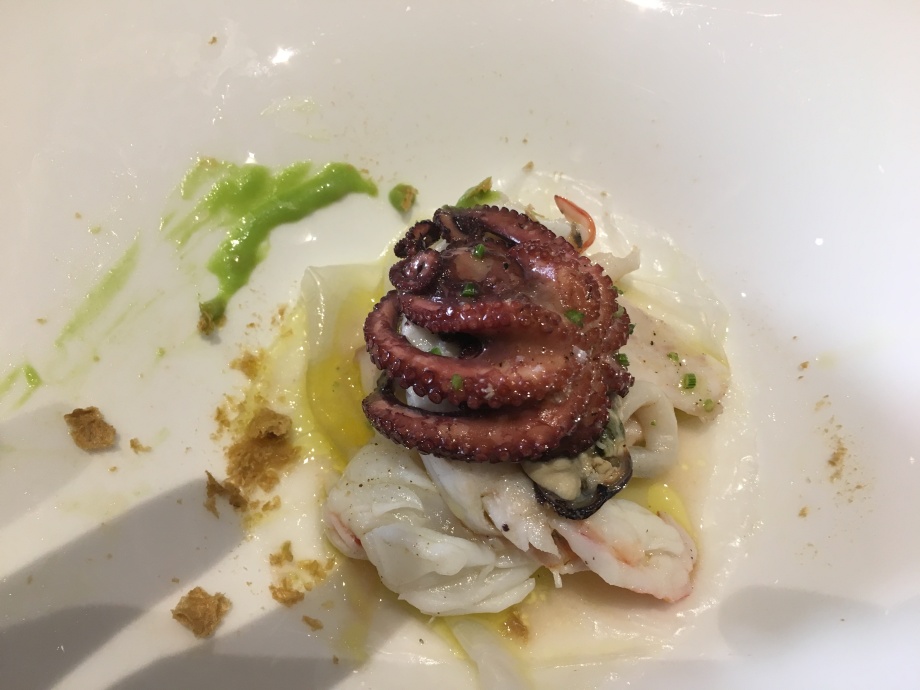 Then their famous shrimp scampi raviolo with sea foam. This was like a giant ravioli of scampi made from squid paste that was cooked in a sous vide machine to coagulate the proteins and then made into a roll of pasta that was then cut to make the translucent ravioli wrapping. With the amazing grilled octopus on top and the olive oil, it just coalesced into one amazing dish. Here is another view before you uncover the octopus. You see the octopus under the translucent ravioli skin the same way you would see the octopus under the foam of ocean water. Magical, child-like wonder strikes you as you peel apart this dish with your fork. 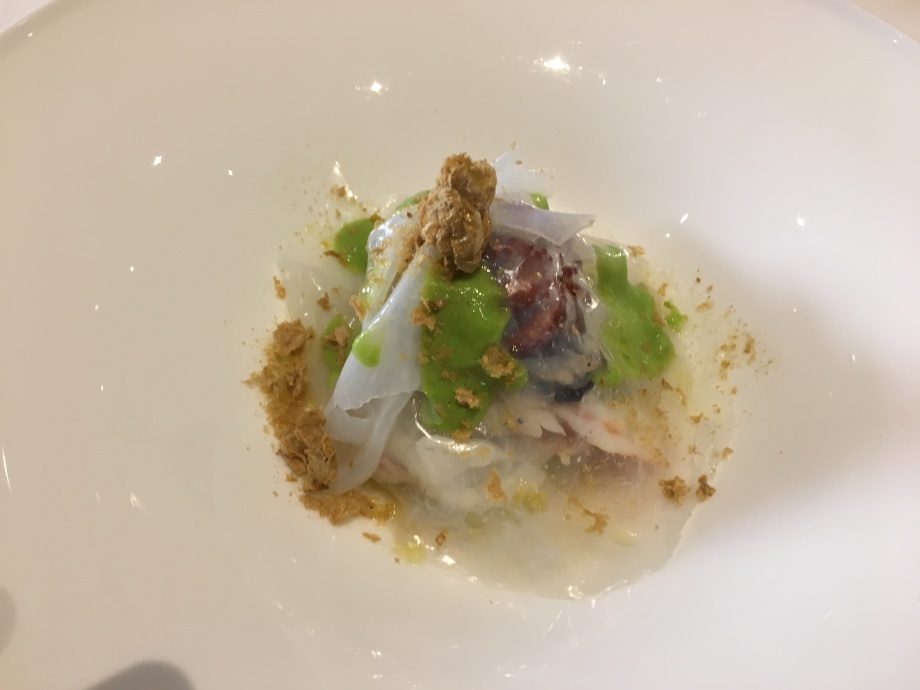 Then another interpretation of an octopus on a rock.

Like you were just walking along the beach as a child and you look at a rock in a tide pool and there is an octopus there.

Do not be fooled by how simple this looks. He takes the most iconic Italian dishes and makes them from scratch with such subtlety that it elevates them to another level. The images do not do the flavor justice. Not that this does not look good, but it’s hard to tell one Spaghetti with clams from another, it is such a mainstream dish.

Beef tenderloin with ash infused olive oil. Cooked on the grill with the potato that is supposed to smell like the Licata countryside. Simply seasoned with the course Sicilian sea salt that look like diamonds. Such a pure flavor delivery vehicle. I am telling you, this place is Sicily distilled. Like taking all the flavors of Sicily, distilling it into a shot of liquor and drinking it. It is meant to look simple and fool your eyes, but then when you taste you think to yourself, “what’s this feeling?”

Success. It’s evident by the look on our faces. Wait until dessert comes.

Ricotta cannoli cone with pistachio and orange marmalade. On the side a sorbet of 20-year-old Marsala wine. Wow, I kept going back and forth between the ice cream and the cannoli. Heavenly. I was zoning out like a child tasting ice cream for the first time. Time froze as I forgot where I was or who I was with.

A superb pannacotta with preserved cherry and what I thought was preserved quince. Pure, clean, refreshing. 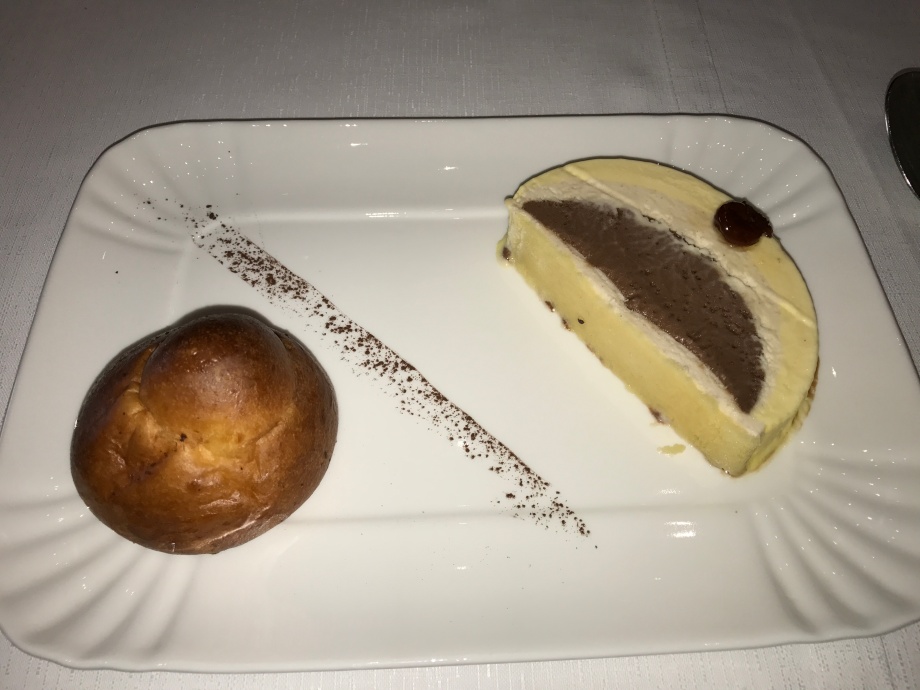 Marsala, pistachio and chocolate ice cream with brioche that looks like your classic Neopolitan ice cream cake you’d have as a child (see below). Only sans the artificial coloring, all ingredients are what they say they are.

Upon my internet searches, I found another blog highlighting some other dishes that we did not get a chance to eat given the lower course lunch. But this blog did a good job at capturing the deliciousness of this place. 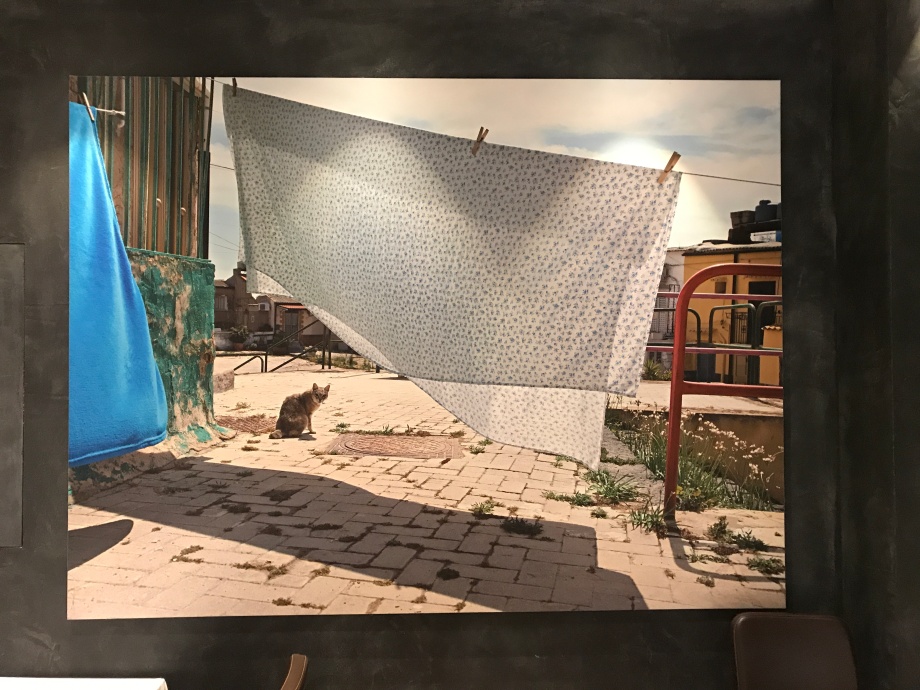 I imagined this photo was a scene of something from his childhood memory. Close your eyes and imagine yourself as a child running through the sheets flowing in the summer breeze. 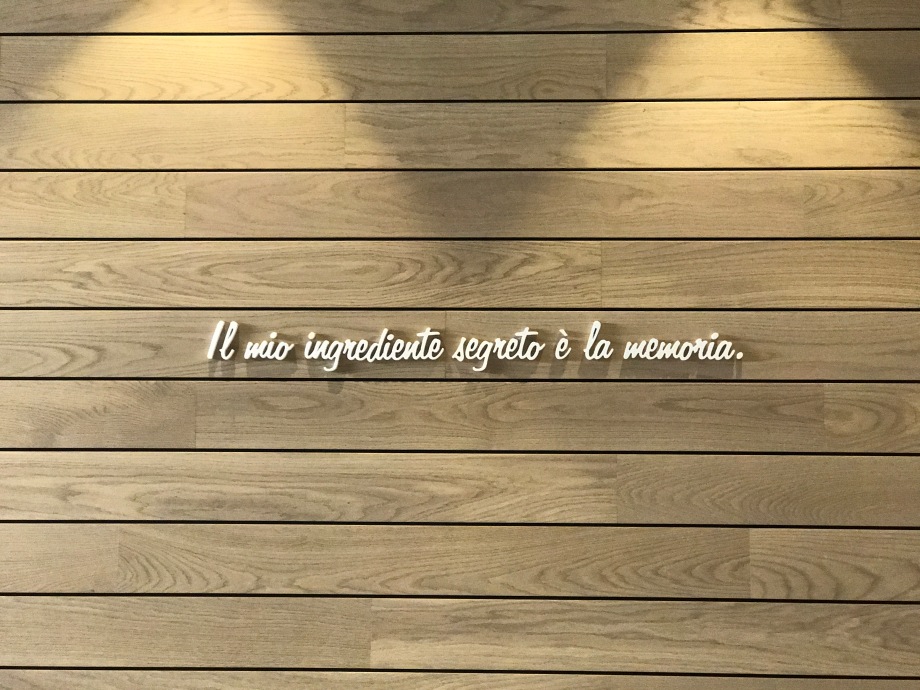 “My secret ingredient is my memories.”

We will definitely have Chef Pino in our memories.

Best meal in Sicily. Hands down.