Interesting story behind this place. When we initially trying coming here, five years ago, they were still newly opened and ranked #13 in the world on the San Pellegrino list, but now it’s #74 on the list. We ended up taking the metro from the CDG airport in Paris to the neighborhood of Saint Denis rather than Rue Saint-Denis, where our Airbnb was.

What resulted was a nightmare scenario leading to the most ghetto outskirts of Paris that I never even imagined in my worst nightmare. I’m talking nasty slum. I’m surprised we didn’t get jacked or shanked for our luggage. The further we walked from the metro the nastier the scenery got. We started walking past hoodlums huddled around burning trash cans. I think this was the neighborhood where they bombed the shit out of the terrorists that were behind the Bataclan shooting rampage.

It was the absolute worst case scenario of our first experience in Paris. To make a long story short, we missed our dinner reservation that night at Le Chateaubriand. So, talk about a long time coming, we were finally able to get reservations for dinner here. It took me three days of phone calls at odd hours of the morning trying to get the receptionist by phone after 30 minutes of a busy dial tone. They only take phone reservations, nothing online or via open table. AMEX platinum’s concierge couldn’t even get me a reservation, so this took a lot of personal scut work but I finally got a table.

The chef, Inaki Aizpitarte, is French-Basque, and coincidentally I have a video of him and his family that was shown at the Mesamerica food festival in Mexico City in 2012 called “piece of heaven” about the famous dessert he is known for making.

After seeing this video I was craving this brûléed egg yolk so bad, but we had no idea that he was the chef behind Le Chateaubriand. I thought it was an experimental culinary student’s dissertation or something. Here’s the video..

Compared to the bonanza of food we have been binge eating so far, it was important to put things into perspective here with regards to the courses. It was only five courses, and it was the cheapest meal of the trip at $65 euros per person. The most expensive wine on the list was only in the high $200 range, and all the wines were biodynamic, and some had some surprisingly good age on them, but the major faux pas was the small cafe wine glasses they served the wine in. That is a major Michelin rule violation already.

We did not even get a menu, we opted to be surprised and have them tell us what it was after we ate it, almost Omakase style. Here was the first dish. A cheese puff with poppy seeds. 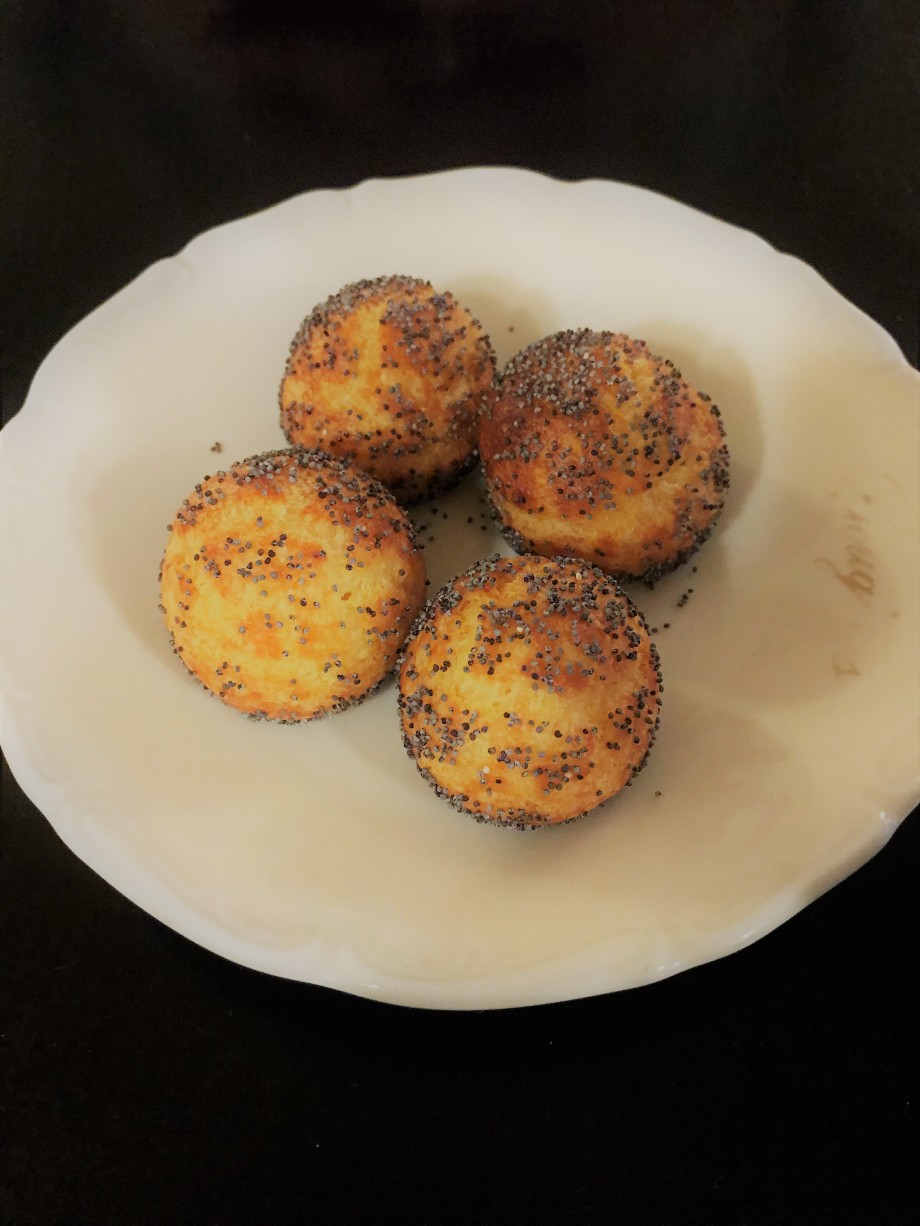 Then came a simple preparation of fresh from the market crab. I think it was a special seasonal crab from Brittany or something, I really was not taking notes, I was more laissez-faire on this night. I remember it being in some olive oil and lemon sauce, with fresh ramps, which is like wild garlic.

It was bloody hot this day, so this dish really hit the spot, especially with the 2008 Corton. 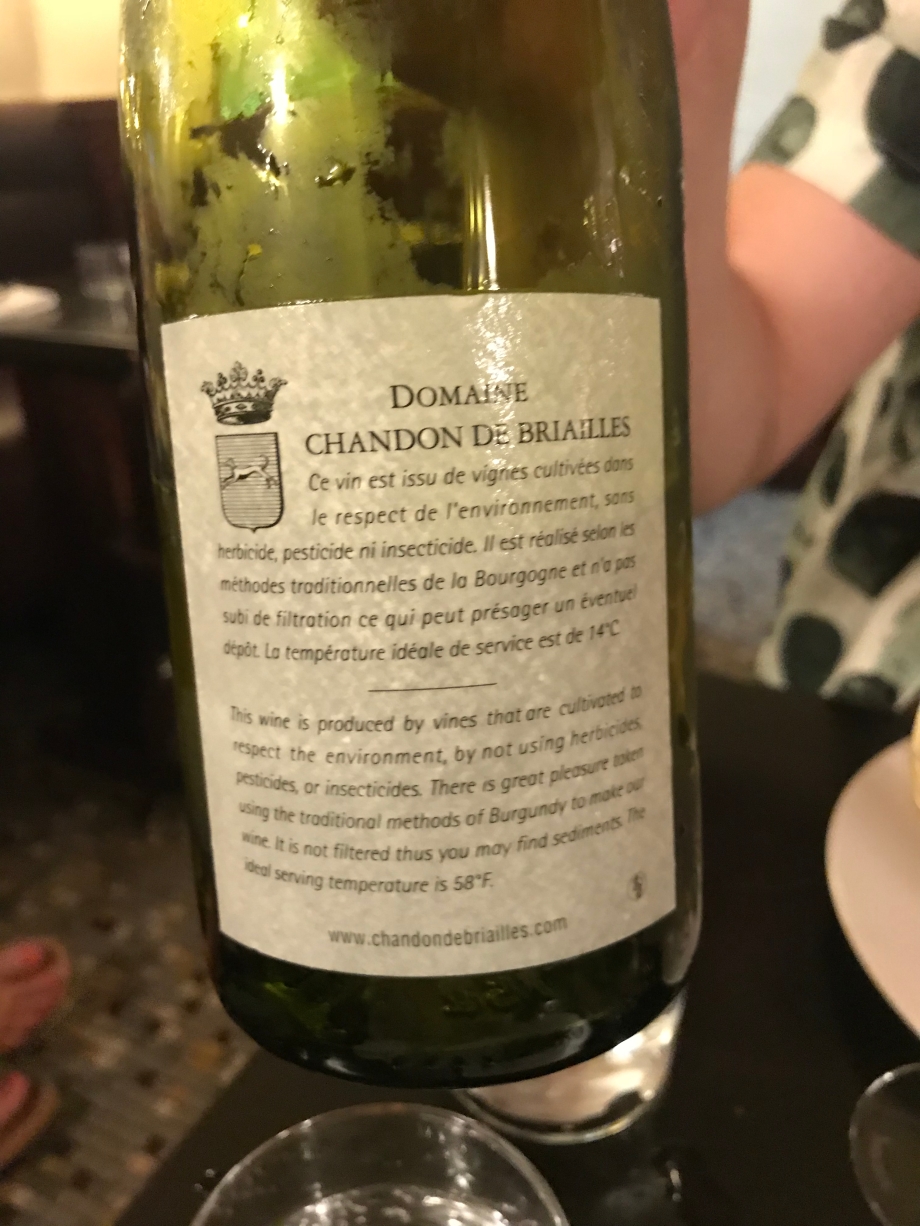 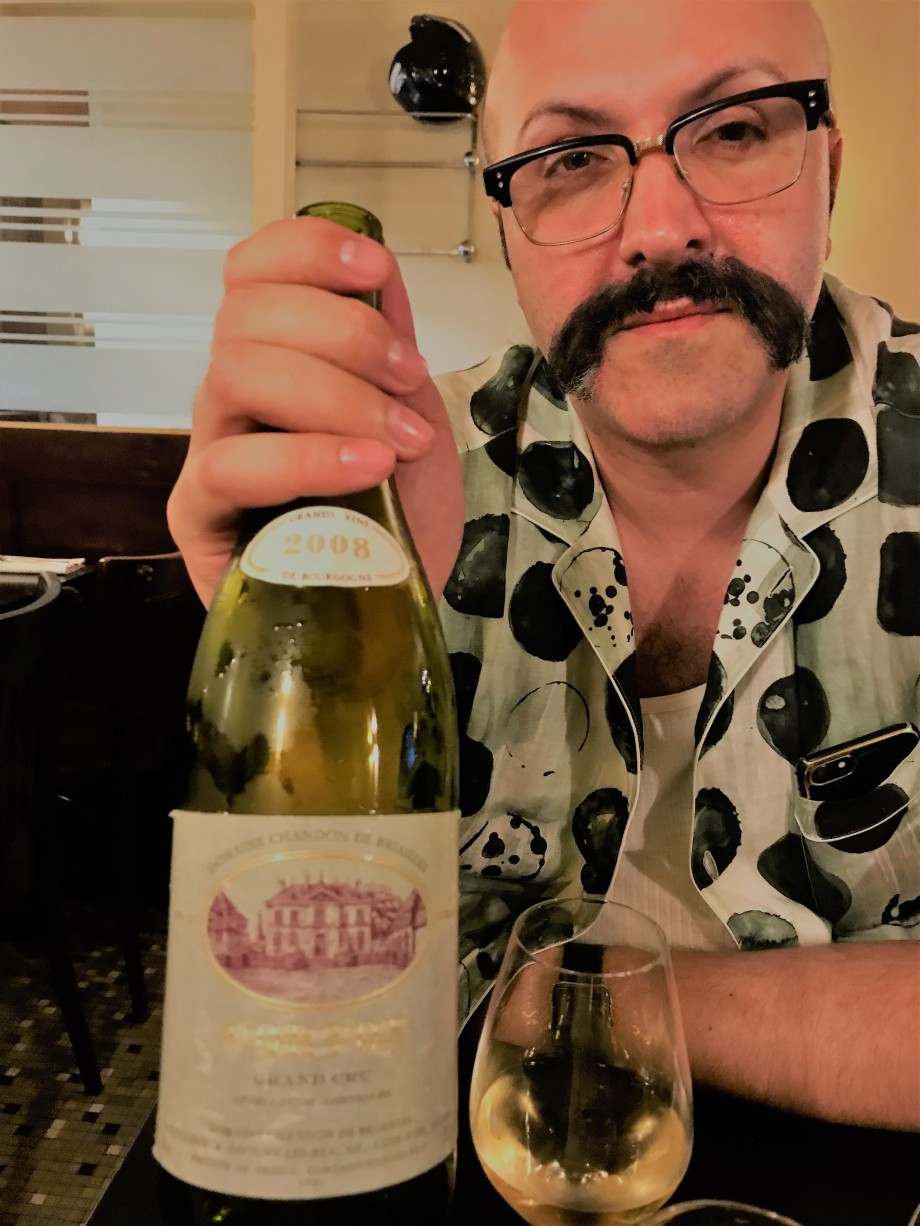 We had walked here and were tired and dripping with sweat. I looked like I walked straight out of bed in my Dolce and Gabbana pajamas and Erika was on safari. The chairs hurt my ass, the table was too low and narrow, but the crowd was international, young and good looking. We met a nice couple from Norway sitting next to us, Aron and Ane, and became Instagram friends. We were so jealous that for them, coming to Paris for the weekend, was like the same distance as going to Vegas for us in Los Angeles. 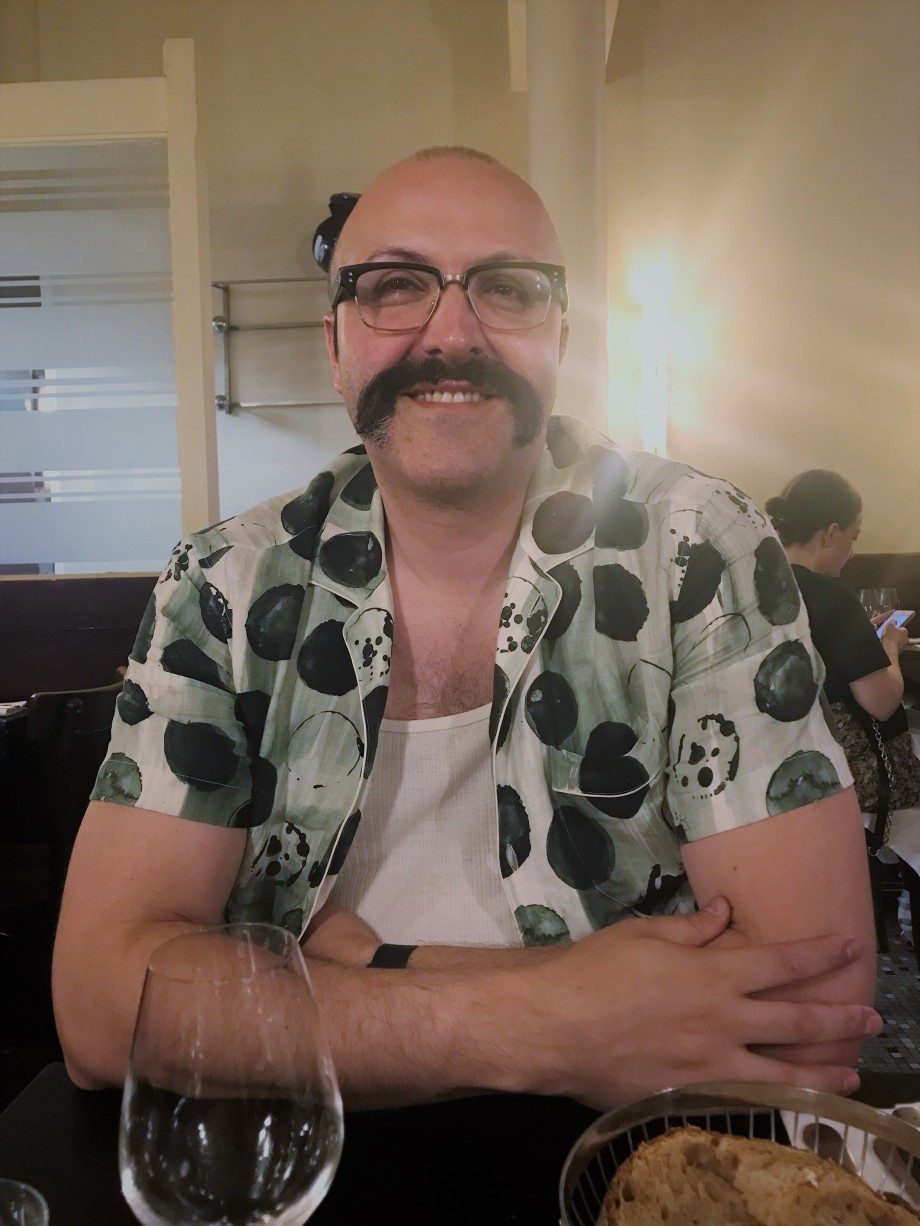 It was a super casual vibe here. I knew it was going to be gastropub-ish with 20 something heroin addict tatted hipster waiters that had a “too cool for you” attitude, so I didn’t even bother buttoning up my shirt, fuck ’em. We’re reaching an age where we don’t need to deal with that nonchalant attitude that these Millennials have. Although some people like the middle finger to the old guard Michelin stuffiness, the polar opposite of that is not any better. 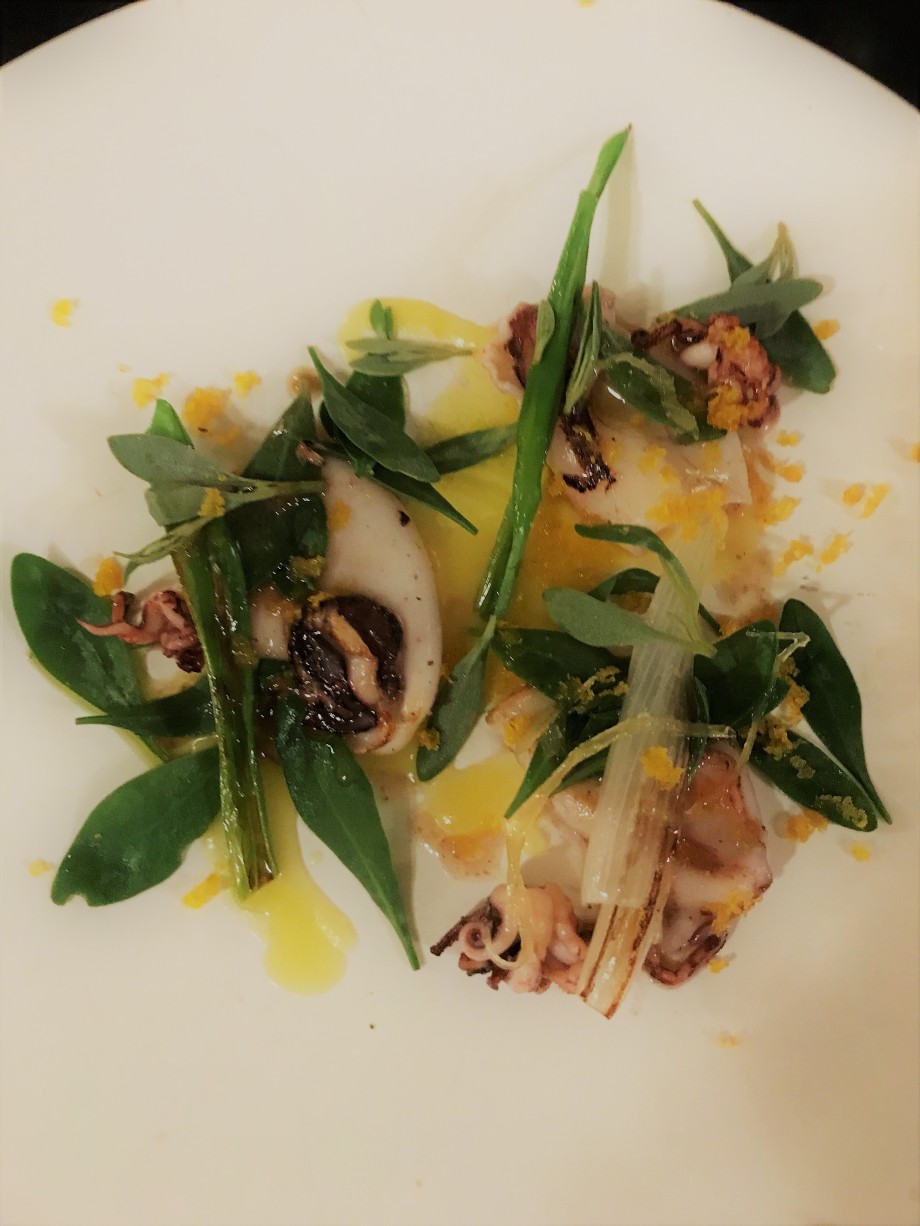 I remember this dish as being exceptional. The squid still had the charcoal flavor and the slimy leeks just provided such umami with the texture of the squid. They went masterfully together. Killer combo with the Corton as well.

Then came the skate wing with squash, and squash flowers. I can’t remember this dish very much. I think it was kind of on the bland side.

We got a bottle of some Right bank 2000 Bordeaux, which was an exceptional vintage. I think the 2000 and the 2010 vintages of Bordeaux were some of the best of all time, but the 2000 vintage had legendary status, which is why I did not hesitate to get this. It was good, but the nose was lost in these little shit glasses they had. We got this bottle so late in the dinner that we could not finish it and shared it with Aron and Ane. It went well with the duck dish very well, however. 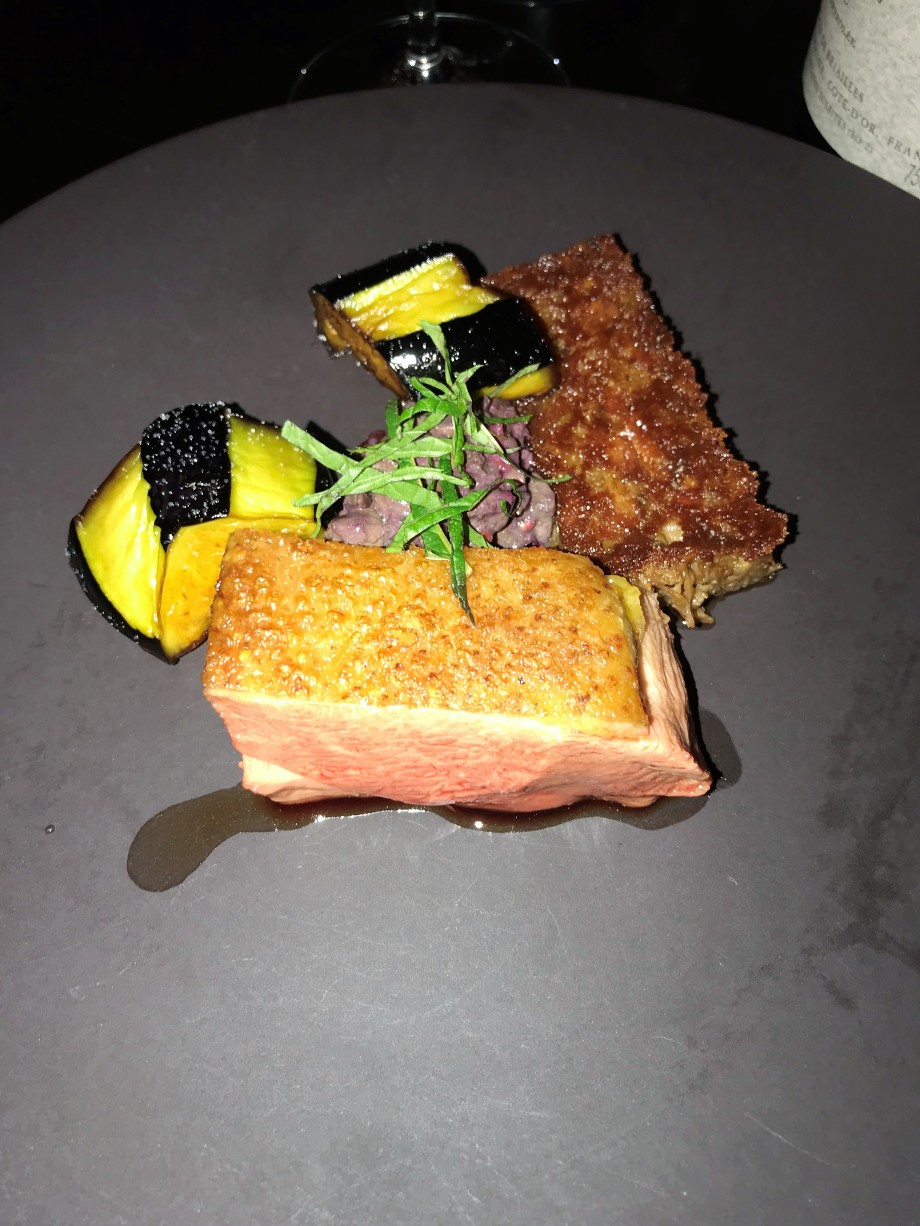 I loved the combination of the eggplant, with some sort of miso glaze with the duck. I think it came with a little bit of beluga lentil. The duck was cooked to perfection I would have to say, and was probably the best dish of the night.

Then their amazing dessert, the “Piece of Heaven” as seen in the documentary above. It’s amazing that this is just an egg yolk with sugar that creates a marriage made in heaven with the addition of a blow torch. I believe it is sitting on top of an egg white meringue under a piece of flan or just liquid caramel. I was finally able to eat what I first saw being made on the video from 2012. Think about the different textures and ingredients for a moment. The meringue was hard and made from the egg white, yet the caramel soft and warm, made by cooking and reducing pure sugar, and the egg yolk was served as is, just bruleed with sugar on top. Only two ingredients, yet look at the complexity. This dessert was like a stroke of genius.

Overall, the food was very good, and for the price probably the best bang for your buck in Paris. It is really a pain in the ass to get a reservation here though, and the service is just way too casual and nonchalant for our taste. It’s also only five courses, and the atmosphere is not very comfortable. It’s hot inside with no AC, chairs are uncomfortable, wine glasses not appropriate for the type of wine, and the service is kind of slow and irreverent. But, as long as you know what to expect there is no disappointment. Looking back now after some time has gone by, the dishes were not really that memorable other than the duck and the dessert, so I don’t know where the top 100 in the world rank came from. Come here if you have the time, but it does not leave a lasting impression.